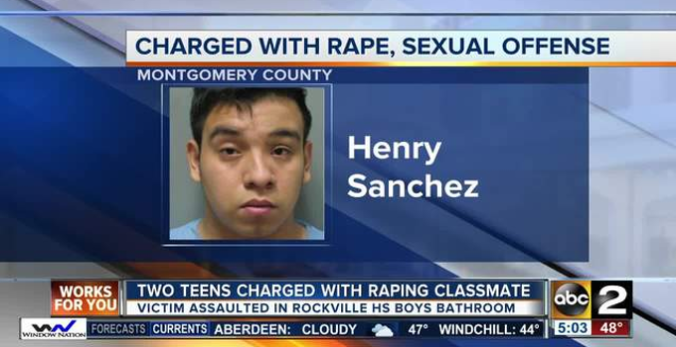 Two young men, ages 17 and 18, were enrolled as freshmen at a public high school in Rockville, Maryland after being detained and then released by federal immigration authorities. Both were in the country illegally. The students forced a 14-year-old girl into a bathroom stall at the school raped her, sodomized her, and forced her to perform oral sex on them  as she cried out for them to stop, according to police reports. Police collected blood and DNA at the scene.

Were you aware of this case? I wasn’t, and I live in the D.C. metro area, which includes Rockville. I wasn’t aware, apparently, because I have personally boycotted Fox News as a regular news source, relying instead on the straighter Fox Business channel and some equally biased sources that don’t prominently employ the likes of Sean Hannity, Bill O’Reilly, the Fox and Friends smarms, or encourage sexual harassment of female personnel.

The Washington Post wrote about the case, but relegated the illegal immigration component to afterthought status. Doing this made it a local story only, and the headline, “Two Rockville High students arrested for allegedly raping classmate at school” made it an easily ignored story. I assume high school students are periodically raped; I assume that, as in college, students occasionally falsely claim rape; I assume that it’s a big country, and bad stuff happens. The Post doesn’t mention the illegal immigrant angle until after 224 words. Without that aspect, the story can not be called national by any stretch of the imagination.

The New York Times noted, in a feature about Fox News coverage, that

“[T]here was also considerable time given to topics, like a rape case in Maryland, that viewers would not have heard about if they had turned to CNN or MSNBC. The rape case, which involved an undocumented immigrant and went virtually uncovered on most networks, received almost hourly updates on Fox, and at times was used as proof that Mr. Trump’s calls for tighter borders and a crackdown on immigration were justified.”

That’s a fair assessment of the tone of the Fox  coverage, as I have checked it on YouTube. Of course, one incident doesn’t prove anything: that kind of coverage is why I don’t watch Fox. This story does have a res ipsa loquitur aspect to it, though: if the US enforced its immigration laws sufficiently to stop these two rapists from slipping through the cracks, this 14-year-ol girl would not have been raped, at least by them. The Times also was correct: none of the major news networks covered the story, and it sure wasn’t going to be mentioned where hip millennials get their news, the comedy shows. Ah, but those stories of the poor, oppressed, good illegals are newsworthy, and covered everywhere.

Does that seem like objective, balanced, ethical news coverage to you? Because it isn’t. END_OF_DOCUMENT_TOKEN_TO_BE_REPLACED 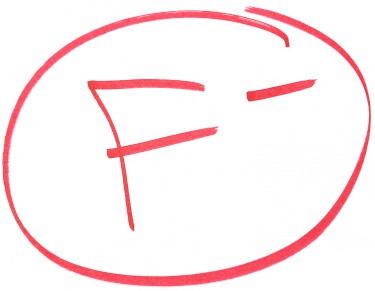 One litmus test I have for whether individual Democrats, liberals and progressives have integrity and  can be trusted is whether they will admit that the left-leaning bias in the mainstream media is wrong and intolerable….and is real. It is amazing and depressing how few pass that test. For until liberals demand fairness and objectivity from journalists, the chances that the mainstream media will see the importance of reforming and actually following their own codes of ethics are nil.

The self-exiled Barry Deutsch, a perceptive and intelligent leftist cartoonist/blogger  (it’s a good blog) who once was a prolific commenter here, flunked the test repeatedly, which I found perplexing. Barry is an honest man. Why couldn’t he see it? Was it because his own bias is so strong that what the news media produced as slanted reporting seemed fair and accurate to his similarly slanted worldview? Was it that he is so far left that the news media seemed conservative to him, so the frequent, throbbingly obvious examples of the news media being left-biased—the cheerleading for Obama’s election, the relentless savaging of Sarah Palin, the open lobbying for the ACA, climate change legislation, gay marriage and gun control, the embargoes on coverage of scandals that would have attracted Watergate-level scrutiny in a GOP administration, like the IRS scandal, and much more) didn’t compute?

I still don’t have an answer, and Barry is gone, without ever supplying me with a plausible answer.

I have to think, however, that even Barry would have a hard time denying this example, neatly flagged by Elizabeth Rice Foley. She writes, on Instapundit this afternoon: END_OF_DOCUMENT_TOKEN_TO_BE_REPLACED 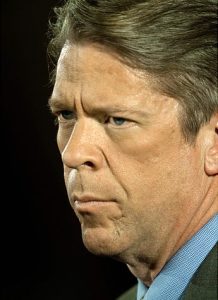 During President Obama‘s Iran deal press conference,  CBS’ Major Garrett broke ranks with his softball lobbing colleagues  by asking, “Why you are content with all the fanfare around this deal to leave the conscience of this nation, the strength of this nation unaccounted for in relation to these four Americans?”

President Obama flared, reprimanding the reporter by snarling, “That’s nonsense, and you should know better.”

Garret was immediately criticized for being disrespectful. CNN’s Dana Bash criticized her colleague,  opining that “There’s a fine line between asking a tough question and maybe crossing that line a little bit and being disrespectful, and I think that happened here.” Bill Maher ran to fetch the typical weapon of last (first?) resort employed by Obama apologists since January, 2009: the race card. “Major Garrett is a huge asshole,” he tweeted.  “If U wanna “strike a nerve” with POTUS, why not just scream the N word? That should get his attention.” Garrett has been unapologetic.

No doubt: it was a hostile question. A decade or more ago, I might have thought it crossed a line. But the issue Garrett raised was an important and obvious one in the context of the President once again cockily taking a victory lap over a dubious achievement, and for this citizen, at least, it gave me hope that the mainstream media’s days of serving as a virtual Pravda to a leader’s every move might be slowly coming to an end. The media’s deference to this President has been disgraceful and has undermined our democracy, public discourse, trust in the press  and the right to know what our government is doing. CBS’s Steve Kroft actually admiited—proudly!—that his “60 Minutes” was a favored venue for Obama because he knew that he would be treated with kid gloves. END_OF_DOCUMENT_TOKEN_TO_BE_REPLACED

1. After the 2006 election, in which a Republican majority in the House and Senate became a well-deserved minority, the losing Republicans, in sharp contrast to their Democratic brethren after their losses in 2000 and 2004, were remarkably frank and gracious. I wrote on November 15, 2006…

When the Democrats were rejected at the polls in 2004, they and many of their supporters in the media declared that it was proof positive that the U.S. public was stupid, ignorant, and reckless. Many claimed that the election must have been rigged; others announced that the U.S. was a lost cause and that good people should consider moving to Canada. Some actually did.

The Republicans, who were resoundingly punished at the polls for everything from corruption to arrogance to incompetence, could not present a more dramatic contrast to their Democratic counterparts. They overwhelmingly placed responsibility for their losses squarely on their own mistakes and transgressions, where it belongs. They congratulated their victorious opponents. They avoided making legal challenges or suggesting that any elections were “stolen.” Defeated Republican Senator George Allen, whose race was close enough to demand a recount, did not. And no Republicans, as far as we know, have fled the country. They will be staying around to contribute to the process of democracy, because they respect both it and its results. In short, the Republicans have demonstrated the honorable and ethical was to lose.The deportment of the losers in a democracy is every bit as important as the behavior of the winners. As the Democrats attempt to teach their rivals something about how to govern when you win, let’s hope that they learned from the GOP’s lesson in how to behave when you get throttled. Some recent Canadian immigrants might think about it as well.

Will Democrats be model losers as well?

My head hadn’t exploded for a while, and I thought perhaps it had built up some immunity from the detonating effects of ethics breaches that defied all reason. Then I read this in Politico:

He will start Wednesday night as President Barack Obama makes a primetime statement about the Islamic State of Iraq and the Levant , Sam Feist, CNN’s Washington bureau chief said in a statement.

“Jay’s unique experience as both a journalist and a White House press secretary make him an invaluable voice for the network as we cover the final two years of the Obama Administration and look ahead to the coming campaigns,” Feist said. “We’re fortunate to have Jay on our air tonight to provide analysis and insight surrounding the President’s address to the nation.”

Get the squeegee and the ladder, hon—my brains are on the ceiling.

END_OF_DOCUMENT_TOKEN_TO_BE_REPLACED

The headline, on a story appearing on page A4 of today’s Washington Post: “Obama’s Critics Have Not Visited The Border Recently.” (Note: the online version headline is a little different.)

How odd, and how revealing. Apparently White House and Democratic talking points will now be published in headline typeface by D.C.’s iconic, once trusted, newspaper. What? END_OF_DOCUMENT_TOKEN_TO_BE_REPLACED

Who approved the playing of Aerosmith’s “Dude Looks Like A Lady” over photos of convicted Wikileaks leaker Bradley Manning in uniform and in feminine make-up and garb? Fire him.

This isn’t professional, and it isn’t the proper role of journalists to mock the gender identity issues of public or private individuals. Fox is playing to the worst of its core conservative audience, the gay- and trans-hating troglodytes, and thus embraces bigotry as reasonable and humorous. Manning’s sexual problems are of tangential news value, and to the extent that they are, they should be treated with sensitivity and respect, with Fox’s goal being to educate its audience, not to play playground tease.

It would be impressive and appropriate if one of the more responsible, independent Fox on-air personalities—Shep Smith? Megyn? O’Reilly?—would chide their network for this. They should be embarrassed.