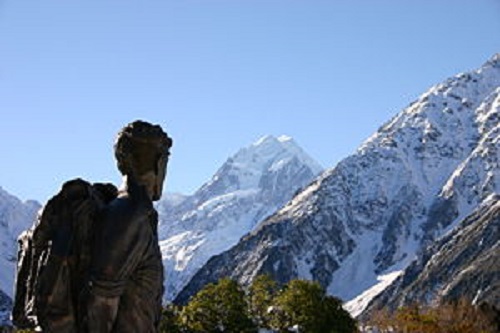 This post was supposed to go up yesterday, May 29, but as has happened too often in recent months, the vicissitudes of existence got in the way of Ethics Alarms. May 29 is the anniversary of the epic moment when, at 11:30 a.m. on May 29, 1953, Edmund Hillary of New Zealand and Tenzing Norgay, a Sherpa of Nepal, become the first explorers to reach the summit of Mount Everest. At 29,035 feet above sea level, the peak of Everest is the highest point on earth. Hillary and his Sherpa guide were part of a British expedition, and the two completed their successful assault after spending a perilous night on the mountain at 27,900 feet.

Hillary’s tribute is included in the The Ethics Alarms Heroes’ Hall Of Honor, but for several years had been unavailable, unbeknownst to me, because I hadn’t connected some dots. The essay about him was a link to my 2008 post on the predecessor of Ethics Alarms, The Ethics Scoreboard, which was offline. I had forgotten that (and if anyone tried to access the article and failed, they never let me know), so the first Ethics Hero to be awarded that Ethics Hero Emeritus title was also the only such hero dishonored by my carelessness.

The Ethics Scoreboard is back online (and worth a visit), but I am finally putting the 2008 piece here, on Ethics Alarms, where it should have been long ago.

END_OF_DOCUMENT_TOKEN_TO_BE_REPLACED

[ The discussion in the earlier post today regarding ABC’s revolting “What Would You Do?” convinced me that I should re-post this essay about a real-life “What Would You Do?”tragedy, which originally appeared on The Ethics Scoreboard in 2006.  Entitled “Death on Everest,” It has been lightly edited to bring it up to date.]

As 34-year-old mountaineer David Sharp lay near death on Mount Everest, over 40 other climbers trudged past him on their march to the peak. All had oxygen with them, and a few even stopped briefly to give Sharp a few breaths. But still they climbed on, and Sharp perished. His demise on May 15, 2006 has gone into ethics lore alongside the infamous death of Kitty Genovese on March 13, 1964. Genovese was murdered outside her apartment building in Queens while thirty-eight neighbors watched and did nothing.
The two incidents stem from very different causes, however. While Genovese’s death was fueled by urban fear and apathy, a mass failure of courage and the willingness to assume responsibility in a crisis, Sharp was the victim of that universal ethics-suppressant, the powerful non-ethical consideration. END_OF_DOCUMENT_TOKEN_TO_BE_REPLACED