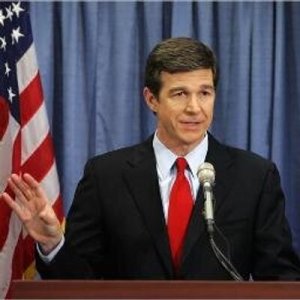 A candidate masquerading as a lawyer…

Roy Cooper, North Carolina’s elected Attorney General, has so many conflicts of interest that he can’t credibly do his job in an ethical manner. Fortunately for him doing his job ethically seems to hold no interest for him.

To start with, he is an announced political opponent of the current Republican governor, Pat McCrory. This situation is not unique, but if an Attorney General is going to do his job ethically, for remember he is the state’s lawyer, he has to make an effort to put his political interests aside and not allow them to interfere with his duty to represent his client the state, whose voters have made McCrory its top decision-maker.

Cooper, however, isn’t making any such effort. House Bill 2, a state law passed last week that bars local governments from enacting nondiscrimination protections for the LGBT community, is anathema to Cooper’s constituency, so he is refusing to defend it in court against a federal lawsuit. If he were a private attorney whose beliefs rendered it impossible for him to represent his client, Cooper would have to resign. Since he is elected, he need not do that, but he can’t actively interfere with his client’s legal needs either. His proper course under the legal ethics rules governing all lawyers would be to find an outside counsel to do his job in this case, since he is incapable of doing it, and to defend the law.

Instead, Cooper is actively undermining his client’s legitimate objectives.  Cooper said in a news conference that the law is a “national embarrassment” and it “will set North Carolina’s economy back if we don’t repeal it.” That’s the candidate talking, not the state’s lawyer, and thus the state’s lawyer is engaged in a bright-line breach of loyalty by talking like that in public. His duty, and his only ethical option, is to shut up. He may not be able to support his client’s objectives, but he absolutely must not impede them.

Cooper has even gone beyond that ethical violation to a massive conflict of interest breach. Instead of defending McCrory, the Board of Governors and the others being sued in the federal lawsuit, Cooper has announced that he will defend the two LGBT people and the lesbian professor bringing the lawsuit against the state! END_OF_DOCUMENT_TOKEN_TO_BE_REPLACED 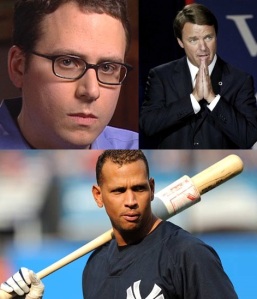 Question: Which two men are fit to practice law? (It’s a trick question…)

The Wall Street Journal Law Blog muses on an issue that has troubled me for a long time: the fact that the legal profession allows people to keep practicing law whose conduct would have kept them out of the profession had it occurred before they were lawyers.

The reason for the current examination is the apparent inconsistency of disgraced New Republic journalist Stephen Glass continuing to fight and uphill battle (and, I think, doomed) to be admitted to the California bar, while lying scum-of-the-earth John Edwards still has his law license and is opening up a new practice in North Carolina. I wrote about Glass here, and Edwards here.

In the Journal piece, estimable legal ethicist Stephen Gillers opines that the different standards applied to Glass and Edwards are paradoxical,  with the law grads entering the profession being held to more stringent ethical standards  than a veteran attorneys. “If anything, you might say it should be the opposite,” he says.

Especially if the veteran lawyer is a high-profile, national figure who makes every other lawyer want to crawl under a rock… END_OF_DOCUMENT_TOKEN_TO_BE_REPLACED

The last shoe dropped in the sordid John Edwards tale, with his admission that he was indeed the father of his mistress’s infant daughter, as many suspected. This comes months after he emphatically and repeatedly denied this fact to the media, in the course of admitting that he indeed did have an affair with the child’s mother, Rielle Hunter, after months of denying that. His efforts at covering up all of this ultimately incorporated his terminally ill wife, his friend and supporter Fred Baron, who paid his mistress to make herself scarce, and his aide Andrew Young, who was induced to publicly claim that he, not Edwards, was the father of baby Quinn. All of the deception initiated by Edwards took place while he was running for the Democratic presidential nomination, on a platform of moral obligation and justice. END_OF_DOCUMENT_TOKEN_TO_BE_REPLACED

To someone passionately devoted to the belief in God and Christianity, the thought of having one’s city governed by non-believers may be repulsive. Unfortunately for the sensitivities of those facing this dilemma, the founders of the United States of America were quite specific about the irrelevance of religious belief to civic participation and the rights of citizenship. That may not stop some self-righteous political opponents of Ashville, N.C. City Councilman Cecil Bothwell, who says he doesn’t believe in God but who was duly elected in November, from trying to sue the city for its failure to abide by an archaic, and undeniably unconstitutional, state law forbidding atheists from holding office. END_OF_DOCUMENT_TOKEN_TO_BE_REPLACED