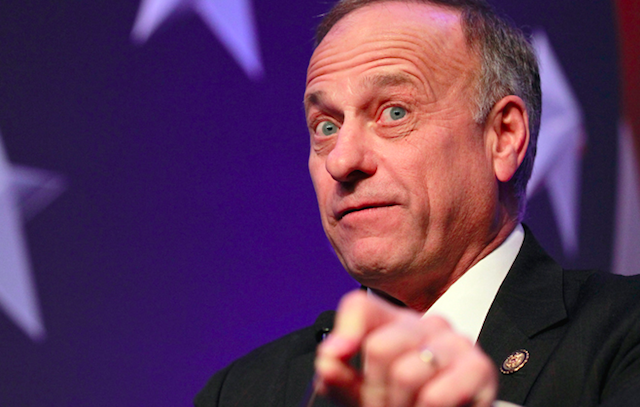 I wrote earlier today that the Rep. Steve King (R-Iowa) situation had become a full-blown Ethics Train Wreck, and that is true. It is an ETW because there is virtually no way one can get involved with the controversy in any way and not risk blundering into unethical conduct. If one rushes to condemn the Iowa Congressman without examining the evidence, that is unfair. If one tries to excise him from his position before the end of his term without more than just an objection to his choice of words, one is interfering with the free choice of his constituents regarding whom they want representing their interests in Washington. If one attempts to defend him, there is a risk of rationalizing and excusing bigotry on the part of a lawmaker. If one sides with his critics enemies, one may be facilitating a cynical effort to mis-characterize King and distort his sentiments to use him as a weapon against President Trump, Republicans, and conservatives generally, for “Trump, Republicans and conservatives endorse racism and white supremacy” is one of the loudest narratives that has been promoted since the 2016 election and before.

Let us not forget that King himself started this train wreck rolling with his own careless and defiant rhetoric. His latest was a quote from an elusive interview in the New York Times, in which King said,

Despite King’s protestations that he had been misunderstood, Republicans, Democrats and the news media condemned his statement as racist, and he was stripped of all committee assignments by his party, as Democrats readied an attempt to have him formally censured.

It is not difficult to clarify the difference between an admiration for the amazing and undeniable achievements of Western culture, and a belief that the color of the people responsible for building it was a factor in its success. Despite the fact that King raises the issue frequently, however, he has somehow never managed to make the distinction clear. There is therefore a rebuttable  presumption that he doesn’t believe there is a distinction. The alternative is that he, much like the President of whom he was an early supporter, lacks the command over the language to explore such distinctions competently. If that is true, then he is disrupting national discourse and seeding division and hate through incompetence.

I regard King as a less articulate, less intelligent, less amiable version of Pat Buchanan, the conservative gadfly and pundit who helped defeat George H.W. Bush’s bid for reelection and who inadvertently helped elect his son President. Buchanan is an anti-Semite, a xenophobe, a homophobe and a racist. He is very clear that he regards immigration as a threat to what he believes must be a Christian, white, European-dominated culture in the U.S. Unlike King, he is direct and unambiguous about it:

There are many quotes like these, for Buchanan writes a lot. As you probably noticed, either King reads a lot of Pat’s work,  he thinks the same way without quite being able to express it clearly or perhaps he doesn’t have the courage that Buchanan has to say what he believes and accept the consequences. Some of those quotes sound a lot like King.

What makes it difficult to accurately and fairly define what’s wrong with King’s statements through the years, in addition to his own lazy speech habits, is the ongoing tendency of the leftward, anti-conservative news media to assert that statements that are not racist are, and indeed to obliterate any precise meaning of racism into convenient vagueness. For example, a New York Times article called “A History of Steve King’s Racist Remarks” almost convinced me to defend King. It is incredible that the Times would be so dishonest, inflammatory and unfair as to assemble the “remarks” it chose under the description of “racist.” The fact that it would tell us more about the biases and untrustworthiness of the Times than it does about King. The problem is that while the Times and others will claim that almost anything King (or Donald Trump) says is proof of racism, there are enough real racist and xenophobic sentiments in the mix to justifiably conclude that King is Buchanan II.

“Mr. King, in the Iowa State Senate, files a bill requiring schools teach that the United States “is the unchallenged greatest nation in the world and that it has derived its strength from … Christianity, free enterprise capitalism and Western civilization.”

Not racist. Not even close.

Again, not even close. Many people of good faith, including me, believe that the U.S., its culture, education and commerce would be well served by declaring English to be the official language.

Mr. King sues the Iowa Secretary of State for posting voting information on an official website in Spanish, Laotian, Bosnian and Vietnamese.’

On the House floor, Mr. King demonstrates a model of a 12-foot concrete border wall topped with electrified wire that he designed: “We need to do a few other things on top of that wall, and one of them being to put a little bit of wire on top here to provide a disincentive for people to climb over the top or put a ladder there. We could also electrify this wire … We do that with livestock all the time.”

Oh, I get the theory: the Times is implying that King is comparing illegals to animals. No, he’s comparing fences.

Mr. King on the House floor, speaking of how law enforcement officers can spot undocumented immigrants: What kind of clothes people wear … what kind of shoes people wear, what kind of accent they have … sometimes it’s just a sixth sense they can’t put their finger on.

Apparently the Times thinks that even discussing illegal immigrants is racist. Seriously, how is this a “racist remark’?

Mr. King in a speech opposing the Affordable Care Act’s mandate to cover contraception: Preventing babies being born is not medicine. That’s not constructive to our culture and our civilization. If we let our birthrate get down below the replacement rate, we’re a dying civilization.

Race isn’t mentioned or alluded to, yet the Times calls this a “racist remark.” Amazing. Nah, there’s no mainstream media bias!

On a panel at the Conservative Political Action Conference with Peter Brimelow, an open white nationalist, Mr. King referred to multiculturalism as: a tool for the Left to subdivide a culture and civilization into our own little ethnic enclaves and pit us against each other.

Is any statement to a white nationalist “racist”?

Mr. King on why he opposes legal status for Dreamers, who were brought into the country as children: “For everyone who’s a valedictorian, there’s another 100 out there that weigh 130 pounds and they’ve got calves the size of cantaloupes because they’re hauling 75 pounds of marijuana across the desert. Those people would be legalized with the same act.”

I don’t know what to make of that one, but the Times seems to believe that anyone opposing the “Dreamers” is a racist. END_OF_DOCUMENT_TOKEN_TO_BE_REPLACED

“Loyalty is the heart of Pat’s being. He is loyal to country, to church, to neighborhood to heritage. To Pat, the world can never be better than the one he grew up in as a young boy. Blessed Sacrament Church and Grade School, Gonzaga High School, Georgetown University. No country will ever be better than the United States of America of the early 1950s. It’s his deep loyalty to preserving that reality and all its cultural and ethnic aspects that has been his primal purpose and is what has gotten him into trouble. Not just now but over the years.”

—MSNBC talking head Chris Matthews, in his wistful on-air tribute to Pat Buchanan, who was fired from his long-time role as the left-wing network’s token hard-right conservative.

"Pat, I may disagree with what you say, but I will defend to the death your right to say it...on some other network."

Matthews’ quote helps explain why loyalty is the most corrupting of the ethical virtues. Loyalty is important and admirable, but when it is divorced from the other values, it can lead to rigidity, stubbornness, and corruption. When a person, organization or cause no longer embodies the qualities that justified the loyalty in the first place, loyalty can undermine ethical conduct as strongly as any vice.

The right is attempting to frame Buchanan’s dismissal as part of a conspiracy to silence conservative voices. I never understood why Pat was on MSNBC anyway, unless it was to have a particularly Jurassic conservative around to make MSNBC’s extreme liberal bias look reasonable by comparison. It was Buchanan’s latest book, “Suicide of a Superpower: Will America Survive 2025?,” that finally triggered his ouster. I haven’t read it, but I’ve heard Buchanan on this topic sufficiently already. He may not be a racist, xenophobe, homophobe and anti-Semite, but his confusion of the need to hold on to American cultural values, with which I agree, with the need to keep America as white, Christian, heterosexual and Anglo-Saxon as possible is hard to distinguish from racism, homophobia, xenophobia and anti-Semitism. If I were running a news network, I wouldn’t employ him. END_OF_DOCUMENT_TOKEN_TO_BE_REPLACED