Signature significance on Ethics Alarms means a single aspect of an individual’s conduct that all by itself is proof positive of an untrustworthy character because an ethical individual will not behave that way ever, not even once. Trump hatred and the unquenchable desire to punish him for his very existence (and daring to be elected President, thus foiling Hillary Clinton’s dreams) was mostly the result of people living in an echo chamber and trusting a corrupt media: decent ethical people fell victim to Trump Derangement. But the determination to persecute him now cannot be excused. It is the mark of someone who has allowed, as Richard Nixon observed on the way into the helicopter, hate to destroy him. Such people are untrustworthy, and they show us the ugliness of irrational anger and bitterness.

Too many such people have power and influence right now.

A friend sent me this article in the Washington Post, my home-town paper whose unethical bias became so extreme that I switched to the New York Times, which is a bit like choosing a heart attack over brain cancer. It is quite amazing: in it, the art and architecture critic for the paper insists that Donald Trump should be blocked by law from having a Presidential library. Why? Oh, the critic says, Trump incited an “insurrection”! Besides, “even a privately funded and operated Trump presidential library, which would be devoted to whitewashing his record and rewriting history, is a terrible and even dangerous idea…. given Trump’s alleged misuse of charitable funds, including self-dealing, waste and other illegal activities, at his now dissolved New York-based foundation….” And “any intention to start another public entity can only be considered a crime scene waiting to happen.” Plus, “…the danger of Trump using a presidential library to burnish his image is far more serious, with the ex-president and his surrogates still promoting the idea that his electoral loss was somehow fraudulent. That creates an ongoing uncertainty in American public life, which Trump and even more unscrupulous actors will use to further division, inflame tension, exacerbate racism and delegitimize the American democratic system.”

END_OF_DOCUMENT_TOKEN_TO_BE_REPLACED 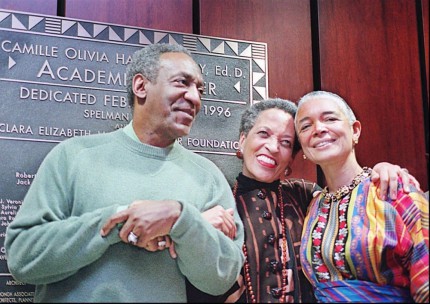 The Cosbys and Johnnetta Cole

When three new women accused Bill Cosby of sexual assault this week, the government’s Smithsonian Institution, “the nation’s attic,” suddenly found that it had been lured into assisting a clever PR ploy by the disgraced comedian. [ Full disclosure: I have worked for the Smithsonian recently, delivering a five hour lecture on the cultural and ethical influence of classic Western movies last December.] The revelations were the most graphic and disturbing yet ( Sample: “I was shocked. I didn’t know how I had lost so much time. My clothes were thrown all over the room and I felt semen on the small of my back and all over me…” ), and brought the total number of accusers near the half-century mark. Meanwhile, an exhibition of art owned by Bill and Camille Cosby will be on display at the National Museum of African Art until January 2016.

How many women will have come forward by then? Let’s start a pool! END_OF_DOCUMENT_TOKEN_TO_BE_REPLACED