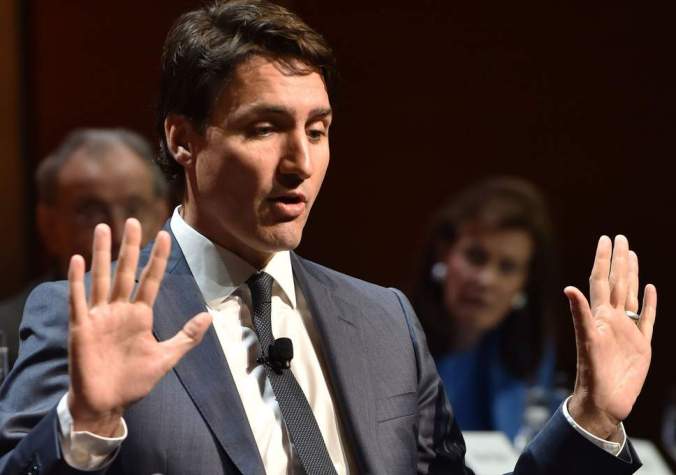 Canadian progressive rock star and Canadian Prime Minister Justin Trudeau is now dealing with his own #MeToo crisis, and, as you will see, not that well. These are old allegations, first appearing in a tiny community paper called the Creston Valley Advance in 2000 An unsigned editorial related that Trudeau, then a 28-year-old teacher, groped a young, female Advance reporter covering the Kokanee Summit Festival in Creston, British Columbia. The Creston editorial did not include details of the alleged groping incident, but wrote that the reporter involved felt “blatantly disrespected” and that Trudeau allegedly apologized a day later for “inappropriately handling” her.

Nobody cared. After all, Bill Clinton had just ducked impeachment because American Democrats and the news media successfully sold the narrative that a President using his intern as a personal sex-toy was “private, personal, consensual conduct.” The story was quickly forgotten.

Then came the Harvey Weinstein Ethics Train Wreck, and suddenly any male in power is vulnerable to having their career and reputation undone because of a recovered or re-evaluated memory they did that everyone winked at decades ago, but is now proof positive of a dark and irredeemable soul, or something. (This is the point where, if you are Prof. Paul Butler, you shout “Oh come ON!”)  The episode resurfaced recently when popular political commentator and Trudeau critic Warren Kinsella tweeted a picture of the editorial last month with the hashtag #MeToo. His tweet was later picked up by various conservative outlets. This is suddenly a problem for liberal leader who has proclaimed his feminist credentials. He has said that he has no tolerance for any kind of sexual harassment or unwanted touching.

And now this. Observations:

Translation of this self-contradicting double-talk:

Let’s see now: He doesn’t remember the event, which he remembers well, but not the incident, though he remembers that he apologized for it, though he is certain he did nothing that required an apology, but he can certainly understand how someone might see it differently.