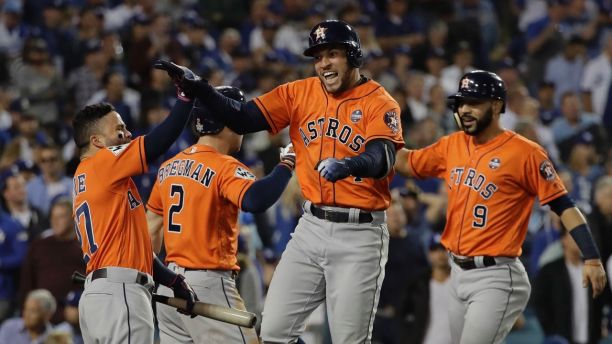 1 The 2017 World Series ended last night, with the Houston Astros winning a hard-fought and exciting seven game battle over the Los Angeles Dodgers.

Otto Von Bismarck famously observed that providence seemed to be looking out for the welfare of drunkards, fools, and the United States of America, and Major League Baseball should be added to Otto’s list. With the NFL simultaneously alienating civilized fans who don’t like seeing their heroes crippled for their entertainment, and more bloodthirsty fans who don’t want their entertainment polluted by half-baked political protests, baseball, whose ancient status as “The National Pastime” had been mocked as wishful thinking, entered the Fall at its best, and showed TV audiences a wild, passionate game featuring diverse and likeable players who seemed genuinely proud and privileged to be Americans.

2. From one of my smart, informed, anti-Trump obsessed progressive Facebook friends:

“So… we can talk about visa regulations right after an immigrant kills people, but we can’t talk about rational restrictions on guns when someone uses a gun to kill people?”

Rushing to take political advantage of a tragedy, as President Trump did by immediately using the terrorist attack in New York to push for his immigration reforms is, indeed, exactly as reprehensible whether it is done by Democrats or Republicans. A tactic sure looks uglier when it’s done to oppose your interests than when its done to advance them, isn’t it? (By the way, my friend, restrictions on immigration are not prohibited by the Constitution; “rational restrictions on guns,” aka “incremental elimination of the Second Amendment,” because it is now clear that this is the goal, is.)

“That’s not what he said,” Sanders replied. “He said that process has people calling us a joke and a laughingstock.”

In fact, the President had indeed said at the meeting, “We need quick justice and we need strong justice — much quicker and much stronger than we have right now — because what we have right now is a joke, and it’s a laughingstock.”