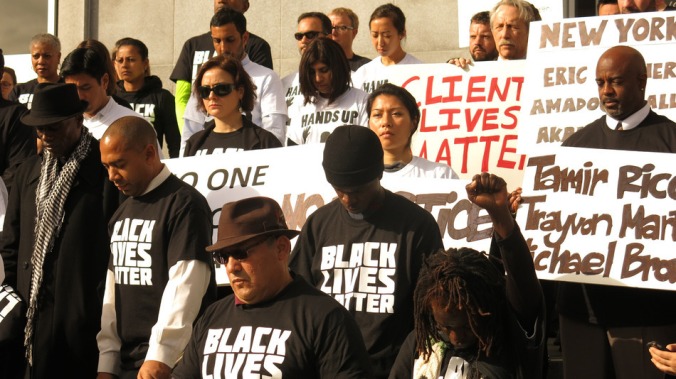 “[T]he DNC joins with Americans across the country in affirming ‘Black lives matter’ and the ‘say her name’ efforts to make visible the pain of our fellow and sister Americans as they condemn extrajudicial killings of unarmed African-American men, women and children.”

You think that having Donald Trump running (temporarily and momentarily) as a front-runner in the race for the 2016  Republican Presidential nomination is embarrassing for Republicans? That’s nothin’! The official endorsement of the racist, violence-promoting, anti-police and anti-rule of law movement Black Lives Matter ought to disqualify the Democratic Party as a trustworthy political organization until it stops pandering and apologizes for this statement.

Black Lives Matter is a racist, anti-white, hate-fueled organization that considers any law enforcement involving black criminals presumptively racist. The movement continues to rely on false and discredited media and activist narratives (“Hands up! Don’t shoot!”), citing “victims” like Michael Brown as the justification for its existence, presuming guilt in cases where the facts are uncertain or in legitimate dispute (Eric Garner was not “choked to death,” nor was he intentionally killed; Sonny Gray’s death is still unexplained; there is no evidence that Tamir Rice’s death was related to race). The primary result of the group’s efforts so far have been to increase racial tensions, to spark deadly attacks on police officers, and to cause a catastrophic rise in urban murders as police avoid proactive methods and stops involving black suspects to avoid becoming the next Darren Wilson. END_OF_DOCUMENT_TOKEN_TO_BE_REPLACED