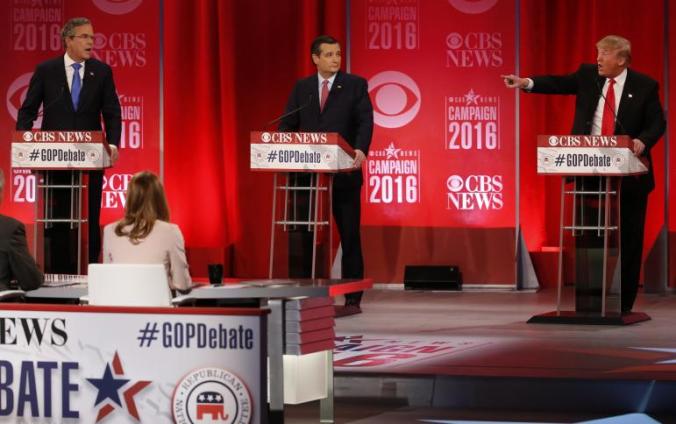 I knew this time would come, and it came the same week for both parties: I’m getting sick of the debates, and it’s harder and harder to find new illumination and conclusions with each one. For some reason, however—the effect of the unsettling news of Justice Scalia’s sudden death. perhaps?—last night’s Republican debate (transcript here) was nastier and more personal than any of the debates this cycle, and Charles Krauthammer may be correct that that it was the most ugly Presidential candidates debate ever.

1. This was 100% the fault of Donald Trump. I keep reading that the Republicans should be embarrassed—-what control does the party have over Trump? He’s in the race, and that means that he will drag down the conduct in the race. Arguing with him is like arguing with a 12-year-old—I was reminded of Erma Bombeck’s line that it is impossible to argue with a six-year-old without sounding like a six-year-old. Sometimes I think all the debaters should agree to turn their backs on Trump when he’s ranting, like all the jurors do in “Twelve Angry Men” when the racist finally lets it all out.

I wrote months ago that Republicans should have told Trump he wasn’t a Republican and thus wasn’t welcome in the debates, the nomination race or the party. They had neither the foresight, principles nor guts to do that, and now they are stuck with him polluting the debates and the race, engaging in the equivalent of belching and farting, as the juveniles supporting him cheer and snicker. Good job, everybody.

2. That was excellent, fair, competent moderation by John Dickerson. You know the debate has been a mess when the moderator is the star.

3. I have really come to resent Ben Carson’s sleepy, arrogant, useless statements and observations, wasting precious time, blathering platitudes, appealing only to those ignorant souls, like him, who really think the most challenging and consequential job on Earth should be handed to a proud amateur. In that respect, he is the most unethical individual on the stage. END_OF_DOCUMENT_TOKEN_TO_BE_REPLACED

1. The run-up to the debate yesterday was embarrassing to the news media, especially CNN—even Fox did not obsess as much about the man who wouldn’t be on stage in Iowa as that shameless network. Not that Fox isn’t shameless: it’s greatest shame, Bill O’Reilly, once again showed himself to be both unethical and insufferable when he had Trump on his show and begged, pleaded, and cajoled the real estate mogul to reverse his decision. “Be the bigger man,” Bill said at one point. What the hell does that mean? Bigger than who? His employers—I don’t watch Fox live any more because they are still his employers—who properly refused to let him bully Megyn Kelly out of a moderator’s chair? Megyn Kelly? No, that can’t be it. Trump is a intellectual, moral and ethical midget with delusions of grandeur: O’Reilly was just feeding his ego. Then we learned, from Trump, that O’Reilly had enticed him on the air by promising not to talk about the debate boycott. O’Reilly admitted that was true, and then blathered facetiously about milkshakes, as if lying to a guest’s face was a big joke. O’Reilly is one of the deplorable people—most of his supporters, famous and not, are also in this category—who are so devoid of principles themselves that they make Donald Trump look admirable by comparison.

2. I wish I could say that Megyn Kelly was impeccable last night, but she wasn’t. She had a big chip on her shoulder, and mentioned Trump in the very first question, with a pre-composed, gaggy phrasing about “the  elephant not in the room”—lame witticisms were the theme of the night. That made the first question about her, and journalists are ethically obligated not to inject themselves into the story. No moderator should have mentioned Trump, but Kelly particularly. For the rest of the night she was aggressively adversarial, acting as if she was an undercover moderator from CNBC.

3. If there were any lingering doubts about what an arrogant jerk Ted Cruz is, his performance last night ought to have obliterated them. He reminds me of nothing so much as than the cocky high school nerd who thinks that because he’s elected class President, people really like him, but in truth he is socially hopeless. As a stage director and occasional humor writer, I cannot imagine a more pathetic attempt at a joke than his “I’m a maniac. Everyone on this stage is stupid, fat, and ugly. And Ben Carson, you’re a terrible surgeon. Now that we’ve gotten the Donald Trump part out of the way (rim shot!) . . .” bit. His timing was terrible, and because the thing went on long after everyone knew what the punchline would be, nobody but a shill or an idiot would laugh at it. Cruz got even worse, talking past his limit, whining about the moderators siccing everyone else on him (though they were), trying to change the rules, and sounding like Bill Clinton as he tried to explain away what were his obvious flip-flops on immigration.

I noticed that as the camera panned the debaters dispersing after the debate, nobody spoke to Cruz or even looked at him, while the others were smiling and being collegial to one another. No wonder. END_OF_DOCUMENT_TOKEN_TO_BE_REPLACED