Oh, yeah…this is JUST what we need…

Is Senator Jeff Sessions, now definitely Donald Trump’s choice to be his Attorney General, a bigot? I have no idea, but it doesn’t matter. Nor does it matter that the blaring “Trump is a racist” narrative relentlessly repeated by the left is unsubstantiated and based on innuendo and distortion.

Racial tensions in our nation are unacceptably high, and not even primarily because of the election. It is irresponsible for Trump, at this crucial juncture, to do anything at all that will add to those tensions, or exacerbate African-American fears, however unjustified, that he will not be a President of all citizens, regardless of creed or color. His nomination of Senator Sessions does exactly that, and he must know it.

In 1986, a much younger Sessions was nominated by President Reagan for a federal judgeship. At sensational Congressional hearings, Justice Department prosecutor J. Gerald Hebert testified that in  1981, he had met with Sessions, then the United States attorney in Mobile, Alabama. Hebert told Sessions that a federal judge had called a prominent white lawyer “a disgrace to his race” for representing black clients.

Hebert also testified that  Sessions had referred to the American Civil Liberties Union and the NAACP as “un-American” for “trying to force civil rights down the throats of people.” Then an African-American prosecutor testified that  Sessions had referred to him as “boy” and  that he had joked that he thought that the Ku Klux Klan “was O.K. until I found out they smoked pot.” END_OF_DOCUMENT_TOKEN_TO_BE_REPLACED

Newspaper advice column maven Amy Dickinson encountered one of those juicy letters that boosts readership but that should also set off ethics alarms. Her responsible, ethical course was to leave the situation alone. Unfortunately, she took the bait. How unfortunate, we will never know.

“Conflicted” (I have some better names for her ) wrote to “Ask Amy” because, she said, her conscience was bothering her, and no wonder. She had divorced her husband of five years two years ago. “We loved each other, but our marriage was deeply troubled,” she wrote, which is an understatement. He lied to her. He had “inappropriate relationships with other women.” He was profligate with money, and spent the couple into financial trouble. Worst of all, this: “…during a two-year period of our marriage and on five occasions, he was physically abusive. Not a slap or a shove, but full-out rage. I thought he would kill me.”

Naturally, she is still sleeping with him! “We see each other frequently and have a lively sexual relationship,” she says cheerily. The Ex assumed her old hubby had a social life outside of hooking up with his former wife/punching bag, and was fine with that, since the swinging Ex is also sleeping around: Hey, it’s the 21st Century! But now she has learned that he is in a serious relationship with another woman who does not know he never stopped making whoopee with “Conflicted.” They are talking about marriage and babies.

So now, she tells Amy, she is certain he will ruin this “lovely girl’s” life. She thinks she has an obligation to the innocent young thing to tell her about his spending problems and some other more recent details ( “he owes thousands of dollars on credits cards and has not filed his taxes in two years”) and, she says confidently, he “clearly” hasn’t told her about his spouse-bashing episodes, though  “Conflicted”  hasn’t asked him, and hasn’t talked to her. “What obligation do I have to share any of this information with her? I don’t know what to do,” she asks, plaintively.

Amy: This is the Amityville House talking to you now. 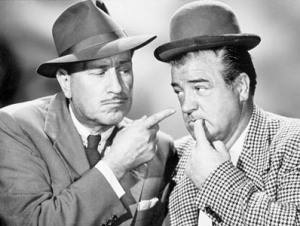 Today George Stephanopoulos began “This Week with George Stephanopoulos,” his Sunday ABC current events show, with 15 minutes of a pointless, irrelevant, unfunny interview with Comedy Central’s Stephen Colbert, who, in the proud tradition of Pat Paulsen, is again running a fake presidential campaign.Such stunts have always been about cheap publicity, ratings and entertainment, and have as much pertinence to public affairs and national politics as Taylor Swift’s recipe for chili. For ABC News to devote a full 25% of its weekly overview to this nonsense is disrespectful to viewers, who do not tune in to George, Paul Krugman, Peggy Noonan and the rest for yuks. I know how to find Colbert, who is a talented satirist and an engaging performer, when I’m in the mood for him. For Stephanopoulos to waste my time with his failed audition as the next Bud Abbott—his attempt to riff with Colbert was painful to watch, and essentially killed the comic’s act—was  a breach of journalistic integrity and responsibility, not to mention comedy malpractice.Does the New York Times, just for the heck of it and for funsies, spontaneously devote a quarter of its front page to knock-knock jokes, because it’s their paper, and what the hell? No, because it has a job to do, and people depend on the Times to do it. END_OF_DOCUMENT_TOKEN_TO_BE_REPLACED

One of the many themes running through the many teeth-gnashing, garment-rending attempts by angry progressive columnist and bloggers to explain why the Democrats got their heads handed to them on Tuesday is that the voters are just stupid, that’s all. (In doing so, they duplicate the exact same arrogance that helped put all those heads on the block in the first place, but I digress.) The public is not stupid, of course, but it is often wretchedly misinformed by a news media that has lost most of its scruples and a lot of its professionalism. Once a rumor, misconception, distortion or myth gets enough publicity, it can lodge itself in people’s brains like shrapnel. Examples: Obama’s “Muslim faith” and his “foreign birth.” Other examples: the “50% divorce rate” and women only  getting paid “75% of what men are paid for the same jobs.”

We should all thank Matt Drudge for giving us a wonderful lesson on how this happens, both for our future reference and protection. He recently linked to a story in an Indian newspaper that reported, based on anonymous sources, that President Obama’s trip to Mumbai was going to be accompanied by about 10% of the U.S. fleet and cost $200,000,000 a day. END_OF_DOCUMENT_TOKEN_TO_BE_REPLACED

It looked grim for a while yesterday, when the media was reporting that the sailboat carryingAbby Sunderland, the 16-year old seeking to become the youngest person to circumnavigate the globe solo by sea, had been lost. Now it looks like she may be safe after all, as a rescue of her crippled craft is underway in the Indian Ocean.  That a tragedy may have been averted, however, doesn’t mitigate that unethical abdication of responsible parenting and trust by Abby’s parents that set the stage for a calamity.

Had the ill-conceived adventure ended fatally, it is certain that we would have heard her heart-broken parents eulogize their daughter as intrepid,  courageous and mature beyond her appearance, who lived a full life in her sixteen years, and perished “living her dream.”  All true, but those aren’t the facts that matter.  What matters is that she is a dependent, trusting, sixteen-year old child who desperately needed her older and supposedly wiser parents to say “No. Being the youngest woman to sail around the world is good, living long enough to go to college, have a family, have a career and experience the joys of life over many decades is better. Sorry. It’s too dangerous. When you understand a little bit more about life, you may be capable of deciding when to risk it.”

They failed her, and the fact that she isn’t dead as a result is only luck. END_OF_DOCUMENT_TOKEN_TO_BE_REPLACED