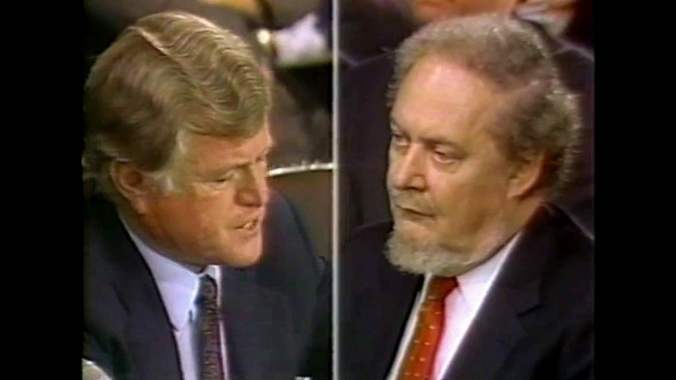 “Robert Bork’s America is a land in which women would be forced into back-alley abortions, blacks would sit at segregated lunch counters, rogue police could break down citizens’ doors in midnight raids, schoolchildren could not be taught about evolution, writers and artists would be censored at the whim of government, and the doors of the federal courts would be shut on the fingers of millions of citizens for whom the judiciary is often the only protector of the individual rights that are the heart of our democracy.

America is a better and freer nation than Robert Bork thinks. Yet in the current delicate balance of the Supreme Court, his rigid ideology will tip the scales of justice against the kind of country America is and ought to be.

The damage that President Reagan will do through this nomination, if it is not rejected by the Senate, could live on far beyond the end of his presidential term. President Reagan is still our President. But he should not be able to reach out from the muck of Irangate, reach into the muck of Watergate, and impose his reactionary vision of the Constitution on the Supreme Court and on the next generation of Americans. No justice would be better than this injustice.”

—From Senator Ted Kennedy’s speech on the Senate Floor on July 1, 1987, in response to President Reagan’s nomination of Robert Bork to the Supreme Court

Kennedy’s outrageously unfair, vicious, and hyperbolic attack on Robert Bork, then one of the most respected jurists in the country, “worked,” in the sense that it catalyzed an unprecedented assault on a Presidential nominee who was not merely qualified but spectacularly qualified for a seat on the Court, shattering all previous norms and traditions regarding the confirmation of Justices by the Senate. It would not be inaccurate to mark Kennedy’s speech as the beginning of demonization as a standard tactic in mainstream politics, in which the mere fact of being liberal or conservative justifies the characterization of an individual or a group sinister or evil. (See: Southern Poverty Law Center) In hindsight, Kennedy’s rhetorical excess was eventually acknowledged on all sides of the political spectrum to be a false characterization of Bork as a judge and as a human being, though Kennedy, as far as I know, never apologized for it….but then he never apologized for a lot of things. END_OF_DOCUMENT_TOKEN_TO_BE_REPLACED

It would be extremely beneficial for the culture and enlightened civic discourse if there were a trustworthy, reliably objective observer with integrity and intelligence to provide fair, forceful pronouncements on the political controversies of the day. Such an observer would have to be seen as free of partisan and ideological bias, or at least show signs of actively trying to counter their effects. This, of course, is the idealized concept of what competent and ethical journalism is supposed to provide, and to the extent that any journalism organization was deemed capable of providing it, the New York Times was it.

Yesterday, the Times editors published an editorial called “The Stolen Supreme Court Seat” that was so partisan in tone and inflammatory, not to mention ridiculous, in content that it could only be taken as a biased political screed. Worse than that for the long term, however, is that the piece decisively disqualifies the Times as an arbiter of complex national issues whose judgment can ever be trusted as genuine and persuasive.  Many will argue that the Times’ biases have been blatant and unrestrained for many years, and this is true. That New York Times editorial may not be the first smoking gun, but it is the smokiest yet.

Do recall that Ethics Alarms substantially agreed with the Times in its main point that the Republican Senate’s refusal to hold hearings and consider President Obama’s nomination of federal judge Merrick Garland to fill the Supreme Court seat vacated last year with the sudden death of Justice Scalia was unethical:

“For Senate Republicans, holding hearings on President Obama’s qualified and moderate nomination for the Supreme Court is both the ethical course and the politically smart course. It is also in the best interests of the nation. In fact, the Byzantine political maneuverings by the President and the Republican leadership, by turns petty and ingenious, have handed Republicans a political chess victory, if only they are smart enough, responsible enough, and patriotic enough to grab it. Naturally, they aren’t.”

Note: unethical, but not illegal or unconstitutional. By using the inflammatory term “stolen” implying legal wrong doing, the Times intentionally adopted the language of political hacker, and Democratic Party talking points. Strike One: You cannot be trusted as objective and non-partisan when you intentionally endorse partisan rhetoric: END_OF_DOCUMENT_TOKEN_TO_BE_REPLACED

Blame the first domino, not the last one..

I generally revile Senate Majority Leader Harry Reid for his hyper-partisan leadership of the Senate, his unethical statements and his manner of conducting himself.  Still, I am bound to take this rare opportunity to defend Sen. Reid, who is taking the brunt of  criticism from both Democrats and Republicans for weakening the filibuster last week. True: he didn’t have to take this course, and I think it will probably, as the talking head shows Sunday seemed to agree, make the toxic and dysfunctional politics in Washington worse, not better. Reid, however, is not the primary one at fault. He was doing his job as he saw it, dealing with circumstances that are now beyond his control.

What led to the so-called “nuclear option” becoming reality was an unplanned convergence of Machiavellian politics, breaches of professional duty, dishonesty, irresponsible legislating, lack of statesmanship, unfairness, disrespect, bad luck, incompetent leadership, and most of all, a cycle of revenge that is now only likely to continue. Most of this was out of Harry Reid’s hands.

History shows that U.S. Presidents were once virtually always given the benefit of the doubt regarding judicial appointments to the federal courts, except in the rare cases of serious ethical questions or dubious qualifications. It was a good system, and the right system, and both parties followed it, realizing that the ideological mix in the courts was fluid and cyclical, and that today’s new conservative judge would eventually be offset by the appointee of the next liberal President, and vice versa. Democrats destroyed that tradition and accord on judicial appointments when in 1987, the Senate Democrats blocked President Reagan’s nomination of Robert Bork, who had been selected by President Reagan to fill a vacancy on the U.S. Supreme Court. END_OF_DOCUMENT_TOKEN_TO_BE_REPLACED

There is not one chance in a thousand that they will do it, of course. But Senate Republicans can do much good for the country, the political culture, and, in the long term, themselves, if they would undertake a courageous, principled and ethical act: confirming Elena Kagan to the Supreme Court, after establishing her qualifications to serve, by an overwhelming if not unanimous vote. END_OF_DOCUMENT_TOKEN_TO_BE_REPLACED

The long knives are already out for Solicitor General Elena Kagan, now the latest Supreme Court nominee. Once, before the late Ted Kennedy shamelessly accused Robert Bork of being a racist, a sexist and a monster to boot, U.S. Presidents were accorded the respect by both parties in the Senate have confirmed whoever they chose for the High Court, unless the choice was so cynical or politically tainted as to demand defeat. No more. Now each nominee has to thoroughly debase herself or himself by denying the political philosophies that produced his or her nomination in the first place. The first casualty of the nomination process is integrity.