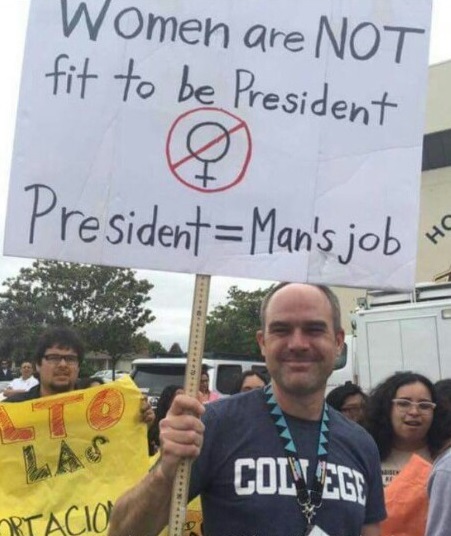 The sign, naturally, was photographed and quickly went viral on social media, where I encountered it. All of the respondents to the sign’s posting on social media pronounced Sullivan a vile, sexist fool who was unqualified to teach. There is a “fire Sullivan” hashtag on Twitter. I immediately guessed that the sign was probably intended as satire: it was just too stupid. Sure enough, satire is what Sullivan, with the social media screaming for his metaphorical head and to end his teaching career, claims the sign was. It was a joke! Don’t you get it?

“Disgusted by the statement on my sign? Good! I’m happy to hear you disagree with such outlandish statements.Unfortunately, I have several family and friends who express the point made on my sign (mostly behind closed doors), I wanted to bring their message into the public forum to show how ridiculously outdated it sounds in 2016. Glad to hear it bothered so many—opinions like that should.”

Of course, if Sullivan meant every word of the sign, he could still say the same thing, and if his job was on the line, he probably would. Sullivan reportedly wrote his thesis on the gender gap in high school mathematics classrooms to help teachers create a more equitable environment for students. Does that prove his sign was a joke?

Did he hand out his thesis at Hillary’s speech?

Your nearly impossible Ethics Alarms Ethics Quiz of the Day is…

What should the school do with this guy?