Ethics train wreck scholars take note: when an organization’s image and existence is based on multiple lies, an ETW is inevitable. 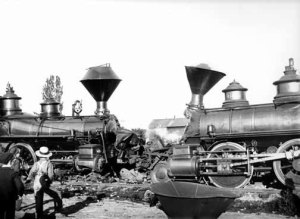 Oh NO! It's another Ethics Train Wreck!

National Public Radio is now in the middle of a massive, six-months long ethics train wreck that began with the hypocritical firing of Juan Williams on a trumped-up ethics violation. The disaster exposes the culture of dishonesty and entitlement at the heart of NPR, and by extension, the Corporation for Public Broadcasting. To the extent that their supporters blame anyone else, it is evidence of denial. This is a train wreck, however, and the ethics violators drawn into the wreckage are many: END_OF_DOCUMENT_TOKEN_TO_BE_REPLACED

The seeming inability of elected officials and politicians to deal with basic decisions involving responsibility, prudence, accountability and honesty is coming into sharp focus as yet another debate over taxpayer-funded public broadcasting on PBS and NPR gets underway.

Colorado Congressman Doug Lamborn has introduced legislation that would cut all federal funding, an estimated annual $420 million, for public radio and television as part of the necessary effort to close the nation’s more than $13 trillion debt. As one of thousands of measures that will have to be taken to stave of fiscal catastrophe in the future, the move is truly a no-brainer, an example of the standard budget-balancing strategy of eliminating the most non-essential expenses, no matter how nice it may have been to have them when resources were more plentiful. In a rational, ethical environment where politicians didn’t regard their interest group contributors as more important than the welfare of the nation as a whole, Lamborn’s proposal wouldn’t be considered controversial. The rational response from all would be, “Well, of course! That’s $420 million that can be better used.”