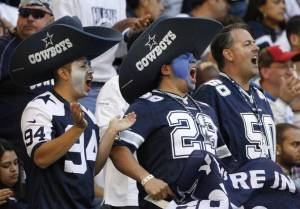 In response to a question in a newly released CNN poll, a majority of football fans responded that the fact that the NFL intentionally withheld from its players evidence that repeated  concussions were inevitable despite the supposed protection provided by equipment, and that this would lead in many cases to devastating premature cognitive damage to players which would leave them disabled, depressed, violent, demented and/or suicidal until their early deaths didn’t trouble them at all, as long as they got their weekly Sunday football fix.

All right, that’s unfair. The results actually just showed that only 36% of respondents think that the NFL’s handling of the concussion issue has caused them to view the pro football league less favorably. No, on second thought, it’s not unfair at all.

I’m sure the NFL honchos who are determined to keep their billion dollar profit machine purring away, powered by the game’s consumption of the minds and bodies of young men lured by a short-term bonanza of fame and bucks, are whooping it up in their park Avenue suites. Yup, they did it! They have successfully converted much of America into crass, blood-thirsty sadists who are only different in degree from the Romans who cheered on Nero’s various bloodsports. END_OF_DOCUMENT_TOKEN_TO_BE_REPLACED