1. Priorities! Major League Baseball has placed Angels pitching coach Mickey Callaway on its ineligible list through at least the 2022 season, MLB commissioner Rob Manfred announced. The league made the decision after investigating Callaway for sexual sexual harassment allegations reaching back several years, with several female sporstwriters among the alelged victims. The Angels fired Callaway this afternoon. Opines a major baseball news site: “Callaway is facing a year-plus ban, and it seems hard to believe any MLB team will hire him when he’s eligible to return.”

Alex Cora was suspended and fired as manager by the Boston Red Sox after a one-year suspension, then immediately hired back by the team. All he did was play a major role in devising a cheating scheme for one team, the Houston Astros, that extended through the play-offs and World Series, then oversaw a second team, Boston, that was found to have engaged in cheating, though less extensively, the next season. Cora’s cheating scheme with Astros was unprecedented, and cost two other professionals their jobs and the Astros millions in fines,while seriously scarring the integrity of the game. The conduct Callaway engaged in has been routine among professional athletes for decades, though in his case it was apparently 1) a bit more extreme than the norm and 2) “unwelcome.” After all, he was just a coach. So far, nobody has accused a player making more than $10 million a year of making sexual advances that were “unwelcome.’

END_OF_DOCUMENT_TOKEN_TO_BE_REPLACED

Finally! Back on schedule! I was beginning to have trouble coming up with new names for non-warm-ups that got posted in the afternoon or later…

1. President Joe Biden fell a couple times boarding Air Force One. The video has led many wags to ask if this would prompt Saturday Night Live to give him the Gerald Ford treatment. Those of a certain age recall the running gag in the immortal first season of the now creaky weekend satire show, where then-President Ford was portrayed as a slapstick klutz on nearly every episode.

Of course it won’t, for several reasons, some ethical, some not. SNL is now almost exclusively a partisan vehicle for humor-based propaganda, and after 8 years of seldom daring to target President Obama and four of mocking President Trump, repetitiously and badly, a return to past standards of equal opportunity mockery is unlikely. Biden is a Democrat. Also, in the case of Ford, the gag was just a gag: Ford was a fit former athlete who just had a couple of well-publicized stumbles. Representing him as a clumsy boob was only silly. Biden, in contrast, has been falling apart mentally and physically before our eyes, and is 78 years old. In his case, such ridicule would not just seem cruel, it would be cruel. Biden’s decline is also scary, as the awful Kamala Harris sits cackling in the wings. There is nothing funny about the whole situation.

2. Speaking of the least democratically-chosen President-in-waiting since Gerald Ford, Harris, in one of her many idiotic statements while trying (and failing) to get nominated for President on her merits, admitted to past illegal marijuana use and advocated it, saying, “I have [smoked marijuana]. And I inhaled. I did inhale. I think it gives a lot of people joy. And we need more joy in the world.” Heroin and child rape also give quite a few people joy, but never mind: Harris had the right skin-tone and chromosomes, and that’s all that matters, apparently. In light of her confession, this story is incomprehensible:

END_OF_DOCUMENT_TOKEN_TO_BE_REPLACED 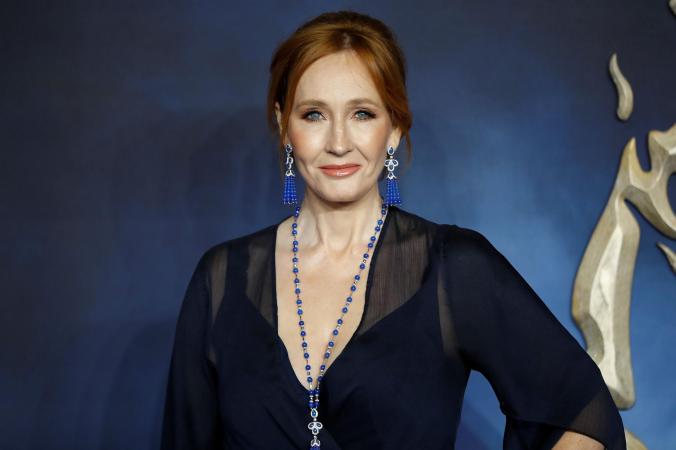 The issue is not Rowling’s controversial opinions regarding transgender individuals. For the record, they are not exactly congruent with my own, which is that once an individual has transitioned physically to another gender, we should respect that new identity. I do not believe, and will never believe, that individuals can change their gender by just saying so, or that the government should make laws that enforce that fiction. No matter what “The Crying Game” told us, people with male sex organs (I am not talking about anomalous intersex individuals whose physical sexuality is ambiguous) have to be officially male for public policy purposes.

None of which is relevant to why J.K Rowling is an Ethics Hero. Rowling, who is more active on social media than is wise, used Twitter to question  an article’s use of the phrase “people who menstruate” instead of saying “women.” “If sex isn’t real, there’s no same-sex attraction. If sex isn’t real, the lived reality of women globally is erased,” she wrote. Predictably, trans activists and much of the “woke” establishment now want Rowling “cancelled.” The LGBTQ advocacy group GLAAD called her tweets “anti-trans”—this is the gender wars equivalent of calling anyone who criticizes Black Lives Matter “racist”— and wrote: “JK Rowling continues to align herself with an ideology which willfully distorts facts about gender identity and people who are trans. In 2020, there is no excuse for targeting trans people.”

Rowling did not “target” anyone. She disagreed with the use of a clumsy and misleading term for “women.” END_OF_DOCUMENT_TOKEN_TO_BE_REPLACED

I’m not a big Sinatra fan, but I’ve always thought it a shame that the two Christmas songs he “owns” are both mediocre: “The Christmas Waltz” and “Mistletoe and Holly (which he co-wrote.) Frank sang the whole canon, of course, and well, but still, Judy Garland owns “Have Yourself A Merry Little Christmas,” Nat King Cole owns “The Christmas Song” (even though Mel Torme wrote it), Bing has “White Christmas” (and others,), Gene Autry has “Rudolph…” and “Here Comes Santa Claus” even after Bruce Springstein stole “Santa Claus Is Coming To Town” away from him, but Ol’ Blue Eyes is second or third best to lesser singers on the really great songs, leaving him with those two wan ditties to call his own. It’s unfair.

1. The social media mobs are after J.K Rowling. Her offense? British Researcher Maya Forstater was fired last year by a London think tank for her “gender critical” views, including the position that “it is impossible to change sex.” Forstater filed a lawsuit earlier this year alleging discrimination, but an employment tribunal in London ruled against her this week, holding that her views were “not a philosophical belief protected” by British law but were instead “incompatible with human dignity and fundamental rights of others. It is also a slight of hand to suggest that the claimant merely does not hold the belief that trans women are women. She positively believes that they are men and will say so whenever she wishes.” The court  added that Forsater held beliefs that are “not worthy of respect in a democratic society.”

No, they don’t believe in freedom of speech or thought in the UK. Remind people of this when they make one of those fatuous “the U.S. is the only developed country in the world that doesn’t do X” arguments. We are special.

Harry Potter’s mom criticized that ruling and said she supported  Forstater: “Dress however you please,”  Rowling  tweeted  to her more than 14 million followers (this makes me want to hurl myself into a shredder, as I desperately try to recover the lost Ethic Alarms followers since 2016). “Call yourself whatever you like. Sleep with any consenting adult who’ll have you. Live your best life in peace and security. But force women out of their jobs for stating that sex is real? #IStandWithMaya.”

Oh, sex, gender, whatever. I know that to trans individuals the distinctions are a matter of honor, identity and self-esteem, and as far as I’m concerned, if an XY individual has changed everything but her chromosomes and wants to be regarded as, treated as and referred to as a woman, I will accommodate her in the interests of comity, kindness, and the Golden Rule. However, if someone as a matter of linguistic or biological rigor (or pedantry) wants to insist that such an individual is still technically female, that’s a legitimate, if unpopular, position.  This is a dispute about manners and definitions, not facts.

The researcher should not have been fired, and Rowling’s tweet was not “transphobic.” END_OF_DOCUMENT_TOKEN_TO_BE_REPLACED

I learn something every time the transgender ethics issues raise their contentious heads, and usually it’s because of the comments by Zoe Brain, who has forgotten more about these matters than I will ever know.Here she was responding to another commenter, and, typically, pointing out that this area is much, much more complicated than the superficials public debates about it reveal.

“There are over 6,000 genetic differences, affecting everything from the skin to the brain…There is no possible drug cocktail, therapy, or surgery that can change one’s gender.”

The evidence strongly suggests that’s correct. Once set in the womb by neural development in the third trimester, the resultant development paths are tightly constrained, regardless of post natal hormonal environment. Of course, as physiological characteristics such as genitalia are formed earlier, gender and sex may be discordant.

“There are over 6,000 genetic differences, affecting everything from the skin to the brain.”

A matter of opinion. Womb transplants have proven to be very successful for some Intersex women. It’s only a matter of time before they’re made available to Trans women with similar physiology. And in order to justify that “cosmetic” opinion, you’d have to justify why you’re picking one set of physiological characteristics – say height – over another, say bust size. Or vice versa.

I think you’re right in your opinion, but I have no idea how I’d go about justifying that, and could easily be persuaded to change my mind.

It’s anything but simple. Sorry.

Responding sharply to a commenter’s expressed criticism of the argument that convicted classified data leaker Bradley, now Chelsea, Manning, sentenced to Federal prison and seeking treatment as a trans-gendered female, ought to have his treatment needs served by prison authorities at public cost, Ethics Alarms’ own expert on such matters (from Australia), provided this fascinating overview of U.S. law and medical ethics on the topic. Here is zoebrain’s Comment of the Day on the recent post flagging Fox News’ juvenile mockery of Manning’s gender issues, Ethics Dunce: Fox News:

“There are two disputes here. The first is whether prisoners have a right to medical treatment, and if so, to what degree.I’ll deal with that first.

“Brown v. Plata 131 S.Ct. 1910 (2011):  “To incarcerate, society takes from prisoners the means to provide for their own needs. Prisoners are dependent on the State for food, clothing, and necessary medical care. A prison’s failure to provide sustenance for inmates “may actually produce physical ‘torture or a lingering death.’ ” ….Just as a prisoner may starve if not fed, he or she may suffer or die if not provided adequate medical care. A prison that deprives prisoners of basic sustenance, including adequate medical care, is incompatible with the concept of human dignity and has no place in civilized society.” END_OF_DOCUMENT_TOKEN_TO_BE_REPLACED