Attorney Larry Klayman was familiar presence during the Clinton administration.  The founder of Freedom Watch and Judicial Watch and conservative gadfly  helped bring dozens of cases against Bill Clinton, the White House, and various staff members and agencies, uncovered some damning documents in FOIA requests, filed government ethics complaints, and continued to champion conservative causes after he left Judicial Watch in other hands. He  represented  former Arizona Sheriff Joe Arpaio and  state’s rights activist rancher Cliven Bundy, among other clients. Now the District of Columbia Court of Appeals Board on Professional Responsibility Ad Hoc Hearing Committee has handed down a 183-page report finding that Klayman breached the D.C. professional ethics rules, recommending that he be suspended from the practice of law for 33 months, and have  he prove his rehabilitation and fitness to gain reinstatement.

According to the report, Klayman represented Elham Sataki, whom he helped file a 2010 sexual harassment suit against her employer, Voice of America.  Klayman persuaded Sataki to move to Los Angeles and offered to pay her housing and living expenses, telling Sataki she could later reimburse him. She took him up on the offer, but when  Sataki rejected Klayman’s overtures for a romantic relationship,  the findings state, the lawyer raised his fee demands to continue representing her sexual harassment claim. As a result, the report concludes, Sataki did not pursue her case. END_OF_DOCUMENT_TOKEN_TO_BE_REPLACED

“Psst…remember not to smirk when you lie…”

Paula Jones is speaking out again after almost 16 years. Good.

I can’t say she is an ethics  hero, for she has vengeance on her mind, and maybe even some desire to cash in…or who knows? Maybe she can get a stipend from the Clinton Foundation to keep quiet. Nonetheless, her reemergence is a good thing.  Too many have forgotten, or indeed never learned, about how she was sexually harassed by Bill Clinton when he was a governor and she worked for Arkansas, and systematically vilified and denigrated by Hillary, the Clinton team, and soulless Clinton enablers in the media before her lawsuit exposed the Monica Mess. I had even forgotten how outrageously she was treated, and I had followed the cases carefully.

I had not forgotten, however, the disgusting Democratic and feminist hypocrisy where she was concerned. Back in 1997, I remember confronting a prominent female trial lawyer, outspoken feminist, and then president of The Association of Trial Lawyers (before they changed their name to the stealth “American Association for Justice” to hide the fact that they were lawyers) whom I overheard trashing Jones as a lying, politically-motivated gold-digger. Recalling that during the Clarence Thomas hearings she had sported an “I believe Anita Hill” button, I asked her, in a room full of people, “Why don’t you believe Paula Jones, if you believed Anita Hill?” She just walked out of the room. She believed Anita Hill, whose accusation of  ClarenceThomas was entirely politically motivated and unprovable, because she wanted to. She didn’t believe Paula Jones, who had a much stronger case, because Jones was a big-haired, working-class woman who dared to try to hold accountable a powerful, liberal, serial sexual predator that her association had contributed millions to elect. She was ashamed of the answer to my question. She should have been.

Here’s Paula on the “most admired living President” and the presumptive standard bearer for the Democratic Party in 2016, who will be running on a pro-women platform and accusing Republicans of waging a “war on women”:

‘There is no way that she did not know what was going on, that women were being abused and accosted by her husband. They have both lied…She should not be running with the terrible history they have.  Who would want Bill Clinton back a second time, doing the same stuff he was doing before, philandering with women?…He does not have a right to be in the White House to serve the people the way he treated women, sexually harassing women. There were many women that came out and spoke out about what he did to them. He does not have a place in the White House to serve the American people.”

Have you forgotten? Here was the key section of Jones’s deposition that the Clinton team, guided by Hillary, claimed was all fabricated: END_OF_DOCUMENT_TOKEN_TO_BE_REPLACED 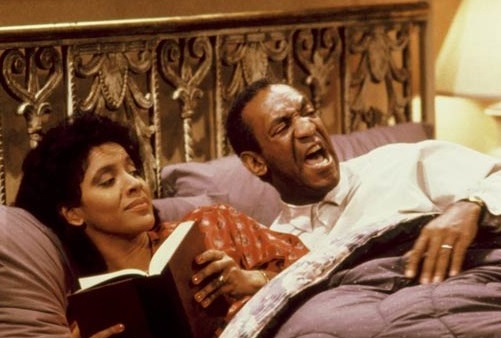 Phylicia Rashad, the African American actress best known for playing “Claire Huxtable,” Bill Cosby’s wife on his legendary sitcom, was resolute about not be dragged into the crisis facing her on-screen hubby, as woman after women has come out with allegations that she was raped, sexually assaulted or drugged by funny, ol’ Bill. She should have stayed that way. Unfortunately, she allowed a Hollywood celebrity reporter to pull some quotes out of her, and now she has a crisis of her own. Now we know she values loyalty, group identification, show business protocol and her own financial interests over decency, fairness, honesty, justice, compassion, respect for women, and truth.

Rashad’s take on Cosby’s problems was also odd, as it focused very little on the man being accused of such heinous acts. She didn’t say, or at least such remarks weren’t reported, that he was a wonderful human being, or that she could not imagine the man she worked so closely with all these years doing what so many alleged victims claim. She said that she “loves” him. In show business, this is like the host of a TV talk show saying a guest is a close personal friend: it is routine, and means nothing.  Rashad’s defense of Cosby consisted of dismissing his victims’ stories as baseless, and this:

“What you’re seeing is the destruction of a legacy. And I think it’s orchestrated. I don’t know why or who’s doing it, but it’s the legacy. And it’s a legacy that is so important to the culture….Someone is determined to keep Bill Cosby off TV. And it’s worked. All his contracts have been cancelled…This show represented America to the outside world. This was the American family. And now you’re seeing it being destroyed. Why?”

Why. Huh. That’s a head scratcher isn’t it? Yes, why would the entertainment value of family situation comedy about a wise, loving father , the wife whom he adores and his brood of adorable, normal, kids, including three, and ultimately four, teenage girls be diminished in the least by overwhelming evidence that the actor playing said father is a sick, ruthless, sexual predator and the King of Hypocrites? END_OF_DOCUMENT_TOKEN_TO_BE_REPLACED

In a favorite episode of “The Simpsons,” the Springfield equivilent of Mensa is having a contentious debate. Prof. Frink, the local mad scientis, complains that the tone has set the readings of his newly-invented “sarcasm detector” dangerously high. “Comic Book Guy,” another brainy member of the club, snarks, “A sarcasm detector? That’s a real useful invention!” Whereupon the sarcasm detector blows up.

Well, my hypocrisy detector just blew up. The readings started going off the charts when I came across this item:

NEW YORK (AP) — Hillary Rodham Clinton said Thursday night that excessive partisanship flowing through the nation’s political system is causing the U.S. to march “backwards instead of forward”…Clinton cited the need to “get back to evidence-based decision-making.”

Oh, you mean like telling America that the allegations that your husband had lied under oath about his sexual affairs in a sexual harassment lawsuit and was using the power of his office to obstruct justice and cover it up was the creation of “a vast right wing conspiracy,” Hillary?  When you knew that the allegations were true? That kind of “evidence-based decision-making”?

I swear, if this awful, dishonest, cynical and untrustworthy woman runs for President, everything here will be exploding—my sarcasm detector, lie detector, hypocrisy detector, head…you name it.

This was just a warm-up, though. Then I read a Washington Post puff piece on Anita Hill, who is peddling a new documentary that casts her as a hero, which is ridiculous on its face. Anita Hill is the walking, talking embodiment of feminist hypocrisy, especially when paired with Hillary’s target, Paula Jones. I remember back when I worked for a large trial attorney lobby and Monicagate was in full force. The female president of the association was going on about her support of Clinton and how this was all, well, Hillary provided the talking point, and I had the cheek to remind her that during Clarence Thomas’s confirmation hearings she wore a button that said “I believe Anita Hill.”

END_OF_DOCUMENT_TOKEN_TO_BE_REPLACED

This won’t make some people happy, but it is true.

I always feel like Michael Corleone at times like these: just when I think I am finally through with having to point out the miserable ethics record of Bill Clinton, he (or his shameless supporters) puuuull me back …

“Bill and Hillary Clinton are angry with efforts by mayoral hopeful Anthony Weiner and his campaign to compare his Internet sexcapades — and his wife Huma Abedin’s incredible forgiveness — to the Clintons’ notorious White House saga…’The Clintons are upset with the comparisons that the Weiners seem to be encouraging — that Huma is ‘standing by her man’ the way Hillary did with Bill, which is not what she in fact did,’ said a top state Democrat…’The Clintons are pissed off that Weiner’s campaign is saying that Huma is just like Hillary,’’ said the source. “How dare they compare Huma with Hillary? Hillary was the first lady. Hillary was a senator. She was secretary of state.'”

My reaction to this?

[TV is full of reruns these days, and sometimes I am grateful for them, for it gives me a chance to see episodes of favorite shows I had missed for some reason or another. Back in early March, I posted the following essay about the origins of America’s current crisis of trust in our government, and how it might be cured by our elected leaders. Since then, the crisis has deepened, and as I was doing some routine site maintenance, I reread the post. It is still very timely (unfortunately), and since far fewer people were visiting Ethics Alarms in March, I decided to re-post it today, with just a few minor edits. I promise not to make this a habit. Still, trust is the reason why ethics is so important in America: if there is a single post of the more than 700 I have written here since October 2009  that I would like people to read, this is it.] END_OF_DOCUMENT_TOKEN_TO_BE_REPLACED

Both the Pentagon shooter and the Texas I.R.S. attacker were motivated by a virulent distrust of the U.S. government, the distrust mutating into desperation and violence with the assistance of personal problems and emotional instability. We would be foolish, however, to dismiss the two as mere “wingnuts,” the current term of choice to describe political extremists who have gone around the bend. They are a vivid warning of America’s future, for the media, partisan commentators, the two political parties and our elected officials are doing their worst to convert all of us into wingnuts, and the results could be even more disastrous than the fanciful horrors the Left and the Right tell us that the other has planned for us. END_OF_DOCUMENT_TOKEN_TO_BE_REPLACED

In an interview in the current Vogue, Hillary Clinton explains how she became Secretary of State: END_OF_DOCUMENT_TOKEN_TO_BE_REPLACED