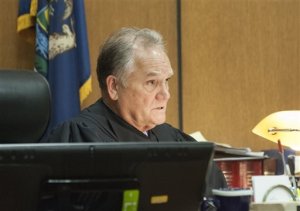 “I understand, son. We’ve all been at that awkward, “just want to beat the old white guy to death” age….”

Detroit Third Judicial Circuit Judge James Callahan sentenced 19-year-old gang member Latrez Cummings to six months in jail for his participation in the mob beating of Steve Utash, a 54-year-old white man who jumped out of his car to assist a 10-year-old African-American boy after his pick-up truck hit the child. Cummings and at least 20 others on the scene attacked Utash and beat him severely, leaving him with permanent brain damage.

Then, after this relaxing break, he returned to his supervisor position in Wayne County…

It appears that no-tolerance policies in the schools may not be alienating students after all. Some of them, at least in Michigan, are learning the no-tolerance way and applying it in the workplace.

Not John Chevilott, though: he just doesn’t get it, probably because when he went to school, they didn’t have no-tolerance policies. A veteran public-works employee in Wayne County, Michigan, he was mowing grass in Detroit’s Brightmoor neighborhood when he found a loaded revolver. He called the police and waited for them to  pick up the gun, but they didn’t appear. Chevilott finished the job and took the weapon to the police after work. The gun had been stolen in 2005, records showed, and police told him that he had handled the situation well.

Wayne County, however, has a no-tolerance policy forbidding employees from possessing  weapons on work property. After all, there’s no reason for a worker to have a gun, except in the extraordinary situation where one is just hanging around, loaded, and the worker picks it up. But how often would that happen? It’s no wonder nothing about that situation was written into the rule, and rules, as they say in the schools—the schools where kids chew their pizzas into the shape of pistols and get suspended, the schools where kids disarm fellow students of knives and are expelled, and the schools where four-year-old boys kiss girls and get arrested for sexual assault—“rules are rules!”

John Chevilott, who had been on the job 23 years and scheduled to retire in two days, was fired for violating the policy, even though his supervisors understood that the gun wasn’t his, that he had turned it into police, that it was loaded, that it was as much a threat to public safety lying in the grass as any weapon brought to work by an employee, and that he had “possessed it” only to get it into the hands of law enforcement officials.  To be fair, they also suspended Chevilott’s foreman, who knew about the incident, for not reporting the infraction. END_OF_DOCUMENT_TOKEN_TO_BE_REPLACED

“What would you do? Cut a great road through the law to get after the Devil?…And when the last law was down, and the Devil turned ’round on you, where would you hide…the laws all being flat? This country is planted thick with laws, from coast to coast, Man’s laws, not God’s! And if you cut them down…do you really think you could stand upright in the winds that would blow then? Yes, I’d give the Devil benefit of law, for my own safety’s sake!”—- Sir Thomas More [Played by Paul Scofield, scripted by Robert Bolt (in a speech adapted from More’s writings) in the film of “A Man for All Seasons” (1966)]

My opinion of Rev. Terry Jones is a matter of record; to summarize, I think he is well beneath Charlie Sheen, Donald Trump, Tom DeLay, Goldman Sachs, Nancy Pelosi, Eliot Spitzer, AIG, Charlie Rangel , Mark Sanford, Barry Bonds, “Ronbo” and most of the other members in bad standing on the Ethics Alarms Bottom 100. Determined as he is to sully the First Amendment with his disgraceful and hate-soaked use of it, however, he is an American, and he has rights. A Dearborn, Michigan jury, prompted by the city, has taken away those rights by preventing him and another fool from protesting outside a local mosque. END_OF_DOCUMENT_TOKEN_TO_BE_REPLACED

We have to permit the stupid demonstrations to protect the important ones.

The latest drama surrounding irresponsible publicity addict, Quran-burner and gonzo Islam-hater Rev. Terry Jones is his attempt to get a permit to demonstrate outside  the Islamic Center of America in Dearborn, Michigan because, well, because it’s there, I guess.  Wayne County and Dearborn officials insist that he pay security costs that they estimate at about $46,000 before he will be allowed to incite more violence and riots overseas. These are a near certainty because a lot of people in other countries can’t understand why the United States lets its citizens say and demonstrate about any fool thing they want to. END_OF_DOCUMENT_TOKEN_TO_BE_REPLACED