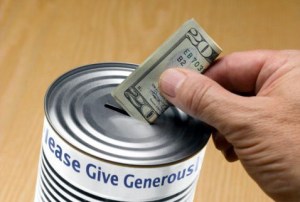 Where's the money going? Sometimes the charity has no idea.

A decade later after the attack on the Twin Towers, an Associated Press investigation has revealed wide-spread incompetence, dishonesty and waste among the many 9-11 memorial charities set up in the wake of the tragedy.

“There are those that spent huge sums on themselves, those that cannot account for the money they received, those that have few results to show for their spending and those that have yet to file required income tax returns. Yet many of the charities continue to raise money in the name of Sept. 11,” reports the AP. Among the fiascos recounted in the report:

Harris’s explanation is as amazing as Held’s.  He told the AP that he sees his charity’s work as a success even if there is no garden at the site. “I saw our mission as teaching about forgiveness,” he said.

As in “forgive us for stealing your money under false pretenses,” perhaps?

“You’re going to beat me up in an article because we’re bad managers?” Keyes asked the AP, plaintively.

Yes, Reverend, and you deserve every bit of it. In charity, as in all other pursuits, undertaking a task that you are unfit to manage is irresponsible and unethical, and accepting money, no matter how noble the purpose, without knowing how to use it and account for it properly while failing to meet the charity’s goals is a terrible breach of trust.

But Rev. Keyes had lots of company. In virtually every category of 9/11 nonprofit,  the AP analysis of tax documents and other official records revealed lies, schemes, ineptitude,  shady dealings, questionable expenses, sloppy record-keeping and deceit.  The fact that many of those responsible  had good intentions (though many did not) should not shield them from legal consequences. Charitable funds are precious, and the trust that charities engender is fragile, easily destroyed by charlatans and incompetents. Misusing and mismanaging donations  betrays the cause, the donors, and charity itself.

16 thoughts on “Memorial Ethics, Part Two: The Betrayal of 9-11 Donors”