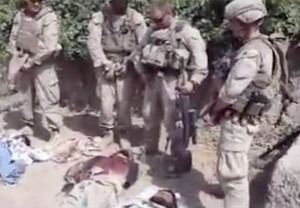 Doesn't it make you proud to be an American?

I don’t know why I didn’t see this coming, but indeed I did not. After all, when photographs surfaced showed American servicemen and women abusing, tormenting and torturing helpless (and untried) Iraqi prisoners at Abu Ghraib, the hard right, led by conservative radio talkshow hosts like Rush Limbaugh, Sean Hannity and Mark Levin, attempted to minimize America’s disgrace and the catastrophic failure of the military chain of command by wielding the worst of rationalizations.

“They do worse things to us!”

“They had it coming!”

“At least the soldiers didn’t saw their heads off, like the Arabs did to Daniel Pearl and Nick Berg!”

The fact that the atrocities in the prison violated the core values of the Declaration of Independence and the very foundation of America’s reason for existence—human dignity and inalienable human rights—never occurred to these warped culture warriors, who did not have the decency to be ashamed that the United States military would present itself to the world as bullies, thugs and sadists.

Now we, and the world, have seen a video taken by one U.S. Marine in Afghanistan of four of his colleagues gleefully urinating on the bodies of dead Taliban combatants. The Obama administration, hopefully having learned its lesson from the Bush Administration’s botching of its response to Abu Ghraib, immediately and unequivocally condemned the conduct of the marines and vowed that it will not go unpunished. (Whether there will be proper consequences for the brass responsible for such a catastrophic collapse of military discipline remains to be seen.) Of course this is the correct response, and the only responsible response,

Yet last night I heard talk show rant-master Mark Levin, dubbed “The Great One” by his talk show host colleagues (Jackie Gleason’s estate should sue for defamation), furiously denounce the Obama administration and praise the Marines. “The Taliban soldiers are animals!”, he shouted. “they don’t deserve respect—they deserve what they got!  At least we didn’t hang their bodies from bridges—-oh, right, that’s what they do to our soldiers! At least we don’t slice their heads off live on TV, like they did to Nick Berg!…These idiots say that these photos will cause our enemies to hate Americans; what, they’re going to want to kill us more?? I know–“Our soldiers don’t do that—well, I’ve got news for you: they do that and more, and I’m proud of them for doing it!”

On and on. American leadership looked weak and foolish for apologizing for the Marines; this is war, not fun and games; this is why America is losing its influence around the world. I tuned out before Levin said that we should give medals to the five Marines for pissing on the corpses, but I’m sure he must have said it at one point.

We should be proud that American soldiers piss on dead enemy casualties.

Levin is usually on the extreme side of any controversy; he routinely refers to President Obama as a Marxist, for example. But he was not alone in trying to minimize the Marines’ offense. Rep. Allan West, while agreeing that punishment was appropriate, sunk to the “they did it first” and “they did worse, so what we did isn’t so bad” rationalization, writing:

“I do not recall any self-righteous indignation when our Delta snipers Shugart and Gordon had their bodies dragged through Mogadishu. Neither do I recall media outrage and condemnation of our Blackwater security contractors being killed, their bodies burned, and hung from a bridge in Fallujah.”

Yes, Rep. West, that is because the horrible conduct of Somalis and Iraqis doesn’t represent and indict me or my country.

Breitbart Editor Dana Loesch adopted another of Levin’s themes—that the criticism of the Marines is just another example of  progressives showing how much they hate the military and, by extension, America. She wrote:

“This is nothing but an exercise in situational, exploitative outrage, and it completely proved the point I was making. The phrases “defile” and “desecration” popped up in my replies on Twitter every minute or so. If “desecration” is a concern for progressives, where was their outrage when the remains of over 200 Air Force members were dumped in a landfill? I’ve seen more outrage towards our troops over this incident than I have ever seen towards the Taliban themselves who’ve beheaded soldiers (American and Afghan), raped and tortured women, sent out suicide bombers, and carried out horrific attacks.”

You see, Dana, some of us believe in holding America and Americans to higher standards of conduct, not the inhuman and undemocratic standards followed by our adversaries.

There are many more defenders of the piss-squad, like:

Ah yes, Doctor: “Everybody does it” and “It’s done all the time”—the classics. Just what I would expect from a PhD.

There we go, the bottom of the barrel, as rationalizations go: “They deserved it” and the absolute dregs, “There are worse things.”

Yes, there are worse things, and if we laugh off pissing on enemy corpses, we are sure to get them. This isn’t a slippery slope, this is an abandonment of core values. Desecrating the bodies of fallen soldiers is a war crime, and it is a war crime because it is barbaric, a part of the same tradition as torturing, raping enemy women, killing male children and using prisoners as slaves. No, it isn’t My Lai, but a culture that believes, as Mark Levin thinks it should, that pissing on the enemy is something to be proud of will not sufficiently discourage soldiers from slaughtering those soldiers’ families.

The United States Marines are pledged to embody the highest standards of military conduct, as representatives of this great nation and the values it fights for. Its core values are “Honor, Courage, and Commitment,” but for this incident we need look no farther than honor:

“Honor requires each Marine to exemplify the ultimate standard in ethical and moral conduct.  Honor is many things; honor requires many things.  A U.S. Marine must never lie, never cheat, never steal, but that is not enough.  Much more is required.  Each Marine must cling to an uncompromising code of personal integrity, accountable for his actions and holding others accountable for theirs.  And, above all, honor mandates that a Marine never sully the reputation of his Corps.”

Go ahead, Mark, explain to me how the five Marines met this requirement. And explain to me how a nation that justifies its armed incursions on foreign soil by its historic commitments to human rights and dignity can be proud of soldiers who defile a mother’s dead son, treating the body of a human being as a latrine for no purpose other than to show hate and contempt. America should be proud of acts motivated by hate and contempt, perpetrated by professionals who carry it flag? This is the way conservatives view the soul and mission of the United States, as fueled by hatred?

Incidents like the desecration of the Taliban corpses and the extreme right’s repulsive reaction to them show the weakness of conservatives, who too often extol ethical values in the abstract but abandon them when called upon to hold its leaders, allies and icons to the same standards. The United States was founded on a glorious recipe containing the Golden Rule, an acceptance of utilitarian realities, and a few absolute principles, prime among then being that every human being has a right to freedom and dignity, and that this nation must never oppose that ideal. Yes, the nation has opposed that ideal many times—in slavery… in its treatment of Native Americans, minorities, immigrants, women and gays…in wartime adventures and atrocities… with inhuman medical experiments…at My Lai and Abu Ghraib, and the deplorable adoption of torture in the fight against terrorism. Always, however, we have found our way back to those ideals, because we had the sense, decency and integrity as a people to declare those acts wrong, to be ashamed, and to make our nation accountable.

Levin and his ethically blind colleagues and supporters do incalculable harm to our culture and corrupt our values by defending and even cheering the indefensible.

I am as ashamed of them and their words as I am of those Marines, who desecrated the United States and its people when they defiled the Taliban bodies.

26 thoughts on “The Darkness of the Right, Pissing Away American Values”