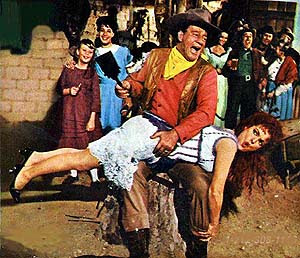 John Wayne paddling his wife (Maureen O'Hara) in "McClintock!" I love ya, Duke, but this isn't funny any more....if it ever was.

Violence inflicted by one partner in a relationship upon another is absolutely unethical, yet it is one of those embedded cultural habits from the bad old days that still flourishes. Over at the Whitney Houston post, where I am being over-run by the drug-legalization zealots, sicced on me by a sad website where people indulge their dreams of legally de-braining themselves on a regular basis, there is widespread contempt for the concept  that cultural norms of what is right, wrong and worthy of shame controls our worst impulses. That contempt is as crippling as it is ignorant, for controlling behavior is what cultures do, and why they are essential. And our culture is still giving confusing signals about domestic abuse. Two recent examples:

And many more in the same vein.

If women find abusers attractive, and worse, feel no shame in saying so in a public medium like Twitter, something has gone seriously astray with feminism, common sense, and values. An abusing pop star shouldn’t have any fans, much less get “He can beat me up” fan tweets. Domestic abuse will wane when the culture consistently sends a powerful message that love and abuse are incompatible, because one is the ultimate expression of ethical values, and the other is the extreme expression of unethical values. These tweeting women undermine that message.

It makes me want to belt them right in the mouth.

What, you didn’t think that was funny?

Then maybe you’ll understand the problem with this…

There are some things that need to join slavery, rape, racism and child abuse as things that we no longer joke about, and I nominate spousal abuse—by either gender— for membership in the club.

[ Thanks to my friend Laura Quinn Anderson for the Tweet trail]

102 thoughts on “America Is Severely Confused About Domestic Abuse”