Two Denver TV stations are feuding, and why? Because one of them refused to allow the other to suppress news footage that was embarrassing to a news anchor.

On February 8, KUSA-Channel 9 news anchor Kyle Dyer was interviewing the owner of Max, an 85-pound Argentine Mastiff, and the firefighter who had rescued the dog from an icy pond. I saw the video. Dyer had me wincing throughout the interview, showing herself to be the most dangerous kind of dog lover, someone who is fond of animals but naive and ignorant about their behavior.  She kept rubbing the dog’s ears and face during the interview, and the mastiff was obviously stoic but stressed by the strange environment, the cameras, and this women talking and running her hands all over him.  Mastiffs are gentle dogs, but very shy;  it was clear to me that Dyer was not according sufficient respect and caution to a powerful creature. As the interview ended, she suddenly moved in to kiss the dog on the muzzle, and the dog reacted defensively, biting her on the face and taking off part of her lip. She was seriously injured, and she had to have 75 stitches. 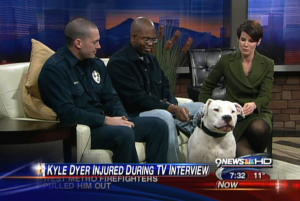 Kyle Dyer and the Mastiff, before...

Naturally, video of the incident quickly appeared on YouTube, and Channel 9 officials not only took steps to have it removed, they also asked the local stations not to show the footage, “out of concern for Kyle and her family.”  All of Denver’s other channels complied, except the Fox outlet. Ed Kosowski, vice president-news director for Fox 31 KDVR and KWGN-Channel 2,  ignored KUSA-Channel 9’s plea  and called those who complied “wimps” who “caved in to pressure from KUSA.”

The name calling was unnecessary, but it was Kosowski who made the right and ethical call. Channel 9 actively tried to keep the facts of the incident secret, downplaying the severity of Dyer’s injuries in medical updates it released that day. Viewers were told only that Dyer had been taken to the hospital for treatment, not that she was undergoing emergency reconstructive surgery.Then the station’s management recruited the other broadcast media in its cover-up. How dare they? The media reports the news, and concern for family and co-workers seldom enters into the decision to go with the juiciest story. Ah, but when a member of the club is at the center of the story, then the media feels it has the right to protect its own. This is a bright-line breach of ethics and integrity—not surprising, but not to be tolerated.

Fox 31 did its duty to the public, and, incredibly, is being criticized for it.  John Moore, writing for the Denver Post, rationalizes that “if Channel 9 is guilty here, better to be guilty of restraint than outright classlessness.” “Restraint”? How about “censoring the news for its own comfort”?  Fox 31 isn’t “classless” it is doing its job. My friends at Fark headlined the story this way: “After their anchor’s lip was bitten off on live TV, 9News asked the other networks not to air the video. Guess which channel was the only one not to honor the request. Go ahead, guess”…the implication being that this was just another example of Fox skirting the rules. Wrong, This was an example of Fox being the only one following the rules.

It isn’t as if the video has merely sensational value: it can save lives and lips. I am deeply sorry for what happened to  Ms. Dyer, but she was 100% at fault, and the video carries a valuable lesson about how not to interact with dogs, on camera or off.

The other lesson of this episode is that much of the news media can dish out tough news reporting and the relentless glare of publicity, but can’t take it. These are hypocrites, piously making speeches about “the public’s right to know,” but quick to use cronyism to protect themselves from similar scrutiny. On his Facebook page,  9News entertainment reporter Kirk Montgomery posted that there’s a special place in Hell for whoever at the local Fox affiliate has chosen to keep airing the video.  No, the special place is in Ethics Hell,  for the unethical journalists who think they have a right to apply a different standard of what’s newsworthy to themselves than they ruthlessly apply to the rest of us.

14 thoughts on “The Broadcast Media’s Golden Rule: “Do Unto Others What You Will Use Cronyism To Stop Others From Doing Unto You””

Leave a Reply to Arthur in Maine Cancel reply