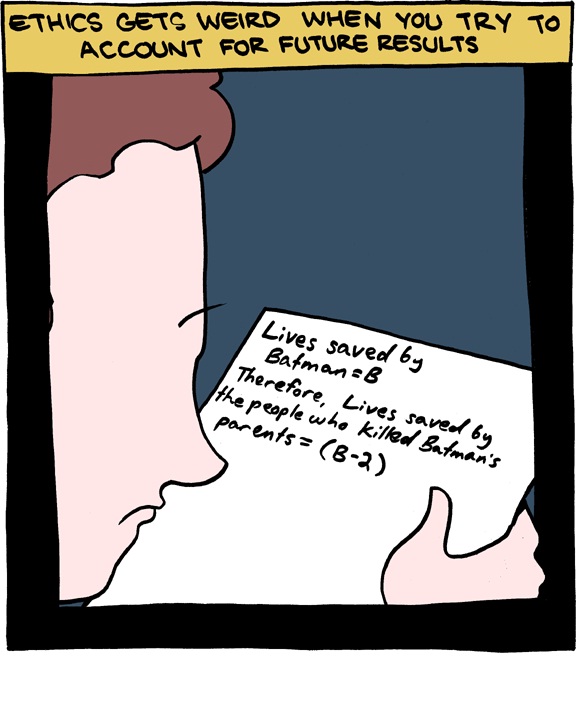 Tgt passes along this cartoon by Zach Weiner. He knew why I would like it: I am often railing about the misuse of consequentialism, justifying an act as ethical after it has produced desirable results. This fallacy bolsters “the ends justify the means” reasoning and makes every act, even clearly wrongful ones, theoretically redeemable in retrospect, after the results are in (although, of course, all the results are never in. That’s Chaos for you!)  The defense of torture by Bush administration defenders on the grounds that it may have uncovered valuable intelligence is the most recent example. Had the unconstitutional imprisonment of Japanese-American citizens in World War II  prevented some Japanese undercover plot by imbedded traitors, undoubtedly that fact would be used to justify an unjustifiable and disgraceful breach of American law and values. Looking backward creates this ethical distortion.

It is equally infuriating, to me at least, when good and ethical decisions are judged, usually by the media or by political pundits, as “wrong” or ” mistakes” because of bad results that could not have been foreseen when the decision was made or the act undertaken.

Weiner’s cartoon nicely marks the logical flaws in backward ethics, for those for whom the word “backward” is an insufficient clue.

12 thoughts on “How Consequentialism Leads To Bad Ethics: An Illustration”