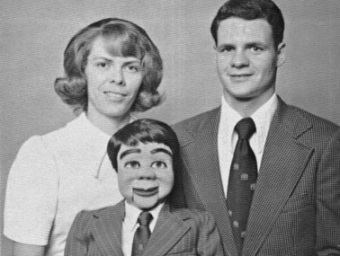 In the view of many (including me), the exact moment Jimmy Carter lost the 1980 Presidential election was when he used the closing minutes of the only Presidential debate to spin the tale, dubious at best, about his solemn conversation with his daughter Amy. Carter claimed that he asked her about her assessment of the most important issue facing the nation, and that  “the control of nuclear arms” was his thirteen-year-old advisor’s sage response. The story seemed insincere and manipulative, all the worse for Carter’s placing his answer in his daughter’s mouth for tactical purposes. Carter used Amy as a prop and a ventriloquist’s dummy. Even if the story was true, the tactic was offensive.

Here in Virginia, a closely contested “purple” state, the tactic of using children to carry political messages in full bloom. An ad for Republican Senate candidate George Allen, attacking opponent Tim Kaine and President Obama for their pro-abortion stance shows a series of cute “potential” children, facing the camera and telling us what they would have been in their lives—a mother, a fireman, a soldier (no homeless, serial killers or drug dealers, oddly enough)—if their existence hadn’t been snuffed out in the womb. Meanwhile, President Obama recently descended to the rock bottom level of the rest of his campaign by calling Mitt Romney “a bullshitter” by placing the epithet in the mouth on an anonymous 6-year-old girl.

With that kind of leadership model to follow, I suppose it shouldn’t be too shocking that far worse was on the way. A pro-Obama group called “The Future Children Project” has released an ad that represents a new low in the use of children as programmed messengers. Created by advertising agency Goodby, Silverstein & Partners, the spot shows a chorus of dead-eyed, sad children, shot in black and white, singing from a dystopian future about what America became because it didn’t re-elect Barack Obama. The lyrics:

We don’t have to pay for freeways!
Our schools are good enough
Give us endless wars
On foreign shores
And lots of Chinese stuff

We’re the children of the future
American through and through
But something happened to our country
And yeah, we’re blaming you

You did your best
You failed the test
Mom and Dad
We’re blaming you!

If you missed the part of Mitt Romney’s campaign where he promised to “fix” gays, let sick people ‘just die,’ pursue “endless wars,” recycle Reagan’s “Star Wars” weapons system, crack the earth, flood the oceans with oil and fight for the au pair deduction, don’t feel bad: the lyricist just made those up.*  The objective, after all, is just shameless scaremongering to frighten the presumably moronic “low information voter,” who will believe anything, that a victory for Republicans will mean a descent into Hell. This song would be inexcusable if it was sung by a chorus of 40-year-old PhD’s. Putting the words into the mouths of children, however, is both cowardly and an abuse of innocence. It’s clever, certainly: the ridiculously exaggerated lyrics can be excused by reminding critics that this is just kids talking from their innocent perspective. What the ad really is, however, is a way to make inflammatory, unfair attacks while hiding behind children who have no idea what they are saying, and cannot meaningfully consent to being preserved on the internet forever mouthing such garbage.

I have long believed that using children to deliver partisan campaign messages, including mothers turning their tots into little billboards by festooning them in “Vote for..” T-shirts and other paraphernalia, and teachers forcing classes to sing anthems to Presidents, is unethical, not to mention creepy. I would like to see both parties swear off the practice.

* In fairness, Romney did promise to make Big Bird pay his own salary. The Horror.