And speaking of the Curmies… 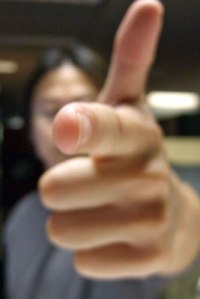 If finger guns are made illegal, only those with fingers will have guns. No, wait..if fingers that can be made into guns are illegal, only criminals will have fingers. No, that can’t be right…Stop me when we made our kids dumb enough…

Take post-Sandy Hook hysteria, add school no-tolerance idiocy, mix well in one of the most knee-jerk liberal communities in the nation, and what do you get?

A six-year-old in Maryland’s Montgomery County suspended from school for making a finger and thumb gun gesture, of course.

The NBC story concentrates on  “whether the boy understands the implications of the gesture.” What implications of the gesture? That he is about to shoot bullets out of his finger? That he intends to kill someone with all the firepower an unarmed 6-year-old can muster? That he is making a mimed reference to a Connecticut school massacre he probably doesn’t know a thing about? Why should it matter what his “intent is? It’s a hand gesture! It isn’t vulgar or threatening except to silly phobics in the school system.

This is, in order of importance,

The dismaying aspect of this is ridiculous episode is that it has happened before in other schools, and clearly the message wasn’t sent clearly enough to the previous offenders–that is, the fools who victimized innocent children for miming, drawing or otherwise suggesting guns—that this kind of conduct is a career-ender. It should be; it has to be. Such irrational fearfulness, bad judgment, panic, disregard for the sensibilities of the young, lack of proportion and brain dysfunction forfeits all right to trust, and such fools must not be allowed to have power over young bodies and minds.

UPDATE: The school rescinded the suspension.

36 thoughts on “The Montgomery County Finger-Gun Massacre of 2013: Who Didn’t See THIS Coming?”