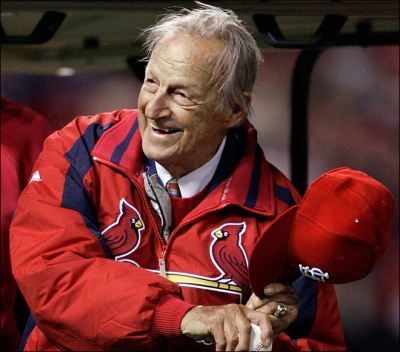 Baseball great Stan Musial is a different kind of lifetime ethics hero, which is one reason it is important to so honor him. Unlike everyone who has ever received that designation here,  the iconic St. Louis Cardinal had no famous episode that crystallizes his character for posterity, no inspiring quotes attributed to him, nothing at all as impressive by itself as his athletic feats on the baseball field, which were among the most distinguished of any Major League baseball career. What was remarkable about Stan Musial is that over three decades in the public eye and four more after leaving it, he never did anything wrong.

Musial remained with one team his entire career, out of loyalty to the city and the fans who loved him. He never complained about where he batted in the order, or where he played; though he spent a lifetime being overshadowed in the sports pages by more colorful, edgier personalities like Ted Williams, Mickey Mantle and Willy Mays, he never whined about it, or made transparent efforts to seek the spotlight. He famously gave out autographs to all who asked with grace and a smile, even when the inflated price of athlete autographs soared. His team mates say that Musial visited children’s hospitals without the press or photographers in tow, because he performed such acts of kindness not for himself, but for the kids.

Musial, it is fair to say, was not a leader in style or temperment. He lacked the double-edged qualities that constitute most leaders’ greatest assets and most persistent flaws simultaneously. Because he was neither an egotist nor a narcissist, Musial did not seek prominence, and was driven by shyness and modesty. He was neither flamboyant nor charismatic: in public appearances he was prone to play the harmonica rather than speak, because he was not an accomplished speaker. He did not challenge the positions of others, because he did not feel it was his place to tell people how to work, play and live. He just dedicated himself to do those difficult tasks the right way. If he was a leader at all, it was by example.

I have read many obituaries and personality sketches about Musial today to refresh my memory about him, and the most uncomplimentary word used to describe “The Man” is “passive”—-a quality that is anathema to leadership. He didn’t enlist in the armed forces when World War II broke out, like many of his contemporaries (like Ted Williams, who became a war hero); he waited to be drafted, and didn’t complain when he was asked to spend the war entertaining the troops by playing baseball. When Jackie Robinson broke the color line in his sport, Musial didn’t do anything overt to show support for Robinson, but simply treated him as if he were no different than anyone else, because Musial apparently didn’t have a bigoted bone in his body. Robinson, a leader and an activist by nature, saw this as a failure on the part of the game’s biggest star at the time.  After Musial retired, as when he played, he left the headlines and commentary to others. Ted Williams used his speech to accept being voted into the Hall of Fame to chide the Hall for neglecting the great players of the Negro Leagues, who were prevented from playing in the big leagues because of segregation and bigotry. Stan Musial used his speech to say “thank-you.”

Then again, everyone agrees that Ted Williams could be and often was a massive, self-centered jerk, petulant and moody, cruel and vindictive. Not Musial. When baseball analyst Bill James wrote his book ranking all the great baseball players by position, he shocked many by choosing Musial over Williams as the greatest left fielder of all time, despite statistics showing Boston’s icon to be the most valuable player other than Babe Ruth.  “(I)f I had to choose between the two of them, I’d take Musial in left field, Musial on the basepaths, Musial in the clubhouse, and Williams only with the wood in his hand. And Stan Musial could hit a little, too,” James explained. Williams was married and divorced three times, and neglected his children. Stan Musial was married to the same woman for over 70 years, until her death, and was an attentive father.

It is one of those revealing accidents of timing that Stan Musial passed away the same week in which we were treated to another athletic hero admitting how he betrayed his fans, and used his power and fame to create a massive self-driven conspiracy of lies and fraud. How many of our athletic heroes have disappointed, deceived and betrayed us in recent years? Yet if your hero was Stan Musial growing up, however, you couldn’t have been more secure, and neither could your values.

While he played baseball, Musial was a hero to millions of Americans, especially in the Mid West.  If he was your hero, what kind of a role model was he? What values did his life stand for, other than playing baseball as well as it has ever been played? Only these:

I think that qualifies Stan Musial as a lifetime Ethics Hero.

Standing prominently outside the new Busch Stadium is a large bronze statute of Musial that was unveiled on Sept. 29, 1963, the day he retired as a player, at the previous Busch stadium. On it are engraved the words of Baseball Commissioner Ford C. Frick, who dedicated the monument that day. Frick said, and the engraved words read:

Congratulations on an ethical life.

You made it look so easy.