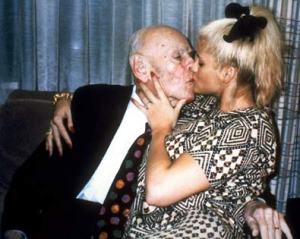 This could be you, “Sincerely Shallow” ! Go for it!

Emily Yoffe is Slate’s stunt advice columnist, who in her “Dear Prudence” column answers questions reminiscent of the freak-show howlers they used to concoct for the “Penthouse Forum” (or so I’ve heard.) Sometimes Emily’s advice has me convinced she is the consort of Pazuzu, and other times her advice is measured and wise. This time, she sided with the demon, and I’m about finished with her.

Here is the query sent by “Sincerely Shallow” in its entirety. I’m sure it’s viral by now:

Dear Prudence,
I’m recently engaged to the most honest, thoughtful, and loving man I’ve ever met. He has supported me through many hard times, including losing my job and being assaulted. Here’s the but about him: He makes no money. He has ambitions, and he’s smart, but will likely only bring a middle-class income at best. I have an OK job and I’m self-sufficient. Now here’s the but about me: I’m really, really pretty. My whole life people have told me I could get any man I want, meaning a rich man, and are shocked that I’m engaged to my fiancé, nice though he is. I’ve never dated a rich man, but it does make me curious. So part of me thinks I’m squandering my good looks on this poor man, and the other part of me thinks that I’m so shallow that I don’t even deserve him or anyone else. Am I a fool for thinking that a poor man can make me happy, or an idiot for believing a sexist fantasy?

You can read “Prudence’s” annoying answer here, which concludes with this:

“You’re not a shallow fool for thinking that a life of scraping by won’t be so pretty.”

No, she’s a shallow fool because she is seriously considering seeking the age-old woman’s bargain of trading in her short-term sexual attractiveness and bedroom favors for a life of supposed luxury, even though her resulting partner probably won’t be as admirable as the lovely man she has already committed to. I’m sure her self-proclaimed allure has blinded him to her obvious and serious flaws—she’s an exploitive, ungrateful, venal twit—but she really does owe him the benefit of her damning calculations.

Middle class equals “loser” in her eyes, even when he has bailed her out of trouble when she was unemployed. Her letter tells us that “Sincerely” lacks loyalty, gratitude, appreciation of character and respect for qualities that don’t translate into diamond bracelets. It tells us that she equates a good life with an easy life, and that material things matter more to her than love, initiative, sacrifice, courage, perspective, compassion….oh, how long this list is.

She’s worried about “squandering her looks” when she could really cash in, like Anna Nicole Smith did when she married ancient billionaire J. Howard Marshall. (Anna Nicole’s daughter finally collected Anna Nicole’s payoff, in a $475 million court award. The late Anna Nicole. Post Howard, she spent her final years in court trying to collect, humiliating herself by appearing fat, drunk and stupid on a reality show, getting back in millionaire-hooking shape just in time to bear a daughter of mysterious parentage, and dropping dead of drug abuse before she was able to cash in her momentary good looks a second time. Go for it, SS! It’s a plan!)

If Yoffe had her own values aligned properly, she would have told this vain and vile gold-digger that it was her future husband who would be squandering his virtues on a trivial human bauble like her, and that she should do him and the gene pool a favor, show him the moldy ugliness beneath her glamorous surface, and go on a hunt in Vegas, Wall Street, the Poconos or various cardiac clinics to become a trophy wife. I’m sure she’ll make some rich, horny, wrinkled old bastard very happy, and doubtlessly propel him to an early grave. It only cost Anna Nicole a year for Marshall to kick off.

9 thoughts on “Dear Sincerely Shallow: “It’s True, You’re Horrible. Show Your Fiancé Your Letter, And Go Pimp Yourself Out Like Anna Nicole.””