“We fail to see any reasonable connection between this defendant, his conviction more than a decade ago, his failure to fill out paperwork, and the government-mandated measurement of his penis.”

—- The 2nd U.S. Circuit Court of Appeals, rejecting as “extraordinarily invasive”a Vermont sex offender treatment program that required David McLaurin, who was convicted of producing child pornography, to submit to “penile stimulation treatment” as a condition for supervised release. He was shown child pornography images as the blood flow to his penis was measured. 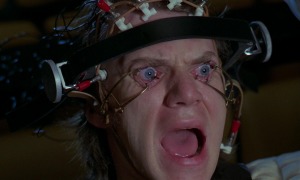 Cheer up, Alex…it could be worse, You could be in Vermont…

McLaurin was arrested in 2011 for violating the federal Sex Offender Registration and Notification Act, which requires offenders to register and keep current their address information. He  received a sentence of 15 months imprisonment with five years of supervised release.

“The size of the erection is, we are told, of interest to government officials because it ostensibly correlates with the extent to which the subject continues to be aroused by the pornographic images,” the opinion states, dryly. The testing was apparently developed by a Czech psychiatrist and used by the Czech government as a way to identify and “cure” homosexuals.

Uh, yes, I’d say the court got this one right.

12 thoughts on “Ethics Quote Of The Week (“Believe It or Not!” Division): The 2nd U.S. Circuit Court of Appeals”