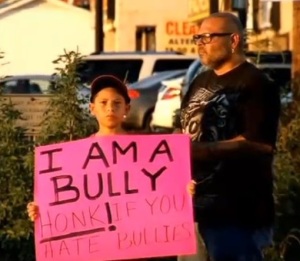 Gee, I wonder why that kid is a bully?

Police in Winter Garden, Florida have arrested and charged Christle Prado and her, ah, “roommate” for forcing her 10-year-old son to wear a dress, and then posting photos on Facebook to humiliate him. Discipline, you see; he had wet his bed.

The model mom and Keith Driscoll were charged with cruelty toward children and infliction of mental injury on a child.

I’ve written about web-shaming children before, and characterized it as child abuse, which it is. A maxim here is that when ethics fail, the law must take over. It is a poor second option, but for this couple and those like them, including the parents of the boy in the photo to the left, it is a necessary and an ethical one.

Police learned about the abuse after one of the boy’s relative saw posted photos of the boy dressed as a girl and wearing makeup. He was crying. I wonder how many of Prado’s friends “liked” those photos on Facebook? Prado told police that Driscoll came up with the idea to dress her son like a girl as a way to discipline him, went along with it because she “did not want to cause problems with her living situation.”  Oh, well, that’s all right then, ma’am—you can go now. Driscoll, you see, is her sleep-in landlord.

Yechhh. I wonder what else she’ll do to her son to keep that cozy relationship peaceful? Cigarette burns? Whipping? Water-boarding?

The child cruelty charge is a second-degree felony. I’m all in favor of expanding such charges to apply to the parents who post photos of children holding signs that read “I pooped on the floor” and other self-incriminating screeds compsed by mom and dad, even those who aren’t doing it to interfere with their sex-for-rent arrangements. In fact, I’d expand it to include those Jimmy Kimmel fans who make YouTube videos of their children crying because their Christmas gift appeared to be old sweat socks or broccoli, in the hopes that Jimmy will make their exploitation of their own kids go viral. (An excellent discussion of everything that is wrong with child-shaming on the web can be found here.)

Using the web to humiliate your powerless children—forever, remember—is wrong, but if parents are so stupid, cruel and ethically inert that they can’t fathom this basic Golden Rule principle, it should be illegal too.

22 thoughts on “Criminal Charges For Web-Shaming? Sure.”