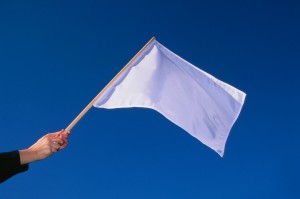 Forty six rationalizations have been added to the Ethics Alarms Rationalizations List, and today I not only stumbled upon a carelessly omitted one, but realized that it belongs near the top.

Ethics Surrender, or “We can’t stop it,” is the rationalization that argues that if society is incapable of effectively preventing unethical conduct, for whatever reason, we might as well stop regarding that conduct as wrong. This is yet another variation on the most common and insidious rationalization of them all and #1 on the list: “Everybody Does It.”

The Golden Rationalization has many variations, among them…

“It’s always been done this way.”

“Everybody is used to it.”

“It’s too late to change now.”

…and others. Ethics Surrender, however, warrants particular attention, as it encourages moral cowardice and ethics complacency. “We can’t stop it” is a lazy capitulation that assumes cultures can’t change, and we know they can and do change, both for better and worse, all the time. One society has been convinced, though legitimate, persistent, coherent and ethically valid arguments, that a common practice or conduct is bad for society, society can stop or seriously inhibit that unethical practice of behavior, either by law, regulation, or best of all, the evolution of cultural consensus. The examples of an Ethics Surrender resulting in undesirable societal consequences are too numerous to list, and many of them are still controversial. I would assign having children out of wedlock, adultery, lying by elected leaders and the use of illegal recreational drugs to the “We can’t stop it, so let’s say it’s not so bad” category. The most obvious and currently significant example is illegal immigration, wrong, but increasingly being rationalized by both advocates and lawmakers who have run out of ideas and principle. At this moment, we are hearing the defenders of dubious police shootings making that argument to avoid examining possible changes in law enforcement policy so there will be fewer deaths without putting police in peril.

Ethics is hard. Rationalization 1A, Ethics Surrender, or “We can’t stop it,” wrongly concludes that it is impossible.

11 thoughts on “Introducing Rationalization 1A: Ethics Surrender, or “We can’t stop it””