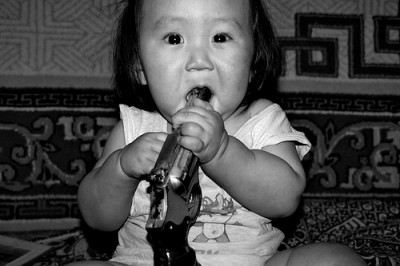 This time the locale was Elmo, Missouri, and it was a five-year old pulling the trigger. The victim was a 9-month-old boy, but it’s basically the same tragic, stupid story….just like in the Idaho Walmart, where the two-year-old shot his mother, or the Albuquerque motel room where another toddler shot both of his parents, who were just lucky and lived. (They have been charged with child abuse. Good.) A gun owner negligently, recklessly, criminally leaves a firearm, loaded, where  young children are and a tragedy results.

Alexis Widerholt, the mother of the children, called 911, and when emergency crews arrived they found that her the baby had been shot in the skull with a .22-caliber magnum revolver.

Somebody has to go to jail for this, maybe several people. Authorities say the gun belongs to a relative, but not the mother. If she knew the gun was in the house, she’s accountable. Anyone responsible for putting the loaded gun where a kid might find it is accountable. Charge them with manslaughter, convict them, send them away. Unless the mother didn’t know about the gun (she originally told the police it was a paint gun, either out of panic, confusion, or ignorance), she needs to lose the right to parent them, at least for a while.

There are four irresponsible reactions to these tragedies that we should stop tolerating and immediately rebut whenever they surface:

1. “This is why we should ban guns.” Responsible people shouldn’t have access to a useful, sometimes life-saving, even democracy-saving tool because the tool is misused by irresponsible people, including criminals? Unfair, and fortunately prohibited by the Constitution, because gun-phobic hysterics bombard the public with propaganda like this nonsense: 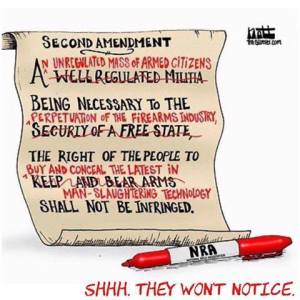 People, a lot of people, believe this is a cogent argument.

2. “This has nothing to do with the need for stricter gun regulations.” Of course it does. I would have no problem with a requirement that any gun being kept by a parent or someone living with children meet reasonable, legally enforced security requirements. I would have no objection to the state doing spot checks on the status of such weapons as a condition of ownership. I would have no objection to any individual who is found to have left a loaded gun within reach of a child being prohibited from future gun ownership, or losing custody of their children. Heck, give them a choice: a gun or a kid, but not both.

Sure, the NRA would fight all of these. That’s their job.

3. “We are big supporters of firearms around here. We live in a rural area. We have a lot of people who own weapons. They hunt. They shoot.  Most people are very safe with them, and this is one of those cases where everything went together in the wrong way.” That was the rationalization of the sheriff in Elmo, and the father of Veronica Jean Rutledge said something similar. Oh, shut up. I am beginning to believe that so-called “gun people” may be the worst and most reckless gun owners, because too many of them are insufficiently attentive to the potential dangers the guns present.  They are too used to them. I think the most responsible gun owners may be people like my Dad, who had fired guns (and shot human beings with them), could take them apart and assemble them, and who was scared to death of them, even though we had several in our home.

4. “The parents have suffered enough.” No, they haven’t. They need to suffer more, and their tragic fate, including dead kids, a trial for manslaughter and a long prison sentence, needs to make headlines and get the attention of every careless potential child-killer out there, and I’m sure there are many….so many, that we should be very concerned.

Because this has to stop.

99 thoughts on “One More Time As A Child Finds A Gun And Kills: Prosecute the Parents”