“The court’s legal analysis in Arizona State Legislature v. Arizona Independent Redistricting Commission was something of a reach. But the ruling’s practical implications are unequivocally positive.”

—–The Washington Post in an editorial praising the Supreme Court’s approval of Arizon’s unconstitutional solution to the persistent problem of gerrymandering abuse. 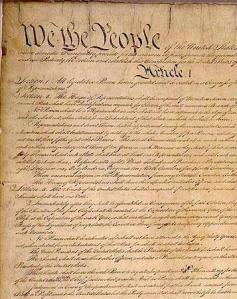 The Post’s quote means nothing more nor less than “the ends justify the means.” “Something of a reach” is a shameless equivocation: John Roberts’ dissent to the 5-4 majority’s “legal analysis” —there really is none—resembles Mike Tyson slapping around Honey Boo-Boo. The decision’s argument approving the Arizona end-around the Constitution’s Elections Clause that reads, “The Times, Places and Manner of holding Elections for Senators and Representatives, shall be prescribed in each State by the Legislature thereof” can be fairly summarized as “this will work, so the Constitution be damned.” It’s not a “reach.” It’s  obvious defiance of what the document says.

It that so bad? It depends on what you think is more important, integrity or solving a problem. All of the big Supreme Court decisions in the past week have essentially raised this ethics conflict, and it is clear that the liberals on the Court is on the side of solving problems—at least as they see them— even when it means compromising what the Constitution says and what the Founders intended who drafted it, with the libertarian Justice Kennedy, who tends to lean away from laws constraining citizens anyway, often joining the  colleagues to his left. This issue is as stark an example as there can be,

Gerrymandering is unethical and anti-democratic. It was not foreseen by the authors of the Constitution, who can’t be expected to have predicted every devious political maneuver their successors would come up with to pollute their ideals. Unfortunately, the Constitution doesn’t provide a way for the public to stop the practice, other than electing less corrupt legislators, and legislators use gerrymandering to make that exceedingly difficult. A tweak of the wording in the Constitution could carve out an exception, but the Founders also made amending the Constitution in any way at all an almost impossible chore, including amending it to allow easier amending.

What’s a country to do? Well, sometimes the ends really do justify the means: that’s what utilitarianism means. If the Court can kill or limit gerrymandering by, as John Roberts felicitously put it in his dissent, gerrymandering the Constitution, it might be a good choice on balance. It benefits democracy. The conservatives argue, however, and legitimately so, that such a decision also creates a dangerous, even sinister precedent despite its good intentions (none of the Justices seem to think that gerrymandering is anything but unhealthy for democracy). What other laws that violate the plain words of the Constitution will the Court approve because its “practical implications are unequivocally positive,” to the cheers of partisans?  How many times can the Court do this before the Constitution is a dead letter, and any executive–or despot— can claim that government action, regardless of what Constitutional guarantees oppose it, is to be rubber stamped because it solves a real problem?

That is an existential concern, and commentators like the Post who ignore it because the short-term benefits of defying the Constitution in this case pleases them are being irresponsible. This is the ethical conflict, expressed in my favorite ethics quote, from the character of Sir Thomas More in this scene from “A Man For All Seasons” (I know I’ve quoted it before: good. We should all read it to ourselves every day of our lives, or watch this clip, until it is committed to memory and etched on our souls):

Yet More is expressing an absolute, and all absolutes have exceptions. Sometimes the ends are so important that they do require a significant breach or law or ethics. Sometimes the Supreme Court’s conservatives have recognized that as well. Is gerrymandering a proper ill to justify temporarily tearing down the law to stop the Devil, risking the long-term risk of having no law at all?

I don’t know. I do know that before we cheer such a decision, we should understand its ethical and legal significance beyond the “practical implications.”

[Update: Rick Jones, one of my favorite bloggers, has an excellent post on this up now, especially helpful for its background on gerrymandering.]

26 thoughts on “Ethics Quote Of The Week: The Washington Post”