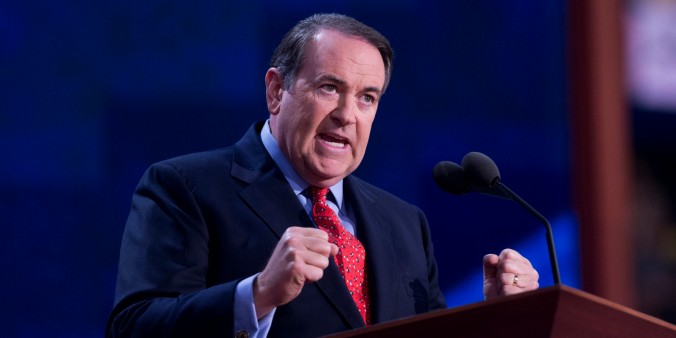 Political reporter—not humorist, not feature-writer, but reporter—David Farenthold of the Washington Post wrote a long feature (it is a hit piece, disguised) called “81 Things Mike Huckabee has denounced.” It doesn’t matter to me which politician this kind of junk is written to trash: Huckabee’s as deserving a target as anyone. On my rapidly growing list of candidates I would take a hacksaw to my neck before voting for, he is filed somewhere among Rand Paul, Bobby Jindal and The Donald. Farenthold’s  article itself would be unethical if it was written about The Green River Killer. It is in that horrible abuse of journalism category known here as “Making Readers Dumber and Less Ethically Astute Than They Already Are.

Here are the 29 reasons why I am denouncing “81 Things Mike Huckabee has denounced.”

It’s pretty obvious what the post is about, but the author doesn’t have the guts or the honesty to admit it. The real title should be, “Mike Huckabee opposes gay marriage, so it’s okay for me to trash him about everything I can think of whether it’s fair or not.”  After correctly noting in his reasons 3 (“Same-sex marriage”) and 4. (“The Supreme Court decision that legalized same-sex marriage nationwide.”) that Huckabee is not a fan of gay marriages,  Farenthold also devotes 68 though 79, plus 81, on his list of his  “things” directly to this, and in deceitful fashion  places the last 13 of them at the end of his list. Many are misleading in the context of his stated purpose, giving me seven reasons to denounce his list:

…a denunciation of  “Same-sex couples in TV shows.” Pointing out a statistic is now “denunciation”? (Reason #4)

We get it, Dave. You really, really dislike politicians who don’t support gay marriage and believe it should not be made a right. You could make that point legitimately rather than grossly mischaracterizing the nature of the arguments of one of them who disagrees with you.Reason #8.  Farenthold’s underlying message is that leaders shouldn’t presume to make ethical judgments. He is 100% wrong. My business is making ethical judgments and to help others make them competently and objectively, using proven standards and methods. Naturally, I get periodic comments and e-mails characterizing what I do as ” sanctimonious” and “presumptuous” by those who hold that all ethics and values are subjective, and nobody has any right to tell someone else that they have done something that ethical people shouldn’t do. We all have to engage in ongoing debate about right and wrong to ensure that the culture and the society we live in is bearable, nurturing, safe and productive. Leaders have a special obligation to do this. “Denounce” means to “publicly declare to be wrong [that’s an ethical judgment] or evil [a moral one]. Not only is Farenthold criticizing Huckabee’s choice of wrongs, he’s assailing the practice of denouncing unethical conduct. Such are the liberal and libertarian anarchists who are urging us to embrace chaos as a lifestyle. Yes, I’m denouncing them, and him.

Reasons #9-19. As I noted earlier, Farenthold’s use of “denounce” is either disingenuous or ignorant. If ever Inigo Montoya’s quote was appropriate

…it is here. There eleven examples where Farenthold falsely calls Huckabee’s statements “denunciations.”

8.) The Constitution, because it allows Supreme Court justices to serve for life. “I will fight for term limits.”

Again, not a denunciation. There is nothing inconsistent in saying “I adore chocolate cake” and “I must avoid it like the plague.”

See above. This is also in category of unethical writing that I will take up next, dishonest representations of alleged hypocrisy that are nothing of the kind.

18.) The actress Jamie Lynn Spears, for being pregnant and unmarried. “A tragedy.”

Right. Saying that a high profile teen actress getting pregnant is a “tragedy” is denouncing the actress. Of course, Farenthold probably sees nothing wrong with unmarried teens getting knocked up.

How is saying that anyone is “fair game” for public criticism a denunciation?

29.) Megyn Kelly, Fox News host and New York woman. Kelly: “I do have news for you…we are not only swearing. We’re drinking, we’re smoking, we’re having premarital sex with birth control before we go to work and sometimes [we] boss around a bunch of men.” Huckabee (laughing, mock-offended): “I just don’t want to hear that.” (2015).

There are a lot of things I don’t want to hear. That doesn’t mean I denounce them.

41.) Men at his Baptist college, for watching the women so closely. “They couldn’t help but look, but…they didn’t have much respect for the girl who left little to the imagination.” (1974)

I don’t understand this one at all. Either Farenthold didn’t understand the quote, or he’s just dumb. Huckabee was saying that they men shouldn’t have respect for scantily clad co-eds; he was agreeing with them, not denouncing them.

54.) The Arkansas Symphony Orchestra, for serving champagne during intermission. “Somehow, I fail to see the connection between symphony music and champagne.”

So do I. Am I denouncing the orchestra?

Saying that climate change is real is denouncing it. Really. Fascinating.

56.) People who insist that climate change is real. “One who questions the politically driven agenda of global warming is called ‘anti-science.'”

Just to keep score, the two examples of fake hypocrisy above count double, so we’re up to twenty-two reasons to denounce Farenthold’s list.

Reasons #23-27: Unfair and misleading suggestions of hypocrisy or inconsistency.

7.) The Supreme Court, in general. “They must be committed to…applying the original meaning of the Constitution.”

8.) The Constitution, because it allows Supreme Court justices to serve for life. “I will fight for term limits.”

This is obviously a ridiculous accusation. The Supreme Court should apply the Constitution as intended, until the text of the document is duly changed.

14.) People who are constantly taking offense. “Being offended is a full-time job for many. It’s a tedious task, for it requires enormous amounts of imagination and creativity, [and] relentless pursuit of an audience willing to swallow the notion of the offense.” (2015)

If Farenthold really thought these three statements were inconsistent (this trio counts as two deceits on my list, by the way) it would mean he was a dolt. But I don’t think so: he’s just a biased hack, doing what biased hacks do: manipulate the truth to smear people he doesn’t agree with. 13) isn’t inconsistent with 12), for criticizing the President regarding something Huckabee sincerely finds objectionable (so did I, and so did many, including some non-Republicans) does not preclude him from criticizing those who “question every motive of Barack Obama,’ especially since the statement Farenthold uses to imply hypocrisy doesn’t criticize the President’s motives, but his conduct.

Similarly, Huckabee taking offense at Obama’s (silly, careless, badly prepped) show of deference to a foreign despot isn’t “constantly taking offense,’ even if Farenthold, lapdog that he is, can’t bring himself to understand what was wrong about Obama’s bow.

19.) The media, for criticizing Bristol Palin after she became pregnant while unmarried. “The most shameful thing I’ve ever seen in my life…Everyone understands that the basis of being a Christian is that everyone has fallen short of God’s ideal.” (2008)

20.) The actress Natalie Portman, for being pregnant and unmarried. “It gives a distorted image…most single moms are very poor, uneducated, can’t get a job.” (2011).

Quick, what’s the difference between a teenaged girl thrust into unexpected fame because her mother gets selected to run for Vice-President, and a movie star? Who is a celebrity, a role model and knows it, and who isn’t?

Six months is plenty of time to see how a program is being run and to decide that it is malfunctioning.

There are real inconsistencies in other Huckabee statements on the list, to be sure. An ethical journalist would have confined himself to those.

Reason #28. Many of the items on Farenthold’s list landed there to implicitly ridicule Huckabee’s religious faith and traditional values. The man’s an ordained Baptist minister! Yes, he has “denounced” promiscuity, profanity, homosexuality, sexual lyrics in pop music, profane vandalism, immodest dress on college campuses, overtly sexual pop stars, “twerking,” celebrities who post nude photos of themselves and movies that he found disrespectful of religions and God.  Farenthold is incapable of distinguishing which of these are unreasonable and which are opinions that ought to be respected. They are all worthy of mockery to him. His list tells us a lot more about the Post reporter than it does about Mike Huckabee.

Reason #29. The list wants us to think less of Huckabee because he has “denounced”:

11.) President Obama, for letting his daughters listen to Beyonce.

14.) People who are constantly taking offense.

17.) “This list, which is an annotated catalog of things and people that Huckabee has over the last four decades decried as unwise, unhealthy, un-conservative, un-Biblical or un-American. It runs to 81 items. Which is not all of them. But it’s enough to show the risk of a life spent passing moral judgments for political gain. “Governor is hard at work on the campaign trail today, talking to the people of Iowa about issues that are important to them…If you have a question about that, please let me know.” (2015, from a spokeswoman for Huckabee’s 2016 presidential campaign spokeswoman, describing why Huckabee would not talk about the list.)”

20.) The actress Natalie Portman, for being pregnant and unmarried. “It gives a distorted image…most single moms are very poor, uneducated, can’t get a job.”

27.) Profanity used by men in the presence of women..

28.) New York women, who use profanity in front of men.

37.) President Obama, for saying that U.S. gun laws were a root cause of this month’s mass shooting in Charleston, S.C.

46.) Men who go shirtless on the street…