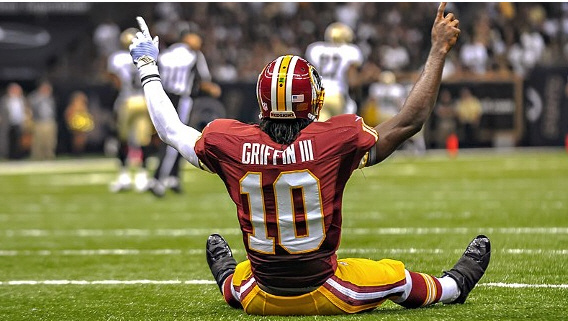 I’m really sick of the “an intern did it” or ” a low level employee did it” explanation when a social media tweet, re-tweet, “like” or message goes wrong and causes an uproar that causes trouble for a celebrity or politician. It’s your name, the person sending the message is your employee and agent who you have authorized to communicate in your name. For the purposes of social media, they are you. Take your medicine, be accountable, own what “you” say online, or get off social media. It’s really as simple as that.

Robert Griffin III is the central figure of a pro football drama that many of those outside of Washington, D.C. or, better yet, those who recognize that pro football is ethics rot put in colorful uniforms to maim minds and and make money every Sunday for more than half the year. Once an NFL rookie of the year, a blooming super-star black quarterback in a majority black city, and the lord of all he surveyed, RGIII, as he is almost exclusively called locally, has fallen far, brought low by bad coaching, injuries, and his own hubris. His one great advantage has been the Skins’ owner’s infatuation with him, as Croesus-like Daniel Snyder runs his franchise like Fantasy league team, and also into the ground.

So how does “RGIII,” a.k.a. the anonymous kid who sends out his tweets and other messages when the star is busy doing what young millionaires do, decide is a great is a great way to show his loyalty to his patron and the man who pays his salary? “He” likes a post from an angry fan that features the hashtag, #inpeachdansnyder.

RGIII, recognizing that this was an especially bad time to tick off his guardian billionaire (he had just been benched by the Redskins’ coach), sent out his own, genuine, reallyreallyreally what he thinks post blaming his intern:

@rgiii I just wanted to set the record straight on this one. I did not “like” that IG post ridiculing our team. I have not been social media active consistently for awhile now and am ultra-focused on working to get back on the field and trying to help this team. One of our interns who helps with Instagram liked the post. As soon as I was made aware of it, it was immediately unliked. That is not how I feel and I appreciate your understanding.
#HTTR

No, actually “you” did like that post, Mr. Star. And if you have “not been social media active,” stop paying someone you obviously don’t supervise to keep you socially media active.

I’m glad they benched you.

(At least Donald Trump makes his own offensive tweets.)

6 thoughts on “Ethics Dunce: Washington Redskins Quarterback Robert Griffin III And Any Other Celebrity Who Has Somebody Other Than The Celebrity Send Out Social Media Messages In His Or Her Name”