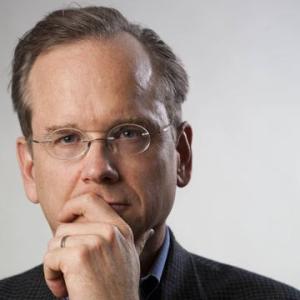 Full disclosure: Because I believe that nobody in the history of photography who wasn’t pompous as hell posed this way for a picture, and because Lessig has several pictures in this pose, I wouldn’t trust him anyway.

[Running out of time tonight, due to an unexpected crisis. Unethical Presidential Candidate Sunday will be extended into Labor Day. I have four posts in the can…]

Harvard Law Professor Larry Lessig, being either  bored, puckish, naive or having had a psychotic break, has declared his candidacy for the Democratic nomination for President with the following “plan”:

Lessig’s political accumen, seriousness, and sanity can be gauged, accurately, I’d say, from his initial proposed list of possible Vice-Presidents, the real individuals anyone who voted for Lessig would be voting for, since his candidacy by definition is a sham. They include…

“Other” is a more promising candidate than almost every one of the others, one of whom, one, has executive governing experience. Three are socialists, and one of them is a truther and probably a Communist. Three others have never been involved in government at all. Webb is far, far to the right of the rest, indicating that either the professor doesn’t know these candidates well or just doesn’t care about who succeeds him as President. This is known as “irresponsible.”

Because this guy teaches at Hahvahd and the media has apparently decided that the vital 2016 national election should be treated as a freak show, this absurd platform got the Professor (I can’t wait for Mary Ann’s announcement) an interview on “This Week  with George Stephanopoulos”, on which he intoned,

“And we have to find a way to elevate the debate to focus on the changes that would actually get us a government that could work again, that is not captured by the tiniest fraction of the 1 percent who fund campaigns and make it impossible for our government…. And also dealing with crazy way we have political gerrymandering where politicians pick the voters rather than the voters pick the politicians.”

So the way to “elevate the debate” is to have a presidential election polluted by grandstanding amateurs and one-issue attention-seekers including Lessig, who seeks to distort the Constitution’s text and intent and run a campaign in which the Vice Presidential candidate is really the Presidential candidate, and the man elected as the more trustworthy and skilled of the two (since only he can get the magic law passed despite the fact that it consists of multiple bills that have failed) thinks it is reasonable and responsible to make a TV comic and intermittent pundit the most powerful person on Earth. Got it.

Later in the interview, George asked,

To which Lessig breezily answered:

Well, I’m absolutely sure we can trust. I mean, of course the vice president has to be consistent with the values of the Democratic Party, and I’m very much committed to having a candidate who could excite the Democratic base.

Sure, who wouldn’t trust Hillary Clinton, who is on Lessig’s list? Van Jones represents the values of the Democratic Party? And Jim Webb?

My guess is pathological academic isolation and arrogance, combined with extreme contempt and lack of respect for the art, science and craft of politics and governing. Lessig has no background in political science, despite all his degrees in other fields. He’s a lifetime academic, his main interest is intellectual property law reform, and he has said that amateur politicians are better at the job of governing than professionals, a position exactly as reasonable as making the equivalent observation about law professors, neurosurgeons and lion tamers. Thus he thinks Barack Obama is a great President or told George so, even though he wants to overhaul the Constitution because Obama can’t get his policies through Congress. If I hear Lessig right, he thought the process that railroaded the Affordable Care Act through was just dandy, though it was a travesty of democracy and even though the vast majority of the public opposed it. Yet he sees the absence of government following the will of the voters as the problem that must be addressed.  How is that inconsistency possible?

Simple. Lessig is an academic activist and leftist who believes that progressive policies and laws must be in the interest of democracy even if the principles of democracy have to be shredded to achieve them. He’s a prominent ethicist too, so he thinks this is ethical.

Since Lessig seems too smart for this crack-brained scheme, I have to wonder if it’s really a diabolical plot. After all, there is no chance, none whatsoever, that his Citizen’s Equality Act can be passed, unless he abolishes the Republican Party and holds a Constitutional Convention that he controls with assault rifles (Lessig would love to eliminate the Second Amendment, it appears). Thus he would never have to resign—which if Hillary or Van Jones is VP, might be a mercy—and the United States would be lumbered for four years with a completely incompetent Chief Executive with no political expertise or skills and no interest  or acumen in foreign affairs, and whose idea of responsible appointees to high positions are comedians, truthers and socialists.

Another possibility is that Lessig is performing an experiment to see just how stupid the American people are. He obviously thinks they are incredibly stupid, even though it is he who has made the classic error of confusing abstract theory with reality. His campaign website addresses readers as if they are children. His tone is unserious; he says his suggestions for Vice President are “fun.” This is obviously a game to him. Mucking with the leadership, laws and future of our nation is a diversion to him, a hobby, a lark.

I have had several jobs, difficult ones, in which I constantly had complete naifs presume to instruct me based on the assumption that anyone could do what I did. Fundraising. Marketing. Stage Directing. Being a leader is like this too: it’s incredibly difficult, takes talent, study, courage, multiple skills and luck, and yet everyone thinks they can do a better job than the professionals. This delusion  is especially common among scholars and professors, only a few of whom understand their limitations and the brain-warping effects of spending most of one’s time surrounded by knee-jerk liberal colleagues and fawning students.

I stand in awe of Lessig’s intellect and accomplishments, but his candidacy is yet another worthless distraction in a process that already has too many of them.   It is also evidence, as if we were lacking any, that really really brilliant people in one field can act like brain-damaged jackasses in another.

As I told the Georgetown professor who approached me when I was running the law school’s capital fundraising program and asked, “Have you ever thought about approaching corporations that have prominent graduates in management or on their boards to give the school a grant?”:

“Do you have any idea how insulting that question is, and how foolish you make yourself look when you assume that you, with no experience or practical knowledge, can solve the problems of my job better than I can with your stray thoughts in your spare time?”

Lessig’s embarrassing stunt at least has one virtue: it shows everyone exactly how foolish this kind of presumptuousness makes someone look, even when he is a Harvard Professor.