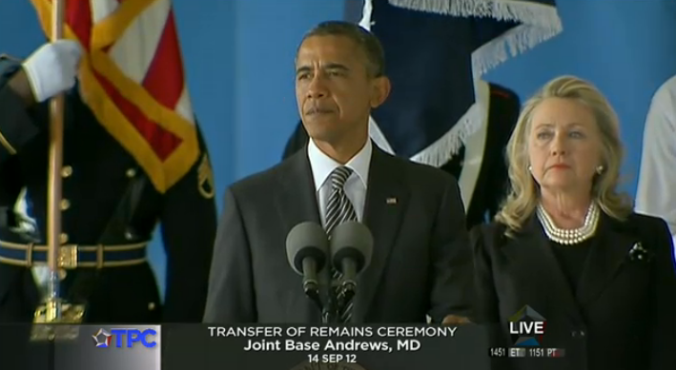 An Ethics Alarms commenter alerted me  that Politifact is holding its annual “Lie of The Year” poll, and only one of the nominees is a Hillary quote, an inconsequential one at that (“The gun industry is the only business in America that is wholly protected from any kind of liability.”) Well, PolitFact is one of the most left-biased and untrustworthy of the generally left-biased and untrustworthy “Fact Check” columns, but even acknowledging that, how can it ignore what may be Clinton’s most blatant and significant lie? The answer to that may be that the rest of the media has decided to ignore it too.

Yes, it’s that Benghazi lie again. On the night of the attack, Secretary of State Clinton sent an email to her daughter stating that several American “officers were killed in Benghazi by an Al Queda-like group.” The next morning, she sent message above to a top Egyptian diplomat. US officials ascertained “almost immediately,” according to the CIA director at the time, that the attack was not sparked by a YouTube video, but a planned terrorist attack.  At September 14, 2012  Andrews Air Force base ceremony, with the flag-draped coffins of the Benhgazi victims on display, Hillary Clinton told grieving family members that the online anti-Islam video was the cause, and that the video’s maker would be punished.  Four different relatives of three separate victims have publicly confirmed those conversations, including one who recorded what he heard at the meeting in handwritten notes. That was Tyrone Woods’ father, who has said, “I gave Hillary a hug and shook her hand. And she said ‘we are going to have the film maker arrested who was responsible for the death of your son.’” Sean Smith’s mother and uncle, and  Glen Doherty’s sister confirm similar statements made by Clinton to them.

Yet when Clinton was asked by George Stephanopoulos last Sunday if she told the family members that the film, not organized terrorists, was responsible for the attack, Hillary’s answer was “No.”

STEPHANOPOULOS: Did you tell them it was about the film? And what’s your response?

CLINTON:No. You know, look I understand the continuing grief at the loss that parents experienced with the loss of these four brave Americans. And I did testify, as you know, for 11 hours. And I answered all of these questions. Now, I can’t — I can’t help it the people think there has to be something else there. I said very clearly there had been a terrorist group, uh, that had taken responsibility on Facebook, um, between the time that, uh, I – you know, when I talked to my daughter, that was the latest information; we were, uh, giving it credibility. And then we learned the next day it wasn’t true. In fact, they retracted it. This was a fast-moving series of events in the fog of war and I think most Americans understand that.

Even Clinton’s words at the September 14 ceremony for those Benghazi victims strongly support the victim’s family members’ version of what Clinton told them. She said, “We’ve seen rage and violence directed at American embassies over an awful Internet video that we had nothing to do with.”

This is an important lie, far more important than, for example, Donald Trump’s nonsense about seeing “thousands upon thousands” of New Jersey Muslims celebrating on 9-11. Why has the news media shown a fraction of the interest in exposing it that it has in Trump?

A. The news media has decided that Clinton wasn’t lying at all. She is telling the truth, and the four family members are all Republicans trying to undermine her. After all, who are you going to believe: A former Secretary of State, U.S. Senator and First Lady with a sterling record of truthfulness, or four bitter Americans nobody ever heard of?

B. The news media already pronounced Clinton’s 11 hour Benghazi testimony a total triumph despite her admission that she wrote her daughter that the Benghazi attack was a terrorist effort immediately and later used the video cover story. It can’t start paying attention to Clinton’s dissembling on the topic now, and besides, we’ve “moved on.”

C. Clinton’s “fog of war” defense for saying different things to different people is completely reasonable, and raises no questions about her ability to lead in crisis.

D. Pursuing this lie would inevitably lead back to Barack Obama, whose re-election prospects were behind the effort to misrepresent the attack by framing its as irrelevant to Al Qaeda, since it  had supposed  been vanquished along with bin Laden. After all, administration spokesperson Susan Rice repeated the same fake video story on multiple networks national television the next day. The news media either won’t criticize Obama, or can’t bring itself to see him as corrupt as he is, or will do anything to avoid proving Republicans right.

E. They don’t care how much Clinton lies. They are part of her reelection campaign, “Democratic operatives with by-lines,” in Glenn Reynolds’ words. When ABC’s Stephanopoulos heard Clinton’s “No,” he just let the matter drop. (You would think he had ties to the Clintons of something.)

F. The news media don’t care about any lies by candidates and leaders, except to the extent that they can be used to undermine politicians journalists don’t’ like—like Donald Trump.

G. It’s just an innocent oversight…incompetence, not outrageous bias and complicity. Conservatives think everything is a conspiracy. Journalism’s a tough job, and nobody’s perfect.

Did I miss one?

NOTE: Yes, I know all of the cites below are to “right-wing” news sources. If the mainstream news media would cover the news and the campaign objectively and do its damn job, I’d have non-right wing sources. It is as if the interview on ABC didn’t happen, as far as CBS, CNN, NBC, the Washington Post, the New York Times, and even ABC is concerned. Only sites like Breitbart, Washington Free Beacon, various talks shows, Instapundit—have even mentioned it, the others apparently seeing nothing at all, move along. This is the game. I’m sick of it. Everybody should be sick of it.

12 thoughts on “Being Fair To The News Media: Is There An Ethical Explanation For Why Hillary’s “Most Repugnant Lie” Has Been Ignored?”