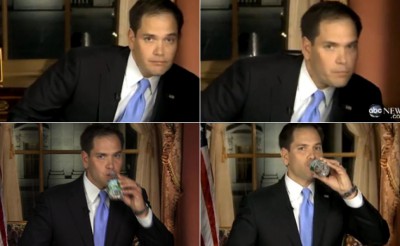 As it turned out, this told us everything we need to know…

Pundits, professors and even China are saying that the U.S. system of identifying qualified Presidential candidates doesn’t work or “is broken” because Donald Trump appears to have slipped through the net. But the occurrence of what Herman Kahn called “an unpredictable convergence of bad management and bad luck” only proves what Ethics Alarms has noted over and over again: no system, even the best, works all the time. I’ll post an article about all the people and circumstances that poked that hole in the Trump net once my nausea subsides, but in the meantime, I want to point out that the system worked perfectly with Marco Rubio. He wasn’t fit to be President, and the system exposed him brilliantly.

Rubio thought that he could follow the successful plan that put Barack Obama Barack Obama in the White House in 2008, despite similar deficiencies in experience. Like Obama, he was a young, fresh, minority candidate with a natural base, who projected intelligence and was an impressive speaker. The political and campaign processes, however, and his reaction to the stress of them, exposed his many flaws. The Obama plan wouldn’t be enough this time, in no small part because Marco Rubio is no Barack Obama:

1.  Rubio’s big unveiling to the nation came when he was given a national forum to rebut Barack Obama’s State of the Union speech in 2013. In a much ridiculed moment, Rubio had to pause to drink from a water bottle mid-speech, looking furtive and silly in the process. Sure, it was trivial, but it was also wildly unprofessional: the equivalent of an actor playing Hamlet pausing mid-soliloquy for a Dasani. It was, as it turned out, signature significance.

2. Like Obama, Rubio was often absent from Senate votes; unlike him, Rubio had an outrageous explanation when his opponents and the news media raised the issue. He hated the Senate, he said. That’s why he didn’t show up for work. Presidential candidates have to think about the consequences of their words and actions: why would Florida voters in the eventual Florida primary vote for an AWOL Senator who was collecting his salary while refusing to do the job they had elected him to do?  Sure enough, when he desperately needed their support, it wasn’t there.

3. Rubio, unlike Obama then and unlike Donald Trump now, was a lazy campaigner. He didn’t schedule many appearances, and was all but invisible on television. Americans want leaders who show the public they want to lead. Say what you want about Donald Trump, and I have said plenty, but he has worked for this nomination as hard as anyone I have ever seen. Even horrible candidates can display admirable qualities: with Hillary, it’s her resilience. Trump’s diligence and work ethic are impeccable. Rubio looked like a slacker by comparison. What good is being young when someone a quarter century older runs rings around you?

4. He collapsed under pressure. His “Robo-Marco” moment, when Chris Christie rattled him in the debate and all he could do was repeat the same canned phrase, was enough to disqualify Rubio all by itself. That’s the great benefit of the long campaign process, as annoying and repetitious as it is in other respects. Weaknesses can’t be hidden. Flaws are exposed. Sooner or later, Abe Lincoln is proven correct: you can’t fool all the people all the time.

5. As I pointed out, several fatal character flaws that disqualified Rubio for the Presidency surfaced in the telling incident after the Nevada Caucuses, where he wouldn’t face his supporters or cameras after a stinging defeat, and went to bed instead of taking advantage of an opportunity to rally his disheartened troops and give CNN some impressive clips to show Americans the next morning. This was lazy, cowardly and awful judgment, a rejection of the imperatives of leadership, and blatantly incompetent, showing a lack of basic leadership instincts.

6. Finally, when he appeared to be surging in the polls, though only because his competition was so repellent, Rubio made the decision to go “tit for tat” with Trump’s ad hominem attacks and vulgar rhetoric, making fun of the tycoon’s hair, fake tan, “little hands” and, ugh, presumed penis size. If that wasn’t bad enough, his delivery of the insults was atrocious, as he grinned and snickered while uttering these gutter attacks, looking like nothing so much as a smug 7th grader. With this, Rubio showed that he had as little dignity and respect for the office he was seeking as the disgusting boor people were turning to Rubio in order to reject. He showed that he lacked core values and integrity, and that his judgment, again, was terrible. At that point, Rubio’s support evaporated.

7. It is also important to note that the public does learn, though imperfectly and slowly. Rubio was too much like Obama to contrast himself with Obama. The public has just seen what can happen when an inexperienced, unqualified, ambitious minority politician gains power based on vague promises, group identity, and a silver tongue. Why would Rubio think he could simultaneously call attention to the failures of a President whose methods he was emulating and yet still persuade voters to make the same mistake twice? Moreover, Rubio, compared to Obama, looked inferior in every way. Obama is cool under stress; Rubio got thirsty, sweated, and babbled.

He wasn’t qualified. Rubio, absent a shocking transformation, would have been a disastrous President, and the process exposed that. The system worked perfectly.