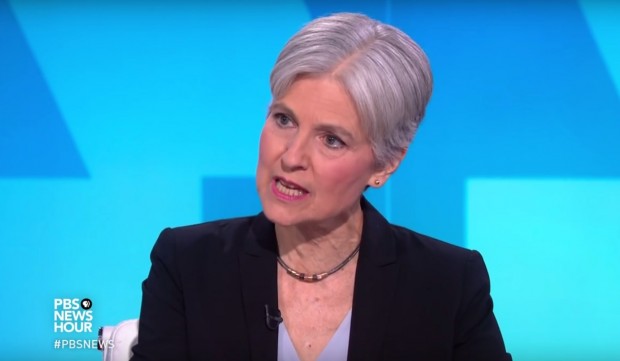 (To be fair, this photo should only show about 40% of Jill Stein’s face…)

Last week, PBS featured an interview with Green Party presidential candidate Jill Stein. It began as a live interview on Facebook, but what was broadcast on the PBS’s NewsHour was significantly different from the actual interview. Here. courtesy of Newsbusters, are Stein’s missing comments, in bold:

GREEN PARTY PRESIDENTIAL CANDIDATE JILL STEIN: I wouldn’t say there are no differences, but the differences are not enough to save your job, because Hillary Clinton, you know, and now her transition director Ken Salazar, y’know, they’re big proponents of the Trans-Pacific Partnership, which is basically NAFTA on steroids. And, uh, most observers believe that it will send our jobs overseas, as well as undermine American sovereignty by bringing in these international tribunals that get to pass judgment on our laws, on our public health protections, on our worker protections.

So we, you know, we can’t count on saving our jobs, saving our lives — 1 in 3 Americans now cannot afford health care under Obamacare — or saving the planet, because Hillary has been a big proponent of fracking, as is Ken Salazar, her transition director.

So we feel that in this election, we’re not just deciding what kind of a world we’re going to have, but whether we’re going to have a world or not going forward, and knowing that the majority of Americans is unhappy with these two party choices, this is the time for us to open up.

Americans have not only a right to vote, but a right to know who we can vote for.

So we’re pushing for opening up the debates, and then let’s see how the chips fall.

WOODRUFF: Dr. Jill Stein, with the Green Party. We thank you.

You can watch the unedited version of Stein’s answer on a PBS livestreamed Facebook clip, beginning after the 6:40 mark. On  the PBS website and on PBS’ YouTube clip, however, all you’ll find is the edited answer. Even if Woodruff says, “You can hear the entire interview at…,” it doesn’t undo the damage. When an interviewer says this, do you assume that the “entire interview” means “the internal sentences and paragraphs we cut out to completely misrepresent what the actual answers were”? I don’t. Why don’t I, by now? Boy, am I an idiot.

Idiot or not, I am still the victim of an ethics foul, and disgustingly so. If the NewsHour has to cut some of the interview for time, fine: cut a question and its answer, don’t distort the answers by cutting out the middle of them, and the parts which just happen to be critical of—SURPRISE!—Hillary Clinton. If PBS does this, it is also ethically obligated to tell viewers that it has cut her answers, and where they can find what she really said. It didn’t do this.

It is absolutely unethical to distort the answer to a question in an interview by redacting it like that, and the fact that the whole interview is available intact on another medium—one could only find Stein’s unedited answers on Facebook if one knew where to look even as one was being deceived on TV—is no defense, and no more of one more than if the unmanipulated interview could be found buried under a rock with a map to it available online.

I apologize for the high dudgeon, but how dare PBS do this? How dare a publicly funded news source so blatantly play Pravda for the party in the White House?

I would gladly, gleefully, gratefully pay tax money for an objective, trustworthy news source, even if it were a only an 8-page equivalent of the old Weekly Reader, because there is no such source currently, and being buffeted between the “now we hide the news, now we don’t”  liberal liars like the New York Times and the sexual harassing, misogynist, smugly homophobic, Donald Trump enabling creeps at Fox News is giving me hives. But to pay to be lied to “for my own good” like this? How dare they? (Don’t you dare tell me that it’s an insignificant amount, compared to all those other expenses. Don’t you dare. I shouldn’t have to pay one penny to be lied to by a government mouthpiece. )

Oh, it wasn’t intentional, I will be told. I bet I know who will write in to Ethics Alarms and argue that: here, I’m writing their names on a little piece of paper right now. They’ll also say it’s just a coincidence that only so-called “right-wing” news sources and websites—and one ethics site, this one, that would make exactly the same fuss if say, Fox did something like this (and also an ethics  site that no longer will quote or link to Breitbart because they DO stuff like this, all the time,  as right wingers bleat their praise for its “bravery”)–have reported on PBS’s miserable ethics in this episode. And to them I say: you should be ashamed of yourself, as you continue to make intellectually unsupportable arguments for why the thoroughly broke United States government, with crumbling roads and sewage pipes and unfunded entitlements should fund the Corporation for Public Broadcasting, especially when it can’t be trusted not to lie outright to bolster a candidate as corrupt as Hillary Clinton, when it should be helping to educate the public about perhaps less nauseating alternatives like Jill Stein (who appears to be an anti-vaxxer, also known as “a dangerously ignorant idiot,” so maybe she’s not all that much less nauseating after all, but PBS didn’t inform the public about THAT, either.)

Some of these names on my little piece of paper will also call this post a rant, to which I say, damn right it’s a rant. I resent American democracy being corrupted this way, and I really resent citizens who I know are smart enough to see it, allowing it to continue with their support because the corruption happens to benefit their pet causes.