Blogger-muckraker Glenn Greenwald reports today on leaked strategy e-mails from the Hillary Clinton campaign that show ongoing coordination between the campaign and journalists to advance her candidacy and place her in power. The natural defense of the Clinton Corrupted to this is predictable (“Everybody does it!), and because it impugns the integrity of the news media, I doubt that Greenwald’s findings will even be widely reported. As he writes in his conclusion,

“All presidential campaigns have their favorite reporters, try to plant stories they want published, and attempt in multiple ways to curry favor with journalists. These tactics are certainly not unique to the Clinton campaign…But these rituals and dynamics between political campaigns and the journalists who cover them are typically carried out in the dark, despite how significant they can be. These documents provide a valuable glimpse into that process.”

The glimpse shows a thoroughly unethical process whereby the Clinton campaign sets out to bias coverage, and unprofessional journalists allow them to do it. Then it is all kept secret, since allowing the public to know how “cozy” (to use Greenwald’s benign word–he is a progressive himself, after all) the relationship between journalists and those whom they claim to covering “objectively” really is would make it far more difficult for the news media to manipulate public opinion and warp democracy.

Among the revelations in Greenwald’s report

“The Clinton campaign likes to use glitzy, intimate, completely off-the-record parties between top campaign aides and leading media personalities. One of the most elaborately planned get-togethers was described in an April, 2015, memo — produced, according to the document metadata, by deputy press secretary Jesse Ferguson — to take place shortly before Clinton’s official announcement of her candidacy. The event was an April 10 cocktail party for leading news figures and top-level Clinton staff at the Upper East Side home of Clinton strategist Joel Benenson, a fully off-the-record gathering designed to impart the campaign’s messaging:

“Unfriendly” reporters and pundits were not invited. This is what is called “an appearance of impropriety.” Accepting gifts and favors, including parties, from those who a reporter is supposed to cover objectively is a conflict of interest, and should be disclosed. Of course it wasn’t.

2.Recruiting pundits the audience believes are giving objective opinions who are in fact coordinating with the campaign

“Pundits regularly featured on cable news programs were paid by the Clinton campaign without any disclosure when they appeared; several of them are included on this “surrogates” list, including Stephanie Cutter and Maria Cardona:

Why look! George Stephanopoulis is on a “friendly journalist” list. And…Charlie Rose! Dana Milbank! Washington Post editor Ruth Marcus! Wolf Blitzer! Funny, I thought these were professional journalists, not campaign insiders secretly advancing their candidate, and certainly not “friendly,” which by definition means “biased,” just like “hostile” does.

One January 2015 strategy document — designed to plant stories on Clinton’s decision-making process about whether to run for president — singled out reporter Maggie Haberman, then of Politico, now covering the election for the New York Times, as a “friendly journalist” who has “teed up” stories for them in the past and “never disappointed” them. Nick Merrill, the campaign press secretary, produced the memo, according to the document metadata: 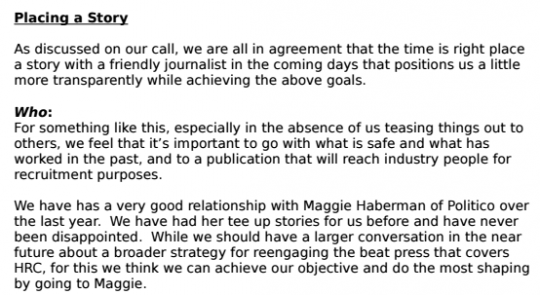 That strategy document plotted how Clinton aides could induce Haberman to write a story on the thoroughness and profound introspection involved in Clinton’s decision-making process. The following month, when she was at the Times, Haberman published two stories on Clinton’s vetting process; in this instance, Haberman’s stories were more sophisticated, nuanced, and even somewhat more critical than what the Clinton memo envisioned.

But they nonetheless accomplished the goal Clinton campaign aides wanted to fulfill of casting the appearance of transparency on Clinton’s vetting process in a way that made clear she was moving carefully but inexorably toward a presidential run.

Read the whole article. It tells us that the government in power is using  unprofessional, partisan, biased and complicit news media figures as its propaganda arm, deceiving and manipulating the public, and elections, in the process. The fact that in this particular ugly instance, the conspiracy will have a salutary effect by blocking the ascent of an even worse candidate than Hillary Clinton does not justify it, make the undermining of our democracy more acceptable, or render the threat to our freedom posed by  arrogant, unethical, conflicted journalists less of a threat.

27 thoughts on “Trump’s Tape Is Disgusting; This Is Much Scarier…Or Should Be”