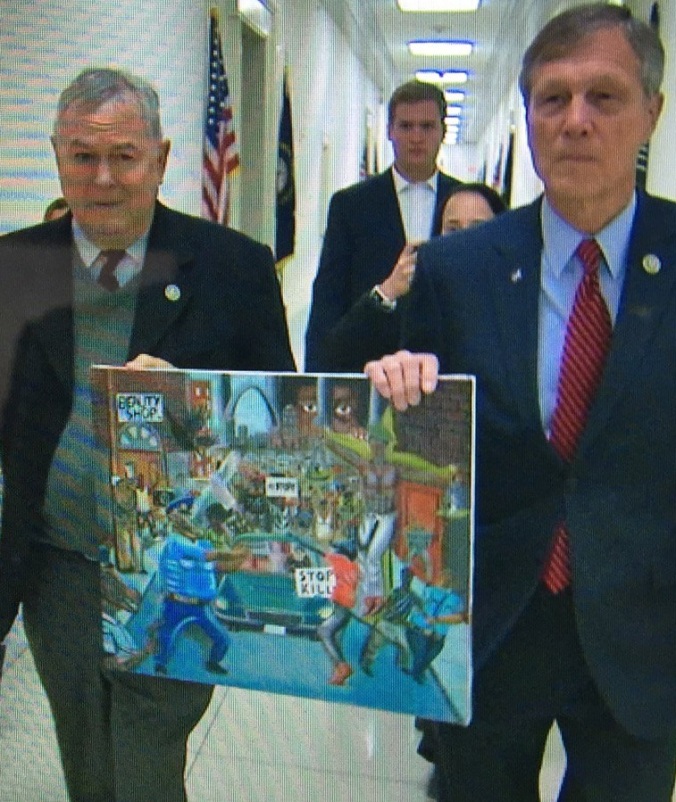 Well now we have a definitive answer to the Ethics Alarms Ethics Quiz that asked whether  it was responsible, fair, and ethical for Congressman Lacy Clay (D-Mo) to have the painting above displayed in the U.S. Capitol, and we don’t even have to use the ethics decision-making process I included in the post. (I note ruefully that readers were challenged to use the method to reach a conclusion, and none did.)

We don’t have to use it, because we now know some things we didn’t know at first, or at least I didn’t. Based on news reports when I first posted, I assumed that the work by high school senior David Pulphus was chosen by a designated committee, and that Clay was bound by the terms of the contest to hang the winning painting in the Capitol. That would have made the treatment of the obviously inflammatory artwork, which depicts the false Black Lives Matter narrative that Mike Brown was gunned down in Ferguson by a racist cop without cause, an ethics conflict, pitting the First Amendment and the obligation to fulfill  a commitment against the inclusion of racially divisive art in the Capitol, which is irresponsible.  Now we know, however, that Clay himself helped choose the painting, and that he did so despite the fact that the painting directly violated the rules of the contest, and thus was ineligible:

“While it is not the intent to censor any artwork, we do wish to avoid artwork that is  potentially inappropriate for display in this highly travelled area leading to the Capitol.Artwork must adhere to the policy of the House Office Building Commission. In accordance with this policy, exhibits depicting subjects of contemporary political controversy or a sensationalistic or gruesome nature are not allowed. It is necessary that all artwork be reviewed by the panel chaired by the Architect of the Capitol and any portion not in consonance with the Commission’s policy will be omitted from the exhibit. If an entrant is unsure  about whether a piece of artwork is acceptable, he or she should contact the staff of his or her  Member of  Congress; the congressional staff can speak with personnel who can determine whether the artwork would be accepted.”

The painting is beyond question  “depicting subjects of contemporary political controversy or a sensationalist or gruesome nature.” In allowing the painting to be entered, participating in selecting it, seeing that it was chosen as the winner, and hanging such an inflammatory work in the Capitol, Rep. Clay was…

2. Deliberately bolstering a false narrative regarding the results at Ferguson.

3. Exploiting a child for his own political agenda.

5. Undermining the contest itself.

There is no justification for doing any of this, unless he wants to be transparent about the fact that he isn’t fit to be in the House of representatives, and is a jerk besides.

Since the Ethics Quiz, matters have deteriorated considerably.

Republican Congressman Duncan Hunter (R-Cal.) read about the painting after learning about the protests of police groups, correctly concluded that it had no place in the Capitol, and in an evening raid, removed it.  Hunter told Fox News that “the Congressional Black Caucus (of which Clay is a member) now stands for portraying cops as pigs in the US Capitol.”

This was a fair and accurate assessment, and mysteriously at odds with President Obama’s definitive conclusion that race-relations have improved under his wise stewardship.

Clay, who earned himself an Ethics Alarms “Incompetent Elected Official of the Month, “ but is so much more than that, responded by threatening to sue Hunter, which is ridiculous, and accused him of theft, which is even more ridiculous.  Hunter returned the painting.  Clay, lying through his teeth, said that the painting “perhaps” might violate the art contest’s rules—he knows damn well it does—but said that the issue was really not about a student art competition anymore. It’s about defending the Constitution.” He is not only a liar and a toxic, irresponsible, race-baiting  elected representative, but Constitutionally ignorant as well. There  is no right to have your painting hung in the Capitol, especially when it didn’t qualify to be entered in the contest that put it there.

Clay decided to spark further controversy and hung the painting again….and it vanished again, this time thanks to Colorado Congressman Doug Lamborn (guess which party and what color he is). Lamborn dropped off the painting at Clay’s office, where, according to reports, Clay threatened to duke it out with the Republican. Clay then hung the painting a third time, and it was removed a third time. California House member Dana Rohrabacher told the news media that if Clay keeps the putting up the thing, “We’re going to keep taking it down,”

Finally doing the impossible and setting the low point (so far) of this perfect example of why Barack Obama, as he will tell you so himself, takes pride in how he has been a racial healer, the chairman of the Congressional Black Caucus,  Cedric Richmond (D-La) told Politico, “We may just have to kick somebody’s ass and stop them.”

That’s right: the leader of the Congressional Black Caucus is willing to resort to violence to ensure that a painting that depicts a police officers as a pig and that should not have been selected for display under the rules of the Congressional Art Competition continues to hang in the Capitol, perhaps as a symbol of how much progress race relations have made under B…all right, I guess I’ve flogged that one enough.

This was intentional deceit by NPR, and one more example of the left-wing media blocking for its allies. The painting portarayed the central police figure in the painting as a pig. Since the late Sixties, “pig” has been used as a hostile epithet to demean police. NPR knows it, knows that the kind of animal used by the artist is material to understanding the story, and deliberately used a misleading headline.

UPDATE (1/14/17): The Architect of the Capitol finally figured out that the painting wasn’t compliant with the rules, and will be taking it down. If he had done his job in a timely fashion, we wouldn’t have had House members threatening to beat up each other.

111 thoughts on “Ethics Quiz Follow-Up (And An Ugly One): The Congressional Art Competition Winner’s Painting [UPDATED]”