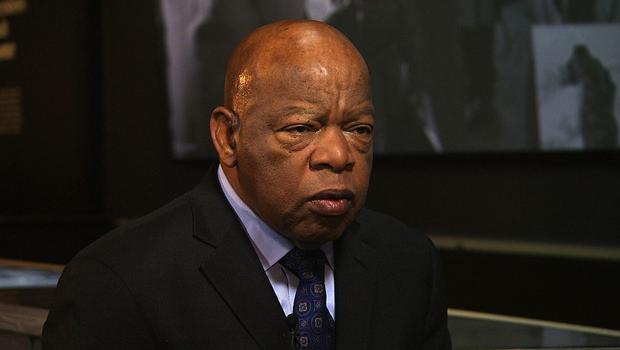 Yesterday, Rep. John Lewis told NBC audiences that Donald J. Trump, duly elected, legally and without question, was “an illegitimate President.” This was an unprecedented act of vicious partisanship and unethical public service. Worse, Lewis’s statement was intentionally racially divisive, timed to appear the day before Martin Luther King Day, and less than a week before the Inauguration. Imagine the bipartisan fury that a similar pronouncement by a white Congressman would have (justly) attracted in January, 2009. But double standards are “in” this year, if you are a progressive, a Democrat, or just someone who wants to weaken the United States of America and make certain that the recent election results in a calamity.

Lewis, as he has much of his tenure in the House, was relying on his status as a civil rights icon 60 years ago to immunize him from the consequences of his actions. In other words, he was depending on  Rationalization #11, The King’s Pass, that particularly corrosive rationalization—it is also called “The Star Syndrome”— which holds that distinguished figures who should be role models must be allowed to get away with conduct that anyone less prominent would be punished for. The King’s Pass wrecks companies and sports teams, allows sexual predator Presidents to get away with lying under oath, and is one of the many reasons the world doesn’t work very well. In addition to showing that “laws are for the little people,” abusers of status like Lewis  stand for the proposition that ethics are just for little people too.

Martin Luther King’s associates and lieutenants have been particularly prolific in exploiting The King’s Pass. Jesse Jackson proved himself to be a venal race hustler, but was insulated from the criticism he deserved by virtue of his civil rights era bona fides. Worse yet was the late Marion Barry, a cynical and corrupt mayor of Washington, D.C., whose loyal African American supporters treated him as if he could do no wrong. Police arresting him for smoking crack the same week he lectured schoolchildren on the evils of drugs was widely condemned by his supporters as racially motivated.

Our juvenile and impulsive President-Elect, sadly but predictably, reacted to Lewis’s irresponsible attack by tweeting a “shut up and do your job” response. “He’s a counter-puncher, ” explained Corey Lewandowski , the ex-Trump campaign manager who virtually counter-punched a reporter when she tried to ask the candidate a question at a rally. No, he’s a fool, but Trump’s unpresidential tweeting doesn’t excuse or validate Lewis’s conduct. “Fury Builds as Civil Rights Icon Is Denigrated”  headlines today’s Times, growing more biased and inflammatory by the day. Lewis was intentionally trying to spark fury as well as partisan and racial division, and he earned that denigration, because it was unpatriotic, unstatesmanlike, and willfully destructive.

It only seems less so because so many in Lewis’s party are behaving almost as poorly.

If one has any doubt how wrong Lewis is, all that is required is a critical reading of his defenders. Times columnist Paul Krugman was in typical form this morning, with an essay  full of logical flaws, deceitful phrasing and biased analysis so flagrant they would punch the ticket of a less famous pundit. (Krugman, like Lewis, relies on the King’s Pass too.)

He begins his whitewash of Lewis’s disgraceful attempt to prompt active resistance to the transfer of power by the usual litany of Lewis’s past:

As a young man, Congressman John Lewis, who represents most of Atlanta, literally put his life on the line in pursuit of justice. As a key civil rights leader, he endured multiple beatings. Most famously, he led the demonstration that came to be known as Bloody Sunday, suffering a fractured skull at the hands of state troopers. Public outrage over that day’s violence helped lead to the enactment of the Voting Rights Act.

Yes, and so what? As an old man, he is scarring his legacy by behaving as a racially-divisive ass. What is Krugman saying? He is saying that past good works excuse current destructive ones., or worse, that we should give destructive and unethical conduct a presumption of virtue. In truth, Krugman believes that any attack on any Republican carries the presumption of virtue.

Next, Krugman moves on to justifying Lewis’s conduct on the merits, of which there are none. There is no excuse, ever, for an elected official of the United States to try to destabilize the government, cause citizens to question elections, and stoke national distrust. This is the Times, remember, so the paper’s infamous mid-campaign assertion that Donald Trump’s existence constitutes a reason to suspend ethics applies:

Let’s ask whether Mr. Lewis was right to say what he said. Is it O.K., morally and politically, to declare the man about to move into the White House illegitimate? Yes, it is. In fact, it’s an act of patriotism.

Now Krugman gives full rein to his skill at unethical analysis. In the interest of time, I’ll just flag the junk and nonsense as they arise:

By any reasonable standard, the 2016 election was deeply tainted. It wasn’t just the effects of Russian intervention on Mr. Trump’s behalf;

That a lie. Russia did not “intervene in the election on Mr. Trump’s behalf.”  Russia facilitated the access of useful information  about the corruption within the Clinton campaign and by the candidate herself to the public via the news media, including Krugman’s own paper. There is no evidence that this altered a single state’s choice for President, and if it did, it was genuine information that the public had a right to know that changed votes, not Russia.

Hillary Clinton would almost surely have won if the F.B.I. hadn’t conveyed the false impression that it had damaging new information about her, just days before the vote. This was grotesque, delegitimizing malfeasance, especially in contrast with the agency’s refusal to discuss the Russia connection.

Krugman, an economist who should know better, thus endorses the convenient post hoc ergo propter hoc arguments that the Clinton camp has pushed to excuse its own failures. First, the fact that a legitimate, ethically mandatory act (which Comey’s letter was) may have or even did affect the vote totals doesn’t make the election “tainted.” This was a sequence of events flowing directly from Clinton’s unethical handling of her e-mail at State and her subsequent endless lying about it. Any votes Clinton lost because of her e-mail machinations were her own fault.

Second, for Comey’s letter to have “tainted the election” would require it to have been sent in order to affect the election by hurting Clinton. There is no reason to think that was the case, and it is certainly dishonest to assert it is the case.  If Comey had wanted to help Trump, he could have recommended that Clinton be indicted in July, a decision that would have been reasonable and difficult to deny. As it was, his decision not to prosecute was one that Republicans argued was based on illicit partisan favoritism for Clinton.

Finally, and I seem to be one of the few who have pointed this out, the hysterical reaction by Clinton and Democrats to the Comey letter was so furious  that it made Clinton look like she had something to hide. All she had to say was that Comey was doing his job, that the FBI had already determined that no laws were broken and that Hillary was confident that the new e-mails wouldn’t alter that assessment. Clinton’s handling of every aspect of the e-mail controversy harmed her candidacy, and justly so. She turned the Comey letter into another self-inflicted wound.

Was there even more to it? Did the Trump campaign actively coordinate with a foreign power? Did a cabal within the F.B.I. deliberately slow-walk investigations into that possibility? Are the lurid tales about adventures in Moscow true? We don’t know, although Mr. Trump’s creepy obsequiousness to Vladimir Putin makes it hard to dismiss these allegations. Even given what we do know, however, no previous U.S. president-elect has had less right to the title. So why shouldn’t we question his legitimacy?

No previous President has had more right to the title, since Trump received the votes to win him an overwhelming victory in the Electoral College. How does Krugman reach the conclusion that Trump has less right to an office he was unquestionably elected to than any single President, much less all of them? Simple: Krugman doesn’t like Trump, so that’s enough. Fairness suspended by order of  Rationalization #31. The Troublesome Luxury: “Ethics is a luxury we can’t afford right now”, aka. “The New York Times Rule.” In truth, several Presidents have arguably had less “right” to the title than Trump: John Quincy Adams, Rutherford B. Hayes, Gerald Ford, and George W. Bush.

More about that later today, but back to Krugman:

“It would be one thing if the incoming commander in chief showed any hint of humility, of realizing that his duty to the nation requires showing some respect for the strong majority of Americans who voted against him despite Russian meddling and the F.B.I.’s disinformation dump. But he hasn’t and won’t.”

After eight years of Barack Obama, it takes magnificent gall to suggest that lack of humility justifies a verdict of Presidential illegitimacy. It take more gall for a prominent member of “the strong majority of Americans who voted against him” (note the classic Krugman deceit: that “strong majority” is reached by including third, fourth and fifth party candidates) to make the argument that Trump should show special respect for a group that has shown less respect for him than any opposition voters have for a President-Elect since the Confederacy fired on Fort Sumter.

“…And he’s surrounding himself with people who share his contempt for everything that is best in America. What we’re looking at, all too obviously, is an American kakistocracy — rule by the worst.”

They are “the worst” because Paul Krugman says so, and thus Donald Trump’s election shouldn’t count. What Donald Trump and his cabinet stand for include core American values, and the position that what he has stood against are what is “best about America” is an opinion that Krugman doesn’t have the integrity to back up with specifics, for then he could be challenged.

“What this means is that Mr. Trump must not be treated with personal deference simply because of the position he has managed to seize”

This is despicable, and absent its richness as unethical punditry, would cause me to stop reading under normal circumstances. Krugman, the cur, is deliberately injecting the lie, and it is a lie, that Trump “seized” the Presidency. If he had seized it, Lewis’s attack and Krugman’s defense of it would not be the unpatriotic, un-American and dangerous statements they are. A seized Presidency is illegitimate. It is the Democrats who have been trying to seize the Presidency since November 8. Donald Trump was elected.  He was awarded the Presidency through the democratic process.

“He must not be granted the use of the White House as a bully pulpit. He must not be allowed to cloak himself in the majesty of office. Given what we know about this guy’s character, it’s all too clear that granting him unearned respect will just empower him to behave badly.”

What else is this but a call to overthrow the President of the United States?

Luckily, no prior heroism gives Krugman a plausible King’s Pass to hide behind: he is one of the most irresponsible and hateful hyper-partisan pundits given a forum in a major U.S. daily. Yet he is no worse than John Lewis, a U.S. Congressman who is willing to undermine the government and Constitution he is sworn to protect.