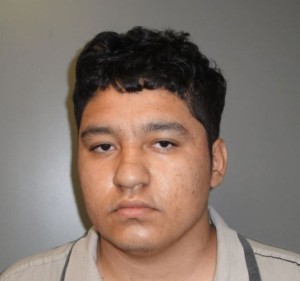 None of my captions for this photo of Oliver Funes-Machado are in good taste. Pass.

I don’t know about you, but I’m thoroughly sick of the daily media stories about the hardship of illegal immigrant families being “torn apart” when a parenty finally is held accountable for breaching our borders and breaking U.S. laws. Here is a refreshing story about a likely deportation that everyone can get behind.

ICE officials in North Carolina confirmed that Oliver Funes-Machado is an illegal immigrant, and I bet the news media makes sure the “illegal” is included when reporting on his case, if they do.  The 18-year old has been charged with cutting off his mother’s head with a butcher knife.

This is unethical, by the way.

Originally from Honduras, Oliver is accused of repeatedly stabbing his 35-year-old mother before beheading her. He then walked outside, holding her head in one hand and the knife in the other, as he waited for Franklin County deputies to arrive. He  called 911 to report the crime, just like a good citizen should .

Well, that’s a mitigation, I guess.

The teen told the 911 dispatcher that he killed his mother “because I felt like it.”

I don’t think Honduras is sending us their best people.

I’m sure he is a Dreamer, but I still think he should be deported.

30 thoughts on “Boy, I Bet That Cruel, Xenophobic, Trump Administration Will Deport This Poor Kid…”