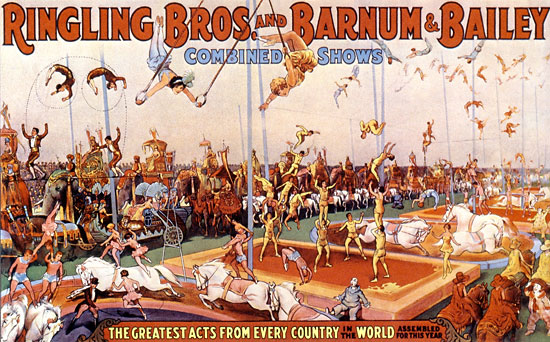 The Ringling Brothers Barnum and Bailey Circus will bring down its metaphorical Big Top for the final time in May. Its business model simply does not work any more, as an executive of the arena entertainment company that owns it said recently—especially since the circus capitulated to animal rights activists and fired its performing elephants. (Ticket sales dropped by almost a third.) This was an iconic cultural institution vanishing, so I had to say farewell, and did so last weekend, when the circus came to Washington, D.C. for the final time.

1. It is still an entertaining show, even though  the Ringling brothers would never have recognized it as a circus. Several of the acts were worth the ticket price (in our cases, about 75 bucks) all by themselves.

2. The Verizon Center was about a third filled for the final show of the legendary Ringling Brothers Barnum and Bailey Circus. The Center itself was sparsely staffed; it took 20 minutes in line to buy popcorn. Americans, as a group, don’t care about history, culture and significant changes in it landscape any more. The circus and its components gave us imagery, lore, metaphors—“walking a tight rope,” “three ring circus,” (this one is now a two-and-a half ring circus at best), “ringmaster,” “dog and pony show,” “the big tent,” “side-shows,” “clown act,” —and “The Man on the Flying Trapeze.” The nation is a little poorer and less colorful without it.

4. Assisting in the death of this experience is the trend of making sure all arena and stadium events  are filled with loud, never-ending, pounding electronic music that would make Phil Specter grab ear plugs. Once,  the circus’s dramatic  music consisted of drum rolls, bands and soft calliopes. If you watch the Cecil B. DeMille movie “The Greatest Show On Earth,” you will see spectators talking to each other during the acts, or shouting out to performers. Either is virtually impossible now. Conversation consists of screaming a few words repeatedly until your companion nods. This continues the cultural trend of making meaningful interaction with fellow human beings passe. How can this possibly be a healthy development for society?

I did see a lot of people texting….maybe to those sitting next to them.

5. Almost no venders were walking among the seated. A single snow cone from one of these cost $12.00.

6. This is how unintended cultural pollution takes place. The conglomerate that owns the circus also owns various ice shows, like Disney on Ice. To cut costs, it decided to employ performers from the ice shows in the circus too, meaning that instead of a sawdust path around the rings, the track around the performing areas are ice. Everyone is on skates half the time. It isn’t a bad effect: it’s faster than the old-style parades. But now the circus is an ice show.

7. The last time I saw The Ringling Brothers Barnum and Bailey Circus was when I was 10, when my dad took me and I watched the show using his liberated high-powered Nazi field glasses, with the little swastikas on them. We received lots of interest in the glasses, since people could actually talk to us. Nobody assumed we were Nazis. Anyway, I can hardly complain about the death of the circus due to public disinterest. I didn’t help. At least I did take my kid to see the circus. He’s 22.

8. He also had a useful and depressing observation. He said that nothing he saw could impress him very much, because he had seen equivalents on TV or YouTube many times before. True, he hadn’t seen them live and up close, but still: electronic media is  robbing  humanity of the capacity for wonder.

9. I can’t really argue against the elephant ban. Though the circus had greatly cleaned up its formerly deplorable treatment of the beasts, there was no way to house and travel with them humanely. The same is true of the big cats, but boy, watching the classic animal trainer act, with 14 lions and tigers, was thrilling. How will humans ever again see these beautiful animals active and uncaged? Why will they care about preventing their extinction if they are only abstract images and videos from now on? Zoos and circuses represent a utilitarian trade-off, and society’s assessment of the right balance has changed dramatically, and for circuses, fatally. Zoos may be next.

10. A stark lesson in cognitive dissonance: The Ringling Brothers Barnum and Bailey Circus, which for decades used head clown Lou Jacobs as its symbol, 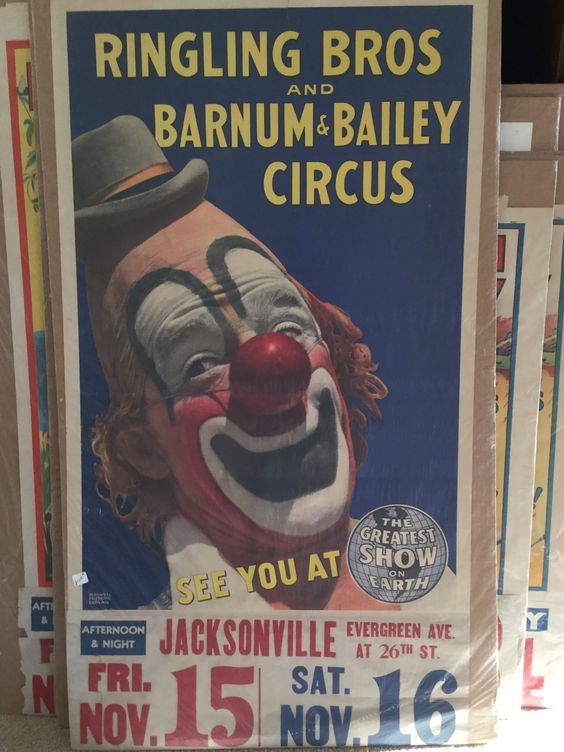 ..now minimizes the visibility of clowns to the vanishing point. The clowns are a small troupe, and act like rodeo clowns. The costuming and props are minimal. There is no little car, no extended clown skits. Moreover, Lou Jacobs’ style of clown, the classic whiteface clown, is gone. So is the Emmet Kelly-style “tramp” clown, presumably because it is politically incorrect. All that are left are the “auguste clowns,” like these… 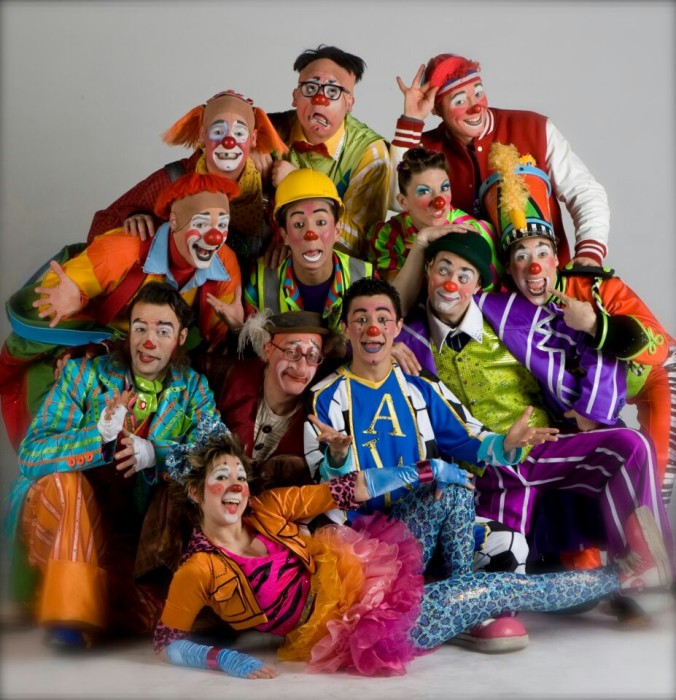 This is how the cognitive dissonance scale works: whiteface clowns can’t be funny, because the associations with them are now sinister. I grew up with whiteface clowns like Bozo, Ronald McDonald, Lou Jacobs, and Clarabell the Clown on “Howdy Doody.” Then came John Wayne Gacy, the real life serial killer clown, and Tim Curry’s terrifying Pennywise in “It.” Adults, like “Seinfeld’s  Kramer, displaying fear of clowns became a running gag, and kids got the message.

Result: Send off the clowns.

11. Few clowns, no elephants, ice instead of sawdust--at what point does the circus cease being a circus? It’s like the Tin Man. He kept chopping off parts of his body, and they were replaced by tin. At some point, he’s not human any more.

12. Someone messed up the kids-adult balance in the Greatest Show on Earth by deciding to frame what is essentially a vaudeville revue within an idiotic story featuring the Ringmaster battling an evil Space Queen named Tatiana across the galaxy for captured circus acts. This involved garishly lit spaceships sliding around the ice, some nonsense about a magic telescope, and various pyrotechnics, terrible acting and a predictable climax where the evil Tatiana decides to join forces with the Ringmaster, be Good, and create the GREATEST SHOW IN THE UNIVERSE!—which will go out of business in a month. I’m sure this was riveting to, say, the five-year olds, but the vast majority of the spectators were not five.

13. Another bad choice: the elephants were replaced by a pathetic petting zoo act featuring two donkeys, two alpacas, two goats and two llamas, who were all too dumb to do much of anything. All this did is point up what had been lost.

Circuses still survive elsewhere, especially in Mexico and Europe,  though the pompous, New Age Cirque du Soliel shouldn’t count. The U.S., however, has lost its biggest, most famous, definitive circus. which, based on what I saw last weekend, had been lost already. It is a lesson in how traditions and institutions that we assume are strong and will last forever can vanish, casualties of random, unrelated factors, changes in the culture elsewhere, apathy, bad decisions, bad luck, and perhaps most of all, because those entrusted with keeping those traditions and institutions healthy forget why they are important and worth preserving.

It is  a frightening lesson, a widely applicable one, and we ignore it at our peril.