I considered giving Hillary her well-earned Worst Presidential Election Loser award after her embarrassing Commencement speech at Wellesley, but the wag who wrote “Why did Hillary dress up like Monica Lewinsky at Wellesley? to accompany this photo… 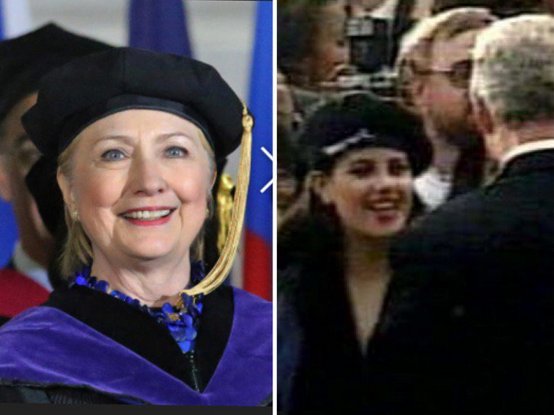 …made me laugh, and in my lightened state decided, “Nah! Why bother? Leave the poor woman alone.”

For I do feel sorry for Hillary Clinton. I feel sorry for anyone who loses the Presidency despite winning the popular vote. I would think it could drive someone crazy. In the play “Inherit the Wind,” there is a scene in which the wife of Matthew Harrison Brady (a thinly-disguised fictional avatar for three time Presidential loser William Jennings Bryan) begs for sympathy for her blow-hard husband, asking a critic to imagine what it must be like to have a Presidential election victory speech written and in his pocket three separate times and to never get to deliver it. Well, knowing you received the most votes and still can’t give the speech has to be much, much worse.

So now I have to review Hillary’s revolting and self-indicting Blame Everyone tour. Let’s begin by stating that no defeated Presidential candidate has ever done anything like this before, not even Richard Nixon. Nixon’s poor loser meltdown was after he lost the California Governor’s race in 1962. When he lost to Kennedy in 1960, his conduct was exemplary, refusing to demand a recount even when there was evidence, as there frequently was with the Kennedys, of shady operations. For a loser to engage in repeated recriminations and bitter pronouncements less than a year after losing is unprecedented. It is also —and forgive me for repeating myself from prior posts–disgusting, despicable and shameful for a defeated candidate to join a “resistance” against the lawfully elected winner. This is especially true in Clinton’s case, when she furiously condemned candidate Trump for suggesting that he might not accept his defeat.

In an interview in New York Magazine last month, Hillary repeatedly claimed that she “won.” As an amused Donald Rumsfeld countered the ladies of “The View” last week when they made the same claim, “What counts?” Uh, well, the Electoral votes count, Whoopie and Friends admitted. “That’s what I thought,” Rumsfeld smiled. Hillary, who at Wellesley claimed to be the herald of truth in an age of lies, keeps saying she won. It’s a Big Lie. Worse, it’s a Big Lie designed to keep alive the narrative that Donald Trump is not a “legitimate President.” He is exactly as legitimate a President as John Quincy Adams, Rutherford B. Hayes, Benjamin Harrison and George W. Bush, and indeed all the rest. He won. Hillary lost, and is now lying about it.

Incredibly, she also told the magazine that the news media was biased against her. “Look, we have an advocacy press on the right that has done a really good job for the last 25 years,” Clinton said. “They have a mission. They use the rights given to them under the First Amendment to advocate a set of policies that are in their interests, their commercial, corporate, religious interests. Because the advocacy media occupies the right, and the center needs to be focused on providing as accurate information as possible. Not both-sides-ism and not false equivalency.”

That’s right, she really called The New York Times, the Washington Post, CBS, ABC, CNN and NBC “the center.” She really has the chutzpah to argue that the media didn’t work hard enough to elect her and stop Trump, when its unethical efforts to do just that have triggered a catastrophic diminished in the public’s regard for journalism.

Then Hillary endorsed a fantasy conspiracy theory that “voter suppression” had stolen her victory. Clinton claimed that “what I was doing was working. I would have won had I not been subjected to the unprecedented attacks by Comey and the Russians, aided and abetted by the suppression of the vote, particularly in Wisconsin.”

Never mind that Clinton  didn’t deign to campaign in Wisconsin once during her general election campaign, and ran almost no campaign ads until shortly before the election. It was those racist Republicans that stopped loyal Democrats from stepping up. Hillary was channeling the largest pro-Clinton super PAC during the 2016 election, Priorities USA, which had recently released an analysis of voter turnout that claimed voter suppression had a “significant impact” on the electoral outcome. Even reliable Hillary boosters as Snopes to and Vox rejected the claim. Vox:

Okay, but what about the states that did pass new voting restrictions — like Ohio, North Carolina, and Wisconsin? To evaluate that, we have to look at the research on voting restrictions, which suggests that these don’t have as big of an effect as you might think.

Wisconsin, which was the closest contest of these three states on Election Day, has the most compelling case. As Ari Berman wrote for the Nation, “27,000 votes currently separate Trump and Clinton in Wisconsin, where 300,000 registered voters, according to a federal court, lacked strict forms of voter ID.”

So were 300,000 Clinton supporters really turned off from voting by the state’s voter ID law? Not quite. As Nate Cohn previously explained for the New York Times, chances are most of these people weren’t going to vote in the first place:

Essentially, the number of voters who don’t actually have an eligible ID is very inflated by estimates like Wisconsin’s. And assuming that these people will vote in the first place is a big mistake — they’re less likely to vote, with or without a voter ID law.

There’s no question that voter ID has a disparate impact on Democratic-leaning groups — those young, nonwhite, poor, immobile or elderly voters. The unmatched North Carolina voters were registered as Democrats by a 37-point margin, compared with the 12-point Democratic margin statewide. They were 46 percent nonwhite, compared with 29 percent of all registered voters.

But 22 percent of these voters were registered Republicans. The voters without an identification might be breaking something more like 70/30 for Democrats than 95/5.

As Cohn writes, a 70-30 skew is still a big loss for Democrats. But when taking into account that many of these people are unlikely to vote in the first place, the total count of lost voters is much smaller than one would think.

The Government Accountability Office (GAO), for example, concluded that a majority of studies it reviewed found no or even increased turnout after voter ID measures passed:

If you average the results from these studies, it appears that voter ID reduced turnout by around 0 to 1 percentage points. And not all of this reduced turnout is Democrats — as Cohn noted, it’s probably safe to assume around 70 percent were.

In fact, none of the other voting restrictions enacted by states seem to have much of an effect on voting either. Researchers have found, for example, mixed effects on whether more early voting increases turnout, with one recent study finding that early voting actually decreased turnout on net if voters couldn’t register to vote and cast their ballot on the same day. And in terms of long lines due to polling place closures, other studies estimated that previous experiences with long lines decreased turnout by only a fraction of a percentage point in 2014 compared to 2012.

Keeping that in mind, let’s look at the swing states that had new voting restrictions in time for 2016: Ohio, North Carolina, and Wisconsin.

In Ohio, lawmakers cut one week of early voting, keeping about four weeks of early voting in place. Clinton lost that state to Trump by 8.6 points — way more than one would expect a 0 to 1 percentage point decrease in turnout to cause.

In North Carolina, lawmakers cut voting sites for early voting and Election Day, but they never managed to implement broader restrictions they passed (including voter ID and early voting cuts) after a court struck those measures down. Clinton lost the state by 3.8 points — again, more than a 0 to 1 percentage point decrease in voter turnout would likely cause.

In Wisconsin, Clinton supporters again have the most compelling case. Clinton lost Wisconsin by 1 percentage point, which could definitely fall in the realm of reduced turnout from voting restrictions. But that’s only if you assume the maximum effect that voter suppression can have.

Plus, Clinton could have won Wisconsin and still lost the election. Once she lost Florida, Ohio, Michigan, North Carolina, and Pennsylvania, it was over. There was no way she could make up for the Electoral College deficit.

These facts matter: If Clinton didn’t lose because of voter suppression, she obviously lost for other reasons. Figuring out those other reasons will be necessary if Democrats hope to prevent another shocking loss like Clinton’s in the future.

Ah, but why bother with statistics, analysis and facts when Truth-Teller Hillary proclaims that voter ID laws kept her out of the White house?

23 thoughts on “Ethics Verdict: Hillary Clinton Is The Worst Loser In US Presidential History (PART I)”