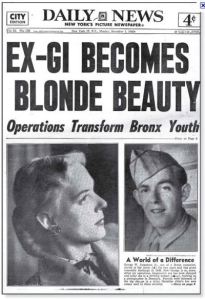 How to construct public policy regarding trans individuals is an increasingly varied and controversial ethics controversy (with another Ethics Alarms post on the topic in progress). This another whiplash ethics area where events and attitudes are moving and evolving too fast for some reasonable people to process. I remember as a child reading a vintage Readers Digest article about Christine Jorgensen and having my father answer my questions about her by saying, “He’s a freak.” The dialogue on the related issues here at Ethics Alarms is always  enlightening, in part because we have the benefit of some very well-informed authorities on the topic.

Pennagain added this impressive post to the latest round in the debate, in response to another commenter’s opinion. Here is Pennagain’s Comment of the Day on the post, “From The Law vs. Ethics File: The Discriminatory Charlotte Pride Parade”:

As far as I could find, the conclusion of Scientific American’s January 2016 article, “Is There Something Unique About the Transgender Brain,” speaks to the results of the all the legitimate studies that have been done to date: . . . given the variety of transgender people and the variation in the brains of men and women generally, it will be a long time, if ever, before a doctor can do a brain scan on a child and say, “Yes, this child is trans.”

So far,  so good. Nothing is proven either way as far as brain differentiation is concerned. But your personal observations are not at that level of science; they are your unsupported (and insupportable) opinions. The problem with that kind of observation is that it can easily be turned on its head, as with “Direct observations by my family, from many teachers and administrators: kids who want attention (for various reasons) tend to come out as trans.”

It’s rather: “Kids who are trans or gay tend to stand out and naturally attract attention.” What’s more, those who observe with knowledge can tell the difference easily.

What’s happening here is a common confusion between sexual orientation and gender identity. As simply as I can put it:

“Gay,” “Lesbian” and “Bisexual” refer to sexual orientation, in other words – who you are attracted to, namely, people of the same gender.

“Transgender” is a gender Identity: how you identify yourself in terms of maleness or femaleness. For a transgender person, the gender identity is one that is different from your biological sex. It can, in fact, have nothing whatsoever to do with whom you are attracted to.

Part of the confusion is that being queer (the word being back in vogue, stuck onto the LGBT as Q) designates one whose gender is known as fluid. In other words, the “stand outs” on the playground and even throughout their lives are those whose behavior is often that of the “opposite” gender. This occurs for two reasons: one is to be born with characteristics of another norm, the other is acquired as a copycat of society in general. What you don’t see,are those boys and girls, men and women, who are identical — naturally, biologically — with “straight” males or females… who can and do “pass”, as it were. Whether they look to you to be butch or femme, they are at home with their penis or vagina.

To get back to the question ‘What is the Difference between Gay and Transgender?’ – one has to do with sexual orientation (who you are attracted to sexually) and the other has to do with gender identity (who you feel yourself to be). Got it?

You are correct in thinking that transgender people, especially when in the (often difficult and painful) process of what is called coming out, used to identify as “gay,” because it was as close as they could come. But they had and have that one differentiation: the conviction and discomfort of being in the wrong gendered body. When a transgender person completes transition, he or she may turn out to have a straight orientation. Or not.

As far as your after finding that society no longer views them as special, have settled back into traditional sexuality goes, you display once again a conventional imagination in an attempt to dismiss both the reality of sexual orientation or gender identity and the complexity and difficulty of coming out against a society — a society that includes your own loved and needed ones — that hates, despises and rejects you. If you really believe this is an attention-getting pose, you are … ill-informed and unable to identify much less re-form your prejudices.

In short ‘What is the Difference between Gay and Transgender?”: One has to do with sexual orientation (who you are attracted to sexually) and the other has to do with gender identity (who you feel yourself to be).

An LBGT or Q person has rarely been “settled” in “traditional society.” They just learned, like you, to follow its customs, to date, even to marry and to raise children per standard. Throughout history, this has been a norm — to hide, to live a lie. (People sacrifice essential parts of themselves to live like this for many reasons when fitting in is deemed desirable or necessary enough.) Very often they are comfortable as Bi individuals in unconventional households. There are more than you know; they live a second life, usually undercover.

Speaking of personal observations, I recently met three people who came out in their 70s, retired, grandparents several times over. Two gay men, one lesbian. They have found a large support group of similar folks online who had felt obligated to be what their parents and/or church wanted.

And there are indeed some “exes,” a small minority. And among them are the rare but tragic cases who were exposed to unethical forms of persuasion that went against their natures. There are also those transgender folks who, in spite of their earnest desires, were incapable of going through the process of transition, particularly male to female. The hormone therapy alone can be torturous (it will be lifelong)… and to spare you the details, just know that the rest of it takes many years of many surgeries and and (again, often lifelong) psychological help. Many will spend a lifetime paying, literally, for it all.

By the way, “a surprising chunk of this demographic,” — LBG and T — have sired or borne children in a variety of ways, including the Traditional Way, and they have been raising “normal” families since long before their marriages became legal.

In short, to deviate from a majority is not to be a “deviant.” Being transgender or any other variation of “queer” is not part of your invented and exceedingly stale stereotype. You present a simplistic, demeaning, and (to be polite) unknowing view of a population that is dispersed widely within what your think is Your World. No one is forcing you to or even asking you to accept it; just recognize its existence and leave it be unless, Heavens to Betsy, it tries to jump your bones.

42 thoughts on “Comment of the Day: “From The Law vs. Ethics File: The Discriminatory Charlotte Pride Parade””