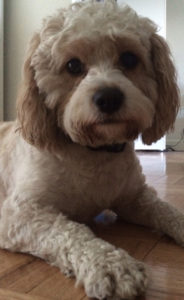 This is a fascinating example of the legal community’s incomprehensible standards regarding who is and who isn’t fit to practice law.

An autopsy revealed that Snoopy  had nine broken ribs, a crushed kidney and massive internal bleeding, all at the hands of Pastor.

In disbarring Pastor, [ Matter of Pastor, 2017 NY Slip Op 06729, (App. Div. 1st Dept. Sep. 28, 2017)], the court noted that the sentencing judge’s comments that the respondent’s conduct “‘showed almost incomprehensible violence, and malice,’ that the dog was in ‘excruciating pain’ up until she lost consciousness while respondent ‘sat down at his computer in the most cold-blooded manner, and went to work, knowing that the dog lay dying, . . . on the floor behind him.’”

But what does it have to do with whether the creep is a competent, honest, trustworthy lawyer?

Again I note that John Edwards never faced discipline for his massive deceptions and machinations, while his wife was dying of cancer, and while he was running for President. This conduct directly implicated trust and character, yet the refrain of Edwards’ colleagues was that his deceptions and cruelty, while clearly unconscionable, did not involve the practice of law, and thus did not preclude Edwards continuing to be regarded as a trustworthy lawyer. Are they kidding? I wouldn’t trust John Edwards to mail my water bill. Still, I hear this argument all the time in my legal ethics classes. One hypothetical is about a law partner who is caught cheating at poker in a regular game among fellow attorneys. Does that conduct mandate reporting him to the bar for discipline? Most lawyers say no.

Model Rule 8.3, which is substantially the same across all jurisdictions, says,

A lawyer who knows that another lawyer has committed a violation of the Rules of Professional Conduct that raises a substantial question as to that lawyer’s honesty, trustworthiness or fitness as a lawyer in other respects, shall inform the appropriate professional authority.

(a) violate or attempt to violate the Rules of Professional Conduct, knowingly assist or induce another to do so, or do so through the acts of another;

(b) commit a criminal act that reflects adversely on the lawyer’s honesty, trustworthiness or fitness as a lawyer in other respects;

Explain to me why killing Snoopy reflects on a lawyer’s “honesty, trustworthiness or fitness as a lawyer” more than cheating and committing petty theft from people who trust you.

Of course, you can’t. unless Snoopy was Pastor’s client? Killing a client is always bad.

Emotionally, I have no problem with seeing an animal abuser kicked out of my profession, but I don’t understand what values are being applied. Is it the commission of a crime? Most lawyer crimes don’t result in disbarment, if they don’t involve lying, cheating or stealing. Surely the argument used to protect Edwards, which in his case is pure rationalization, actually applies to Pastor. There is no basis on which to conclude that he isn’t competent, zealous and trustworthy—just keep him away from pets.

Now, you may well ask, “Isn’t this at least “moral turpitude?” That’s the character flaw that will keep applicants for bar membership from getting a license due to character deficiency. There are two points related to that. First, moral turpitude might keep you out of the law at the outset, but it is not one of the official no-nos that will get you kicked out of it one you are a practicing lawyer.  The legal  definition of moral turpitude is an act or behavior that gravely violates the sentiment or accepted standard of the community. Brutalizing an animal would certainly qualify. The ABA, however, greatly narrowed the definition as it was applicable to legal discipline:

The 1983 Model Code (periodically amended by the ABA House of Delegates over the last 32 years) rejected the prohibition against “illegal conduct involving moral turpitude.” The ABA’s reason, which it included in a Comment to its Rule 8.4, was quite simple: “Moral turpitude,” the ABA advised, is a “concept can be construed to include offenses concerning some matters of personal morality, such as adultery and comparable offenses, that have no specific connection to fitness for the practice of law. Although a lawyer is personally answerable to the entire criminal law, a lawyer should be professionally answerable only for offenses that indicate lack of those characteristics relevant to law practice.” The American Law Institute’s Restatement of the Law Governing Lawyers § 5 (Third) (ALI 2000), agreed. It also concluded that “moral turpitude” is vague and may lead to discriminatory or otherwise inappropriate applications.”

This looks like an Ick Factor case to me. The abuse of poor Snoopy is so viscerally repulsive that the bar and the courts can’t keep their ethical priorities in order. It is also, as particularly ugly discipline cases often are, a matter of public relations and self-preservation for the legal profession. The bar association knows that not banning a lawyer like Pastor—one hopes there aren’t many–signals to the public that the bar welcomes brilliant advocates who may be monsters in their spare time. That is a dark and dangerous road the profession would rather avoid.

Even the closest precedent makes the New York bar’s decision seem inconsistent:  in a 1993 Maryland case, a lawyer was suspended—but only suspended—for microwaving a cat.