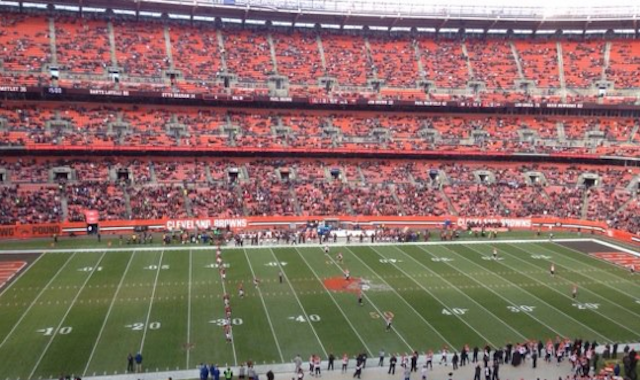 Remember this, the essay a University of North Carolina athlete submitted to one of his courses—he got an A—leaked to the news media in 2014?

On the evening of December Rosa Parks decided that she was going to sit in the  white people section on the bus in Montgomery, Alabama. During this time blacks had to give up there seats to whites when more whites got on the bus. Rosa Parks refused to give up her seat. Her and the bus driver began to talk and the conversation went like this. “Let me have those front seats” said the driver. She didn’t get up and told the driver that she was tired of giving her seat to white people. “I’m going to have you arrested,” said the driver. “You may do that,” Rosa Parks responded. Two white policemen came in and Rosa Parks asked them “why do you all push us around?” The police officer replied and said “I don’t know, but the law is the law and you’re under arrest.

I think about this when I’m reading manifestos from pro football players who think the on-field protests that they can’t adequately explain are vital to national discourse. The protests aren’t, and the protesters aren’t. All of the articles about how protests are inherently patriotic are revealed as lies when the protests they are extolling are this divisive, this costly, and this pointless. The Kneelers are almost entirely filthy rich, maleducated, pampered, narcissist dead-heads whose critical thinking skills are infantile, and whose literacy is dubious. What entitles them to a national canvas every Sunday upon which to scribble their graffitti? Nothing. And by continuing to scribble, they are gradually reducing the visibility of that canvas, as well as the viability of their own occupation, which is short-lived already.

The NFL, meanwhile, is stuck in ethics zugswang by its own incompetence. Allow the players to continue making a mindless Fall ritual of mob ecstasy over the visceral pleasures of watching behemoths in armor crush each other an exercise in cognitive dissonance, and the NFL betrays its ticket-buyers, business partners, sponsors and stock holders. Tell the players to protest on their own time, and the NFL is siding with a President who crossed a line by telling a private business how to manage its employees, and setting itself up as opposing “police brutality,” thus Black Lives Matter, thus African Americans.

Meanwhile, the liberal punditry and news media, which doesn’t give a fig about football, is cheering on the Kneelers even as it drives the NFL into cultural harikiri. It’s a little like some of the more disgusting of the anti-gun fanatics when they reacted to the Las Vegas shooting: “Well, it was a lot of conservatives, so who cares, as long as we can use it to ban more guns.” Same here: Liberals, who are far from the core audience for pro football, are quite happy to see the NFL form a circular firing squad if it furthers “the resistance” and progressive narratives, if even for a little while.

An instructive example was a column earlier this month from the Times’ latest hard left op-ed writer, David Leonardt. Called “The Choice Between Winning And Kneeling,” it purported to be a “protest smart” exhortation to the NFL kneelers, without ever articulating exactly what this foggiest of all protests is supposed to win.

Leonardt begins with five inspiring and completely irrelevant paragraphs about the civil rights protests on the Sixties. This is intended to sanctify the NFL kneelers’ grandstanding, but accomplishes the opposite. That protest movement had clear and specific goals. Blacks and fair Americans wanted an end to Jim Crow. They wanted blacks to be able to vote, as the law said they could. They wanted an end to segregation, and discrimination by public commodities. They wanted to have equal justice under law enforced.

Well, some are protesting one, some are protesting the other, and some are just going along for the ride. By what measure does Leonardt make the factually false statement that violence against African American is “government-sanctioned”? The U.S. government encourages people to kill blacks? No,  it doesn’t.  Leonardt dishonestly links to the Washington Post data base on police shootings, as if this supports his slur.  Among other things, those statistics show more whites shot than blacks. Never mind. Leonardt is just trying to pretend the NFL players have a clue what they want.

We know what legislative and societal measures Martin Luther King wanted. What measures would address the Kneelers’ concerns? A law declaring that police must never shoot blacks when the officers felt threatened? Officers counting to five before using their gun if a suspect is black, and just to three if he’s white? Automatically pronouncing any officer who shoots and kills a black man as guilty of murder? Dispensing with juries when white officers are involved, and using “innocent until proven guilty” as the standard when black officers are involved? Colin Kaepernick thought that any officer who shoots a black man should be automatically suspended without pay, before any investigation. Is that the goal? As I have noted before, “ending systemic oppression”  is just a slogan. It is meaningless. If it is meaningless, so is the protest calling for “something” to be done about it.

Leonhardt doesn’t care. He just wants to promote societal division; it’s the Leftist Way. “From a moral standpoint, this issue is clear. The athletes are right — and have every right to protest as they have. Trump is wrong, about the scourge of police violence and about freedom of speech,” he writes. Really? What are the athletes “right” about? Even they don’t know.  The President has never said that police violence was or wasn’t a problem, but I thought Leonardt just wrote a few sentences before that the protest was about “government-sanctioned violence against African-Americans,” didn’t he? But he linked to a source about police shootings involving all races. Whatever! This is an op-ed for the choir, and not its brightest members, either: there’s no genuine analysis or reasoning, just shotgun endorsement of broad progressive cant. Blacks oppressed. Police bad. Guns bad. United States racist. Trump racist.

Trump, of course, is completely correct about freedom of speech in this matter: employees don’t have a right to turn the workplace into their own, personal Sixties college campus. But, you see, Trump is intrinsically “wrong,” so even when he’s right, it’s wrong.

Then Leonardt, deceitfully urging the athletes to retreat even though they are “right”—about whatever—suggests that they find some other way to display their keen, sophisticated commentary on the complexities of law enforcement–it’s “police violence” again, not “government-sanctioned violence against African-Americans.” Funny, because that’s not what Colin Kaepernick claimed he was kneeling about, and—I hate to say this, but it’s true—most Americans want police to protect themselves and them, with violence, meaning guns. Good progressives like Leonardt don’t like guns. “Violence” is code for guns, you know. Which is ironic, because a lot of NFL players own guns and use them. What are we protesting again? I forget.

So does Leonardt. He writes,

“Do Trump’s opponents want to oppose him in ways that are merely just and satisfying? Or do they want to beat him? “You can’t get angry,” as the longtime activist Vernon Jordan has said, describing a different civil-rights battle, in the 1950s. “You have to get smart.”

Check that essay again. NFL players are only going to get so smart. If they are listening to advice from the likes of Leonardt, and they apparently are, it’s not nearly smart enough. In fact, the op-ed writer is counting on it. See—now the protest is about opposing Trump, and never mind “police violence”or–and?— “government-sanctioned violence against African-Americans.” This is also odd, because the writer just lectured the Kneelers about the importance of patriotic symbols. “Most Americans respect the country’s symbols and because standing is a simple sign of respect,” he says.

You know what else is a symbol of America to most Americans? The Office of the President. It was wrong for this President to punch down at a bunch of grandstanding athletes and their venal, value-free game, but the fact remains, if it’s the NFL against the White House, POTUS wins.

“The athletes shouldn’t apologize for anything. Those who continue to kneel, and draw ire, deserve support. But the smart move now is not to expand a tactic that Trump loves as a foil. It’s to shift toward protests that don’t need a counterintuitive and distracting defense, while he gets to bleat on about America first.”

Most Americans think that America should think about America first, and never have bleated in their lives. They also think that football players should be thinking about football first. Leonardt insults the President of the United States while arguing that it’s foolish for NFL players to show disrespect to American symbols. The shock of Hillary losing has completely severed so many Democrats’ connective tissue with their own nation’s traditions and values. This prime sufferer continues,

The protests can still be aggressive — like the “I can’t breathe” shirts in the N.B.A., and much more. Trump, of course, will blast any protest as some version of uppity. But so what? The target audience are the many Americans open to opposing police violence and a bullying president — but uncomfortable with a gesture that seems to oppose America itself.

Aggressive, or dishonest and stupid? Eric Garner wasn’t shot, and and the police who tacked him weren’t trying to hurt him. That wasn’t “police violence.” that was police incompetence when faced with the challenge of a 350 pound man resisting their authority. Yes indeed, I think they should have been indicted for criminal negligence, but they would have probably been acquitted. Would a 350 pound white man have met the same fate with those officers? I think so. The “I can’t breathe”are almost as incoherent as the Kneelers.  Nice cheap-shot race-baiting there, too, Dave, with “uppity.” I also have no doubt that the President, a former pro football team owner, would have had the exact same reaction if it was all white NFL players protesting during the anthem. I bet you know it too, Dave, but anything to smear that symbol of the United States, the President, as a racist.

What “aggressive” protest can NFL players engage in off the football field that doesn’t involve interfering with the game or imposing their juvenile, half-baked social justice views on people who just want to see a football game and get a few hours away from the culture wars? None. They know it. So does Leonardt. Off the field, most of them will sound and be ridiculous.

Meanwhile, many stadiums around the NFL were obviously missing spectators Sunday in numbers unthinkable just a few years ago. The NFL, frightened of a battle with the union, and of being tarred as racist by people like David Leonardt, announced that it wouldn’t prohibit the protests, knowing that if this continues, the sport may never recover. But Leonardt is cheering, because every Kneeler is an insult to the President–no, no, it’s a moral protest against guns, er, violence, that is police, or oppression, or something. You know, just like Rosa Parks.

I wonder if David Leonardt even watches pro football.

42 thoughts on “The NFL Is In Ethics Zugswang, But It’s For A Good Cause”