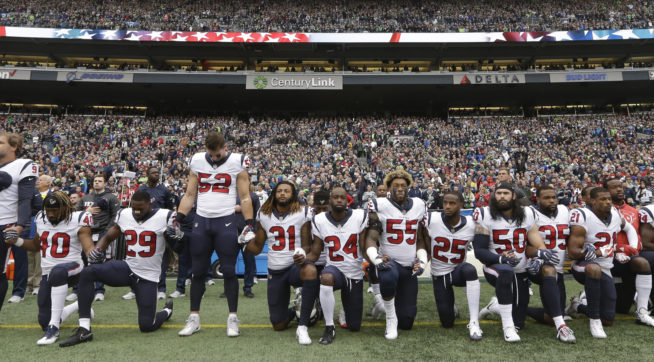 It’s Sunday, so the question naturally arises: What are NFL players kneeling during the National Anthem to protest now?

In Houston, a majority of Houston Texans players “took a knee” during the National Anthem prior to today’s game against the Seattle Seahawks, presumably to protest  team owner Bob McNair’s botched comment last week when he said allowing the protests was like letting the inmates run the prison. He probably meant to say “asylum” rather than prison. NFL players, so many of them being accused or convicted felons, are understandably tender on the prison topic. McNair quickly apologized, but it doesn’t matter.  After all, there has to be some excuse for protesting the Star Spangled Banner, right?

What I can’t figure out is, if you take a knee to protest the incorrect use of hackneyed phrases, does that mean you aren’t protesting social inequities in America? Does such a protest mean these players care more about their hurt feelings than solving social injustice, since kneeling during the Anthem does so much to further that goal?

How are we to tell which NFL Kneelers are protesting racial injustice, which are protesting President Trump’s calling their members “sons of bitches,”which are standing against—well, kneeling against— Colin Kaepernick not being signed just because his dumb stunt last season has propelled the league into a crisis, something only really good quarterbacks are allowed to get away with, or are protesting that third verse of the National Anthem that nobody sings, or the fact that police in shootings involving blacks aren’t just summarily suspended without pay without due process, which was Colin’s beef? Now we have to add the asylum/prison confusion protest to the list? Great.

Why are only Texans players upset about being called prisoners? Or is that what all the other players are kneeling about too? How do we know?

I think the NFL had better designate what the kneeling is supposed to mean before every Sunday, just to be clear. It could be announced over the public address system.Hey, why isn’t anyone kneeling to protest that mean slant-eyed gesture the Houston Astros player made during the World Series? Or Harvey Weinstein—don’t the players care about sexual harassment? Of course, the National Anthem has nothing to do with sexual harassment, but it doesn’t have anything to do with bollixed analogies or Black Lives Matter either.

If the idea is going to be that every NFL crowd is going to be subjected to the Vague and Futile Protest of the Week before getting to see the football game they paid to see  along with the fun spectacle of multiple young men guaranteeing that they’ll be drooling half-wits before they turn 60, I think the NFL should ditch “The Star Spangled Banner” for something more appropriate, like Fats Domino singing, “Ain’t That A Shame?,” or maybe Connie Frances singing “Who’s Sorry Now?” I guess “Imagine” is always an option.

“The world is naturally averse to all truth it sees or hears but swallows nonsense and a lie with greediness and gluttony.”– Samuel Butler