[Mickey is really playing that piano. Boy he was amazing…]

1 A Russian Jumbo!  And it worked! In Russia, Irina Kudinova was charged with mocking the Church after she  posted a photograph that prosecutors alleged was obscene and thus constituted the “deliberate desecration of a religious object” and “insulting the feelings of believers.”   Gee, I can’t imagine why anyone would think THAT..Here’s the photo: 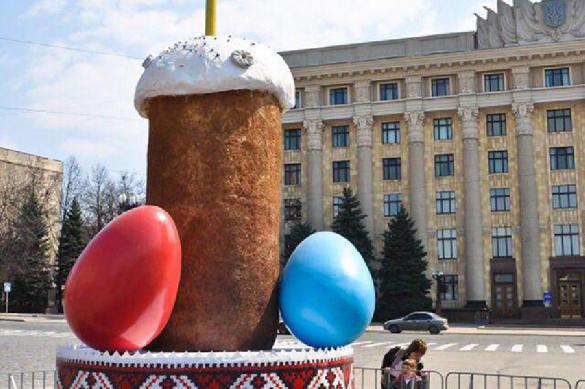 The judge ruled that it was merely a photo of an Easter cake and nothing more. Elephant? What elephant? Or maybe “What elephant phallus?” would be more accurate. Kudinova was awarded 20,000 rubles in a court action for false accusations.

Few cases better illustrate the principle that in Bizarro World attempts at ethical acts become unethical. The problem is that Russia has laws that discourage free speech. In order to undermine an unethical law, the judge in this case made a ruling that is obviously contrary to reality, and what anyone can see with their own eyes. If judges can ignore evidence and deny reality to protect citizens from an unjust law, then they can do the same to unjustly punish citizens who break no laws at all.

I’m happy for Kudinova, but the Russian judge is a well-intentioned ethics dunce. His solution does as much damage as good.

2. “Thanks, Mom and Dad…and bite me.” The parents of GOP Senate candidate Kevin Nicholson each gave $2,700, the maximum allowed, to the primary campaign of the Democrat their son is challenging, Senator Tammy Baldwin. At first I thought this was some kind of tactical move to help their son, like it would be if she were a weaker candidate than her primary opponent. Nope: Nicholson has often spoken about how he was raised in a rabidly Democratic family. Unless Nicholson tortured animals as a child or engaged in conduct similarly unsettling, and the parents know something disqualifying we don’t (in which case they have an obligation to do more than just oppose him, but to expose him), I don’t understand this at all, not with the values I was raised with.

My mother would have supported me if I were running for King of Hell. If my son were running for office, his party and positions would be irrelevant; I’d support my son. I can see the argument that Nicholson’s parents simply have ideological integrity that means more to them than family. I can see it, but I wouldn’t defend it. The only way someone arrives at a decision to place partisan politics over family is when political hate and hysteria have poisoned perspective and priorities. To me, this is like a Red Sox fan cheering for Boston when his son is pitching against the team while playing for the Yankees.

To his credit, Nicholson seems to be taking this betrayal in stride. I’m not sure I would be so gracious. I’m pretty certain my parents and I would not be having Thanksgiving dinner in the same place after that kind of slap in the face.

3. Nah, there’s no media bias! CNN’s “At this Hour” featured the New York Times’ Science and Health reporter Donald McNeil Jr. to discuss the flu epidemic. McNeil attributed an 8% drop in the number of Hispanics getting shots this year in part to President Trump’s “hostility to Spanish language and Hispanics” as well as a “cut back in Spanish-language ads.” He then admitted that the number of all Americans getting flu shots by November has slowly declined in recent years, and that nobody really knew what was causing the fall-off in Hispanic-Americans getting the shots that are readily available to all by walking into any clinic or pharmacy.

Any news organization that is represented on TV by a reporter who defaults to gratuitous Trump-hate without facts or justification needs to discipline that reporter for the sake of its own reputation. That the Times doesn’t shows just how biased and untrustworthy it is, and why public trust in journalism is falling.

And may I add, if you have lived in the United States—legally of course— for more than a short time and don’t know enough English to be able to figure out there’s a flu epidemic, that’s your responsibility, not President Trump’s.

4.  Is the message “Submit to rape” or “Don’t be a jerk”? The story about the 6th grade dance controversy has been irresponsibly slanted in the news media, thanks again to the #MeToo witch hunt environment, leaving ethics in the dust in deference to political correctness and politics.

Utah’s Kanesville Elementary Valentine’s Day dance comes with a directive to 6th grade students that they shouldn’t turn down an invitation to dance. A female student’s mother was horrified, and protested to the principal and the press. The Weber School District confirmed the rule, designed to teach students to be inclusive, polite, and kind. “I do see it from their perspective when it comes to that, but there are many other ways to teach children how to be accepting than with a social dance,” said the “woke” mother. Oh really? I would say that a social dance at that age is the ideal forum to teach such a lesson.

It is not as if the school’s policies don’t allow a student to avoid a particular student and an awkward situation. Prior to the dance, which is voluntary, students are told to fill out a card by selecting five people they want to dance with. The administration says if there’s someone on the card you feel uncomfortable with, the student is encouraged to say so.

Crusader Mom says that rejection is part of life. “Psychologically, my daughter keeps coming to me and saying I can’t say ‘no’ to a boy,” she told reporters. “That’s the message kids are getting.”

Then how about clarifying the message, MOM?  Tell your daughter, “No, dear, the rule exists so mean girls and asshole boys don’t humiliate unpopular students, short students, homely students, poor students, minority students, Jewish students and other kids low on the social scale by publicly marking them as undesirables at an event that is supposed to teach the social graces.”

Sure, rejection is part of life. So are cruelty, discrimination, hate, meanness, and ignorance of the Golden Rule, but those are qualities that schools are supposed to teach students to reject, not practice because after they are adults they should  mature enough to say “no” someone they don’t want to have sex with.

Still hurtling toward “A Nation of Assholes”….

5. Tucker Carlson, call your website... I happen to agree that the official White House portraits of the Obamas unveiled yesterday were affirmatively strange, especially Barack’s, which to my eye looks like the President is about to be eaten by the Wrigley Field outfield wall. Look out, Mr. President!!! It’s right behind you!!!

However the mockery and nasty insults directed at Michelle’s portrait yesterday seem like a concerted effort at payback for a year of “resistance” Trump Hate, and two wrongs don’t make a right.

Particularly ugly were the almost unbroken stream of racist and misogynist insults that dominated the comments on the story on Tucker Carlson’s conservative news and commentary site, “The Daily Caller.” Carlson is now the star of Fox News prime time, and for the website he founded to feature commentary that would sound right at home at a Klan barbecue is, or should be, embarrassing to him, Fox News, and anyone who drops in on the DC for its occasional apt rescue of legitimate stories in the process of being smothered by mainstream media cover-ups.

Ethics Tip: If you can’t or won’t moderate comments on your website to keep out the bigots, the trolls, the racists and the idiots, then don’t allow comments, or don’t start a website.