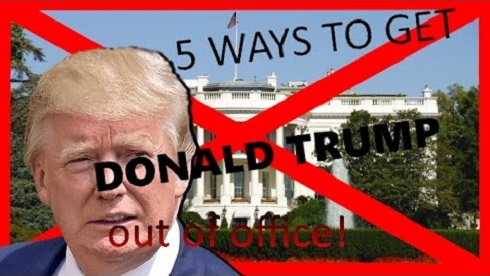 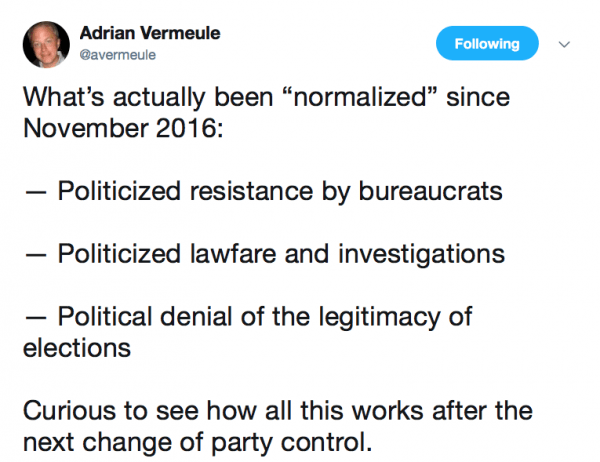 I considered making the profesor’s tweet an Ethics Quote of the Week. I considered using it in an Ethics Quiz: “Would it be ethical to post this on Facebook, knowing that it will convince none of the Trump Deranged among my friends and merely cause their already weakened heads to explode?” I hate memes, and wondered weather this was too close to one to post without hypocrisy. And yet: Prof. Vermeule is absolutely correct. His brief tweet neatly consolidates what Ethics Alarms has been covering since the 2016 election, and why I believe that the progressive/resistance/Democrat/mainstream media/ Deep State alliance”s unethical efforts to delegitimize and undermine this President is doing—and will continue to do—far more damage to the nation than the Presidency of Donald Trump, even if he lived down to his foes’ worst assumptions.

Here is Humble Talent’s Comment of the Day on the post, “The Good Faith Of The Justice Department”: Sure. Humble promised that he would have a lot more to say on the topic. I’m counting on it.

Since the election of Trump, I have seen the brains of otherwise intelligent and competent people liquefy and trickle out their ears in real time.

One of the most interesting symptoms of that liquefaction has been the invention or re-invention of all sorts of professional rules, policies and laws, specifically and discreetly to the detriment of this administration. When something new happens, something that has a burden of proof so high that it has never before been breached…. The Resistance desperately wants that to be the result of an abnormal presidency… But in reality it’s the response that is abnormal… It’s the height of naivete to assume uncritically that this was done properly.

14 thoughts on “Comment Of The Day: “The Good Faith Of The Justice Department”: Sure.”