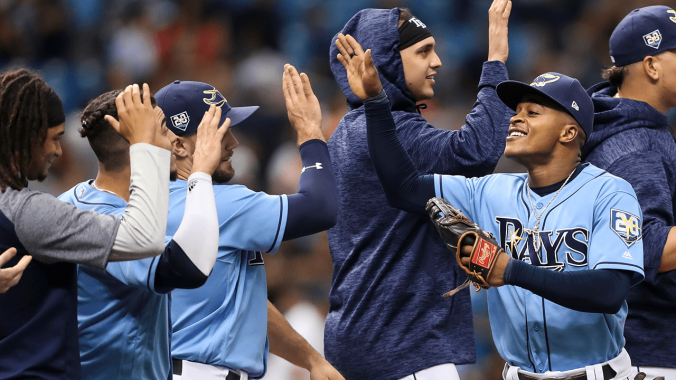 This essay is only incidentally about baseball, but like so many things that sieve through my brain, it was sparked by a conversation about baseball. On the satellite radio MLB channel, one of the interchangeable hosts—I really have trouble telling them apart: some are ex-general managers who nobody will hire, some are ex-players, and a few are sportswriters, but they all seem to say the same things, though one says them with a bilateral lisp—was interviewing a New York sportswriter. That alone would normally prompt me to switch to the Beatles Channel (or the weather), but as I reached for the dial I caught one of the writer’s comments. He was talking about the fact that the New York Yankees’ opponent at the time, the Tampa Bay Rays, were almost a .500 team, and were competing despite a tiny payroll, unlike many other teams this year, which have adopted the controversial strategy of fielding cheap and crummy teams (called “tanking’) in the hopes of getting high draft choices as a reward for  miserable won-lost records.

What a nauseating, unethical position, and how characteristic of the downward trend in American values and spirituality!  It makes no sense to try be a .500 team? This sentiment warps so much in American life today. It translates into the envy, resentment and anger that typical, normal, healthy Americans lug around on their souls all day because they aren’t rich like the people they see on TV, or the neighbor down the street who had wealthy parents and left him a bundle.

Ambition is a great motivator, as long as one understands that achieving one’s goals is often as dependent on chance and chaos as it is on industry and talent, and if you prepare yourself to be bitter about that, bitter is how you are likely to wind up.

I learned to love baseball passionately following a .500 baseball team–indeed a sub-.500 baseball team— that seemed like it would never be anything but. This was in an era where the New York Yankees literally won the pennant every year, with a rare exception now and then. The system was rigged to favor them, and had been for decades. The Boston Red Sox began every season knowing that getting to the World Series was a pipe dream, and their fans knew it too. Nevertheless, they tried. As an almost good team, they had a chance to win every game—not a great chance, when they were playing the Yankees, but a chance. Often the Sox made a good fight of it while going down: our hopes were raised, and there was that wonderful-horrible moment that is the beating heart of baseball where anything can happen from a miracle to a tragedy as the ball is hurtling toward the plate and fate’s resolution. Life is like that, and the sooner you realize and accept it, the better off you are.

The best hitters make outs 60% of the time, and the best teams still lose at least 35% of their games. The typical players and teams do worse than that, just like the typical American, indeed human being, loses a lot more often than he or she wins. The important thing, the thing that undergirds ethics, and integrity, and responsibility, and honor, is that you do the best you can, and pick yourself up when you fail, and try again. It’s not a bromide. It’s the only way to live without going crazy, becoming a serial killer, or surrendering to despair.

Early on in my youthful explorations of literature, I was drawn to the works of Ernest Hemingway. Not because I liked his spare writing style (i didn’t, and don’t) but because his philosophy of life and what made a heroic one was the perfect balm for a Red Sox fan. Hemingway’s heroes always lost in the end, but did so with guts and principles: they lost, but you admired them while they were going down. (The fact that Papa Hemingway killed himself with a shotgun to the head was early evidence that espousing principles and living by them were often very different things, but that’s a story for another day.) He was also right. An ethical life isn’t one that ends in victory, but rather one that accumulates as many small accomplishments , inspirations and moments of positive human interaction as possible on the way to the ultimate defeat, which is death.

Obviously my father helped me understand this too. Dad was a brilliant, eccentric, fascinating man who had more than his share of tragedies and obstacles in his life—certainly a lot more than I have had, in great part because of him. He grew up poor, he was abandoned by his father, and had his foot blown up in the war by an idiot in his own platoon. His career didn’t take off in the directions he hoped for, in part because he refused to follow authority when it was stupid or corrupt. He lost more often than he won, and when he died, his obituary never appeared in any paper. My father, however, had charted out a single priority in life, which was to be the kind of father his own father had not been. He would be home every night to eat dinner with the family, and home every weekend too. He and his beloved and loving wife of 61 years saved and economized so they could pass along resources and security to their children and grandchildren. My Dad could be called a .500 success by some people’s standards—but until the day he died, he did not apologize for the life he led, the choices he made, or his many disappointments and failures to anyone. He was kind, fair, generous, honest and courageous, or tried to be, every moment of his life.

And his son was watching and learning.

Hemingway is out of fashion now, both as an author and as a philosopher. “Winning isn’t everything; it’s the only thing” the quote often attributed to Vince Lombardy but actually the hell-spawn of UCLA  football coach Henry Russell (“Red”) Sanders is the view of life our modern culture projects. If you are powerful and famous, that’s what matters; if you are not, you’re a flop…or a victim.  If you are not as wealthy as someone else who doesn’t seem objectively more deserving than you, then life is unjust: why even try? One reason Americans valued sportsmanship and being “good losers” was that they innately understood that life was losing, you better get used to it, and that there was much more to a meaningful life than making it “to the top.” whatever the “top” was.  Now we have been subjected to a losing Presidential candidate’s non-stop caterwauling about the fact that she lost an election, for 18 months. That’s typical of America’s role models today. If you don’t get what you want, and if what you want isn’t total victory, then life is a tragedy.

Yesterday the Tampa Bay Rays finally reached .500 by beating the Mets (above), despite all of the predictions that they would be a losing team, and all of the critics who said that they would be better off not even trying. The irony is that unlike me when I was 12 and following the hapless Red Sox, most Rays fans don’t even care: the team’s attendance is pitiful. Never mind, though: their team is still dedicated to give the fans who do watch the games a good show, the best they can muster with one of the lowest payrolls in the sport. Maybe they won’t be able to keep their heads above the metaphorical water for the whole season, but they are playing the ethical, noble, Hemingway hero way. They are trying. They are fighting. They have respect for themselves, their duties, and the people who care about them.

That makes them winners to me.

27 thoughts on “Where Have You Gone, Ernest Hemingway? Of Baseball, Tanking, Winning, Trying, And Life…”